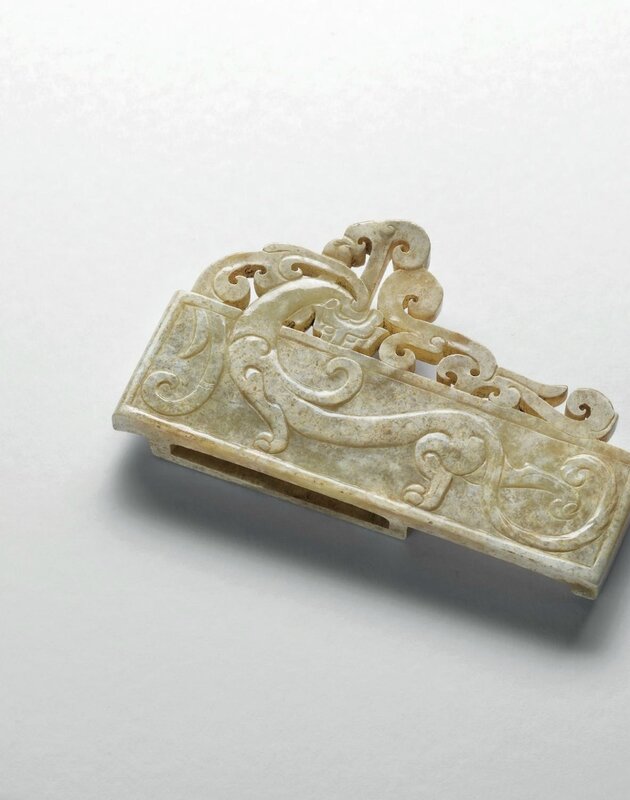 The set includes: a pommel carved on top in relief with two sinuous dragons while the reverse is incised with a band of ruyi-scrolls; a sword slide decorated on one side with a sinuous dragon carved with its head extending over the edge forming part of the flange; and a chape carved with a dragon on one side with its tail continuing towards the other side shown clenched in a bear’s mouth. The sword guard is carved in relief on both sides with angular scroll design centred by a median ridge. The largest: 3 1/2 in. (8.8 cm.) wide.

Note: This exceptional set of sword fittings exemplifies the best jade carving of early Western Han period. Stylistically they are closely related to a set of sword fittings once belonging to the King of Nanyue, illustrated in Zhongguo Yuqi Quanji 4 – Qin, Han, Nanbeichao, Hebei, 1993, pp. 60-61, nos. 79-82 (fig. 1). The Nanyue set is missing the sword slide, while the current set has a matched sword guard. Both sets employ shallow, medium and high-relief carving to vividly depict sinewy dragons emerging from and disappearing into the background of geometric cloud scrolls. This theme, although commonly seen on Han jade carving, is particularly successfully executed here. The dragons are carved with well-defined features and naturalistic musculature, showing a degree of sophistication rarely surpassed even on carvings of the high Qing period.

fig. 1. A set of sword fittings once belonging to the King of Nanyue, The Museum of the Western Han Dynasty Mausoleum of the Nanyue King Collection

On the chape of the current set, the tail of one of the dragons is clenched in a bear’s mouth. This motif can also be seen on the chape of the Nanyue set, and is obviously a popular motif for members of the royal family in the Han period. The origin of this motif can perhaps be traced back to a section from the poem Tianwen (Heavenly Questions) by poet Qu Yuan:

‘Why is there the hornless dragon, carrying a bear on its back as a companion?’

Tianwen is a notoriously arcane literary work, and there are many different interpretations of this particular section. One of which relates to Yu the Great, the mythological ruler of China who introduced flood control. His father, Gun, who also attempted to control the flood but failed, was purported to have been executed by King Shun on the Feather Mountain. His belly was slashed open, from which emerged a yellow dragon (Yu the Great), and Gun himself metamorphosed into a yellow bear. Whether this prose alludes to this particular myth or not, it is proof that the imagery of dragon and bear playing together already existed as early as the Warring States period, and could have connotations of the continuation of life and the succession in the blood lineage of the ruling house.

Christie's. Adorning the Kings - A Private Collection of Archaic Jade Ornaments, 31 May 2017