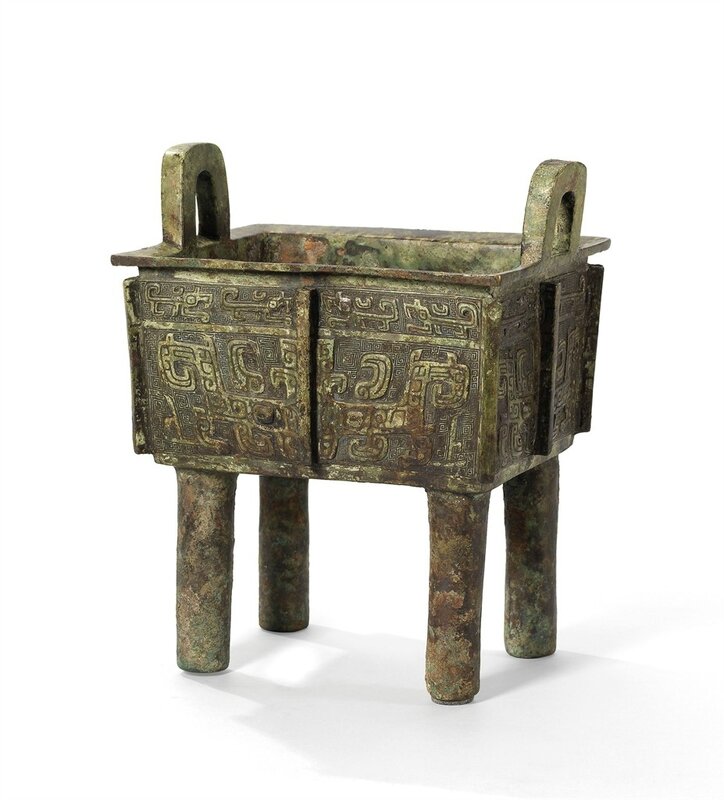 The body is raised on four columnar legs and is cast in rounded relief on each side with a taotie mask below a band of confronted kui dragons, all centred by vertical flanges which are repeated at the corners below the pair of upright handles that rise from the rim. The decoration has black inlay that contrasts with the mottled dark grey and green patina. 10 ¼ in. (25.8 cm.) high, 8 ¼ in. (21.2 cm.) across handles

Note: Square (fang) vessels had great significance to Shang and Zhou ruling elite and are much rarer than their rounded-form counterparts. The first vessel type to be cast in square cross section is the ding, such as the massive early Shang fangding (100 cm. high) found in Duling, Zhengzhou city, illustrated in Shangyi yiyi sifang zhiji, Hefei, 2013, p. 61. Scholars have noted that the casting of fangding is more difficult than round ding and that massive fangding vessels were reserved for nobility of the highest rank and symbolise the royal power (see ibid., p. 60). Two very similar fangding of slightly smaller size (24.4 cm. and 23.7 cm. high) bearing Yachou clan signs are illustrated in Shang Ritual Bronzes in the National Palace Museum Collection, Taipei, 1998, pp. 560-9, no. 96 and 97. Compare also a fangding (22.2 cm. high) sold at Christie’s New York, 22 March 2012, lot 1508. Raised on four columnar supports cast in intaglio with blades pendent from a scroll band, each side of the vessel cast in low relief with ataotie mask below a band of confronted birds, two pairs on the long sides and one pair on the ends, all reserved on a leiwen ground, with flanges dividing each side and at the corners, with a pair of bail handles rising from the slightly inward-canted rim, one side of the interior cast with a three-character inscription, with dark grey and mottled green patina, 8¾ in. (22.2 cm.) high, 7 1/8 in. (18 cm.) across handles.

Note: The inscription consists of the graph che followed by the characters FuXin (Father Xin). A variation of the graph che can be seen incorporated into an inscription cast on a late Shang gu, formerly in the collection of R.D. Minett, which was sold at Sotheby's, New York, 11 March 1965, lot 92. Another variation of this graph can be seen on an early/middle Western Zhou gui illustrated by J. Rawson in Western Zhou Ritual Bronzes from the Arthur M. Sackler Collections, Arthur M. Sackler Foundation, Washington, DC, Arthur M. Sackler Museum, Cambridge, Massachusetts, 1990, vol. IIB, pp. 370-1, no. 40, where the graph is combined with another graph to form the character lu, which in ancient Chinese refers to going on a military campaign.