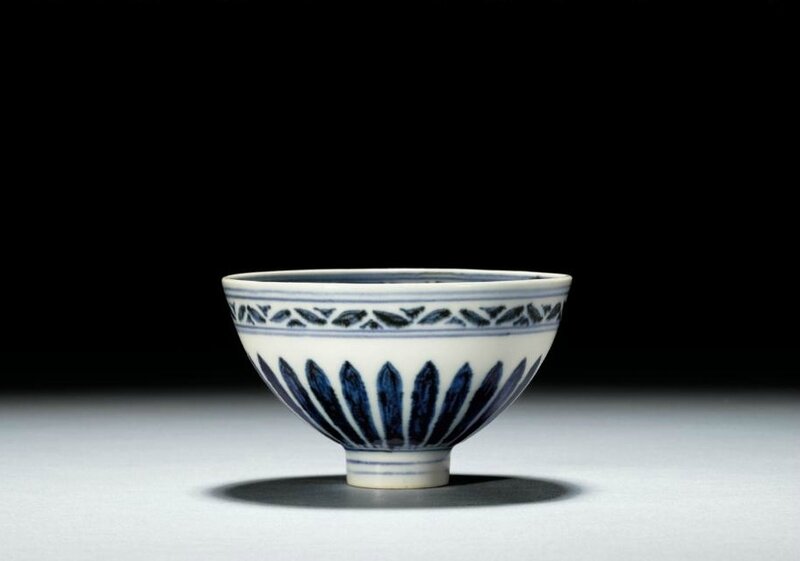 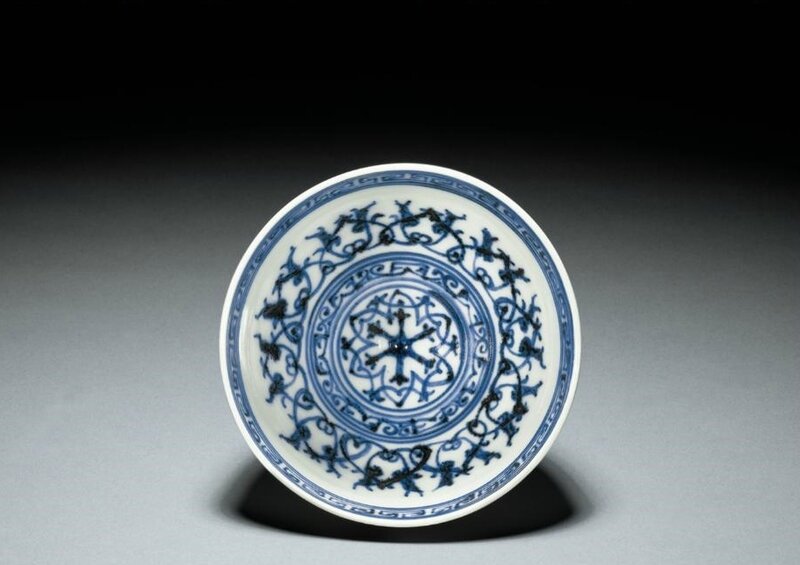 delicately potted with deep rounded sides springing from a narrow foot, meticulously painted overall in contrasting tones of dark cobalt-blue with characteristic 'heaping and piling', the interior decorated in the centre with a stylised six-petalled flower head, encircled by a narrow pseudo-calligraphic meander, within a band of conjoined formal scrolls, all below a keyfret band at the rim, the exterior with a band of slender upright lotus petals beneath a band of zig-zag leaf motifs below the rim, the glazed base rising gently to a central point.

Provenance: Acquired in France in 1984.

Note: Although this bowl belongs to the well known family of lianzi or 'lotus' bowls, which seem to have been popular at the Ming court during both the Yongle and Xuande periods, the present version of the pattern in the interior of the vessel is unusual and appears to be a rare prototype of a more common Xuande design. Jessica Harrison-Hall in Ming Ceramics, London, 2001, p. 114, notes that bowls of this form were made at the imperial kiln at Jingdezhen for imperial use but were also sent to the Near East. For an example of a lianzi bowls found in the Ardebil shrine, Iran, see John Alexander Pope, Chinese Porcelains from the Ardebil Shrine, Washington D.C., 1956, pl. 47, no. 29.326.

See two examples of Yongle lianzi bowls in the British Museum, London, included in Harrison-Hall, op.cit., p. 114, pls. 3:29 and 3:30, where the author mentions a European oil painting representing Madonna and Child, in the National Gallery of Art, Washington D.C., depicting a lianzi bowl. The bowl, 'containing figs, is shown in the painting on a table to the right of Mary and Jesus. It is possible that the bowl depicted is the Xuande version or an Islamic copy of the Chinese bowl. The appearance of this bowl in such a painting is an indication of the high regard in which Europeans held Chinese porcelain in the fifteenth century'. 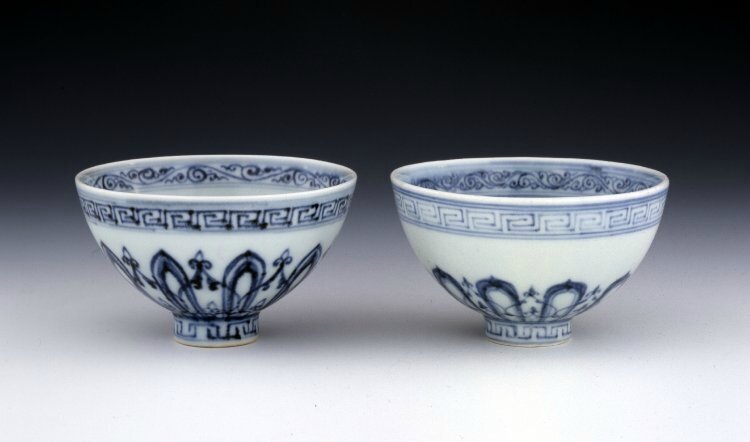 A Yongle lianzi bowl of related design in the Shanghai Museum is illustrated in Wang Qingzheng, Underglaze Blue and Red, Hong Kong, 1993, pl. 50; and another very similar bowl, from the Morrill Collection,  was sold at Doyle, New York, 16th September 2003, lot 86.

For the more common Xuande version of bowls of this type, see a bowl of this elegant shape and related design in the National Palace Museum, Taipei,  included in the Special Exhibition of Selected Hsuan-te Imperial Porcelains of the Ming Dynasty, National Palace Museum, Taipei, 1998, cat.no. 157, together with another related example cat.no. 160. Compare also a bowl in the Beijing Art Museum published in Zhongguo taoci quanji, vol. 12, Shanghai, 2000, pl. 66.