LOS ANGELES, CA.- The J. Paul Getty Museum announced today the most important acquisition in the history of the Museum’s Department of Drawings. Acquired as a group from a British private collection, the 16 drawings are by many of the greatest artists of western art history, including Michelangelo, Lorenzo di Credi, Andrea del Sarto, Parmigianino, Rubens, Barocci, Goya, Degas, and others. From the same collection, the Museum has acquired a celebrated painting by the great eighteenth-century French artist Jean Antoine Watteau.

“This acquisition is truly a transformative event in the history of the Getty Museum,” said Timothy Potts, director of the J. Paul Getty Museum. “It brings into our collection many of the finest drawings of the Renaissance through 19th century that have come to market over the past 30 years, including a number of masterpieces that are among the most famous works on paper by these artists: Michelangelo’s Study of a Mourning Woman, Parmigianino’s Head of a Young Man, and Andrea del Sarto’s Study for the Head of St Joseph (the highlight of the Getty’s recent exhibition on that artist). It is very unlikely that there will ever be another opportunity to elevate so significantly our representation of these artists, and, more importantly, the status of the Getty collection overall.”

“Beyond the core of Renaissance through Rococo works, our modern holdings too are magnificently enhanced by one of Goya’s late, bizarre subjects, The Eagle Hunter, and Degas’s majestic pastel After the Bath (Woman Drying Herself).” Potts added, “No less exciting for the Department of Paintings is the addition of one of Watteau’s most famous and canonical works, La Surprise. It was indeed a very welcome surprise when this lost masterpiece reappeared ten years ago in Britain. And one can see why: the act of seduction portrayed in the painting is matched only by the artist’s delicately flickering brushwork – the combination of titillating subject and charming rendition that made him the most esteemed painter of his day. It will be very much at home at the Getty, where it crowns our other exceptional eighteenth-century French paintings by Lancret, Chardin, Greuze, Fragonard, and Boucher.”

La Surprise is a fête galante, a popular genre depicting outdoor revelry that Watteau invented and which epitomizes the light-hearted spirit of French painting in the early eighteenth century. The scene features a young woman and man in passionate embrace seemingly oblivious to the musician seated next to them. He is Mezzetin, the trouble maker, a stock comic character from the commedia dell’arte. Throughout Watteau’s short but illustrious career – he died when he was only 27 years old – the characters of the commedia dell’arte figured prominently in his paintings, often mingling with elegant contemporary figures in a park or landscape.

Highly admired in the eighteenth century, the painting was thought lost and for centuries was known to art historians only from a 1731 engraving and a copy in the British Royal Collection. In 2007 it was found in an English private collection, becoming the most important work by Watteau to be rediscovered in recent times.

“La Surprise exemplifies Watteau’s delightful pictorial inventions, brilliant brushwork, and refined, elegant compositions,” said Davide Gasparotto, senior curator of paintings at the Getty Museum. “It is undoubtedly one of the most exquisite and important Watteau paintings to become available in modern times. We are now able to present to the public a seminal genre of French eighteenth-century painting in a masterwork by its inventor. La Surprise will no doubt become one of our most beloved and recognizable paintings.” 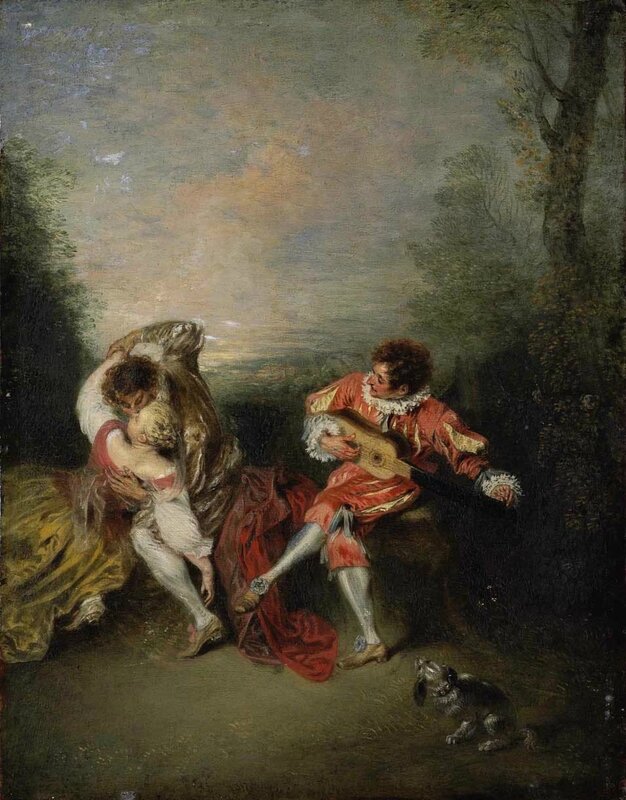 The painting and all of the 16 drawings were purchased as a group from a British private collection. The drawings are mostly Italian but there are also exceptional works by British, Dutch, Flemish, French, and Spanish artists. A nucleus of Italian Renaissance works anchors the group, including a rare and beautiful “cartoon” (full-sized direct transfer drawing for a painting) by Lorenzo di Credi; one of Andrea del Sarto’s finest drawings (from the collection of artist-writer Giorgio Vasari); and Michelangelo’s powerful pen and ink study of a mourning woman, a famous discovery made at Castle Howard, England in 2000.

Other highlights include Parmigianino’s exquisite ink drawing of the head of a young man; Savoldo’s Study for Saint Peter; Beccafumi’s Head of a Youth; and Sebastiano del Piombo’s Study for the Figure of Christ Carrying the Cross. From the post-Renaissance period, the collection also features a masterful head study of Saint Joseph by Barocci; Rubens’s powerful oil-on-paper study of an African man wearing a turban; Cuyp’s panoramic View of Dordrecht, one of the great landscape drawings of the Dutch Golden Age; and Giovanni Domenico Tiepolo’s drawing Punchinello Riding a Camel at the Head of a Caravan, a brilliant example of the narrative mastery for which Tiepolo was admired.

Goya’s The Eagle Hunter, a darkly satirical brush and ink drawing depicts a hunter wearing a metal cooking pot for a helmet while precariously suspending himself over a cliff to try to snatch young eagles from a nest.

Degas, arguably the greatest draftsman of the nineteenth century, is represented by two drawings, a sheet with two chalk studies of ballet dancers, used by the artist for no fewer than three paintings, and a large and startlingly bold pastel showing his unrivalled innovation in that medium.

“Any one of these sheets on its own is truly extraordinary and would be a worthy and meaningful acquisition for the Getty. Together, the 16 drawings form an unparalleled roll call of the ‘best of the best,’ with iconic sheets by some of the world’s most celebrated artists,” said Julian Brooks, senior curator of drawings at the Getty Museum. “This powerful group of works represent the finest aspects of Western art history captured on paper. I am eagerly anticipating sharing these masterworks with our visitors as well as our international scholarly and museum community.”

While the majority of works are currently at the Getty Museum, some are still pending export licenses from the U.K. Research on further drawings from the same collection, with a view to possible acquisition, is currently underway. Plans are also proceeding to display the group together at the Getty Museum in a special installation in the near future.