STOCKHOLM.- Nationalmuseum has acquired two Italian scenes by Danish golden age artists: Loggia on Procida by Martinus Rørbye (1835) and The Temple of Minerva at the Forum Nervae by Constantin Hansen (circa 1840). Each piece in its way represents some of the finest work produced by north European artists on their travels to the south. What is more, the two paintings are unusually effective in expressing the strong emotions experienced by the artists on a personal level as a result of their encounters with the atmosphere and architecture of the south.

Rørbye and Hansen were two of the most prominent artists in early 19th-century Denmark, during the golden age that began around 1810 and continued into the 1860s. This half-century saw the creation of great artworks and a widespread flourishing of creativity in the realm of culture and science, in spite of the worst conditions imaginable. The economy was in a miserable state, and Copenhagen was in ruins after bombardment by the British navy. These impoverished times spawned an art that transformed water into wine by depicting quite unremarkable everyday scenes and localities with a passion and depth that created immortal images. The foundations of this art were laid by Christoffer Wilhelm Eckersberg and his pupils, among them Martinus Rørbye and Constantin Hansen.

The two newly acquired oil sketches are exquisite examples of how the artist brings out the potential in an apparently humdrum scene by emphasising certain features. In Martinus Rørbye’s case, the subject is a simple loggia on the island of Procida off the coast of Naples. Three years earlier, in 1832, the Norwegian artist Thomas Fearnley had visited the same loggia and painted it from practically the same spot. Since the two artists were socially acquainted in Rome, Rørbye had probably seen Fearnley’s painting and felt drawn to the place. Judging by Rørbye’s painting, he was not disappointed by the reality; rather, it seems to have induced a mood of sheer lyricism. The painting acquired by Nationalmuseum is the one painted on location, the first of three versions. According to Rørbye’s diaries, which are in the process of publication, the artist kept this first version to hand as a model when reworking the scene in Italy. The treatment of light and shadow and the way it conveys the special character of the place make this sketch one of the more lyrical examples in golden age art of how the painter’s gaze could be transposed to the canvas.

Constantin Hansen travelled to Italy in late 1835. Even before departure, his explicit objective was to devote himself to architectural motifs and ornamental painting. Hansen had started out studying architecture in Copenhagen before switching to an artistic career. During his early days in Rome, he complained in his letters home that the large exhibition pieces he was working on were taking up all his time. He would have preferred to devote his efforts to subjects that appealed to him on a more personal level. A number of sketches in this vein exist from Hansen’s decade in Rome, conveying the artist’s strong emotional response to certain places and buildings. The sketch of the temple of Minerva is a perfect example of the artist’s ability to translate his impressions into an image in a short space of time. The artist’s sensuous experience of the façade seems inseparable from the act of painting. Hansen’s depiction of the motif is perhaps best described as a declaration of love. The inspiring nature of this painting is surely why it was once owned by Janus La Cour, one of the artists who, in the 1860s, transformed Danish art by letting the painting itself and the brushwork play a more prominent role in creating the image.

The purchase of these works has been made possible by a generous donation from the Wiros Fund. Nationalmuseum has no budget of its own for new acquisitions, but relies on gifting and financial support from private funds and foundations to enhance its collections of fine art and craft. 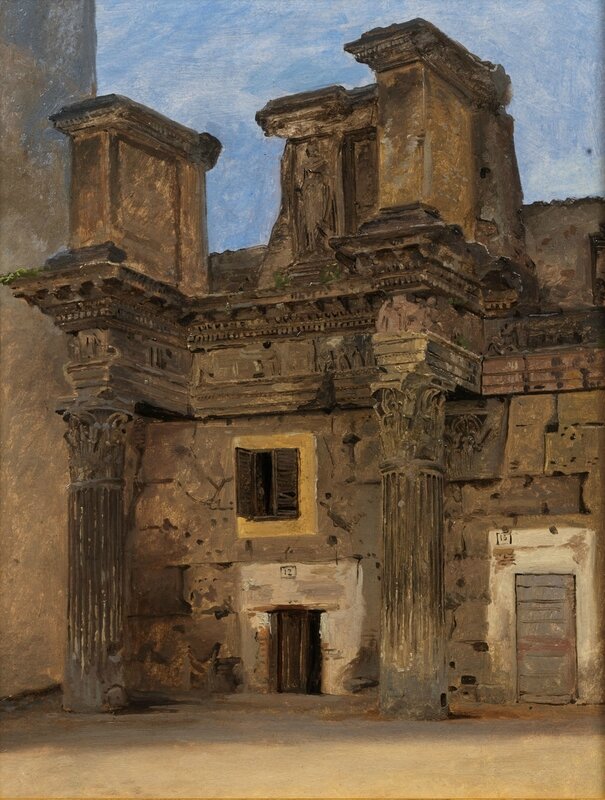 Constantin Hansen, The Temple of Minerva at the Forum Nervae, circa 1840. Photo: Anna Danielsson/Nationalmuseum.