An important and rare blue and white moonflask, bianping, Xuande six-character mark in a line and of the period (1426-1435)

An important and rare blue and white moonflask, bianping, Xuande six-character mark in a line and of the period (1426-1435) 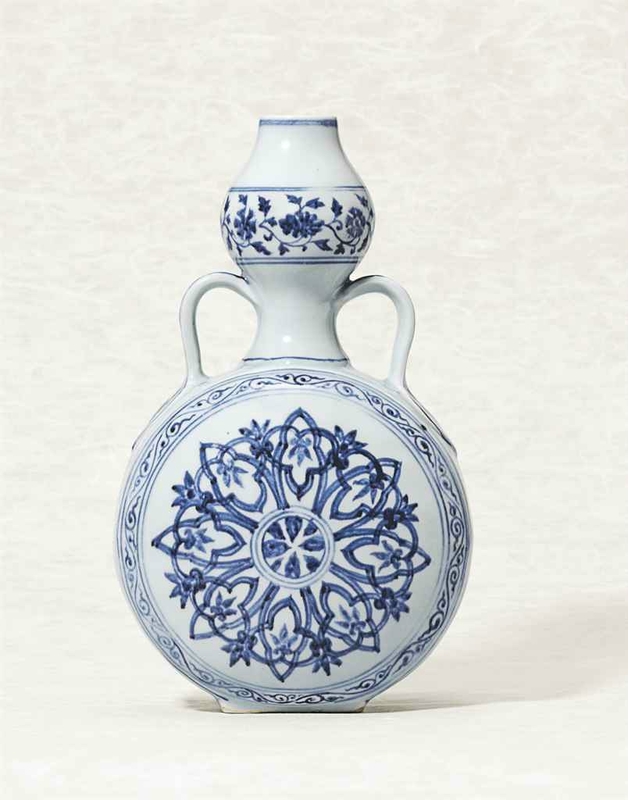 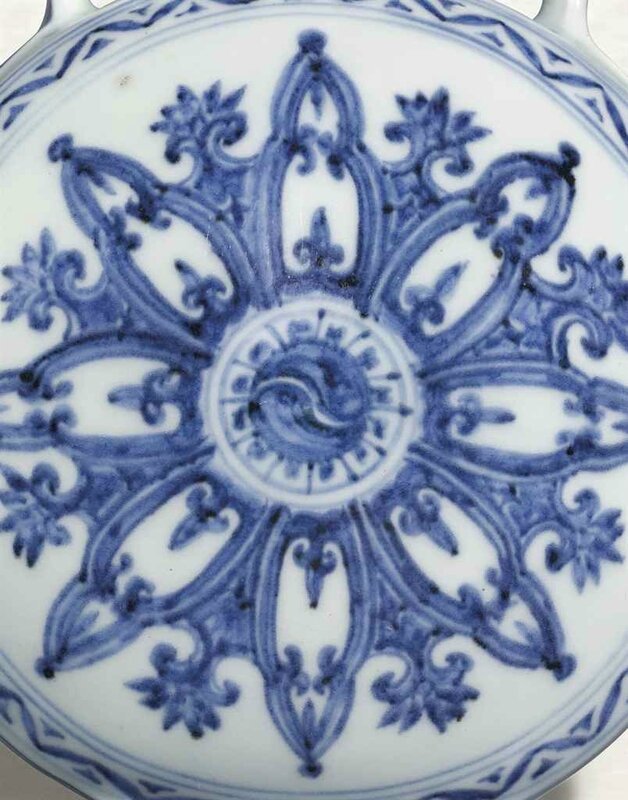 The elegant flask is well potted with a flattened, but slightly domed, circular lower section and a globular upper section narrowing to a short neck and a mouth contracting to match the width of the waisted area between the upper and lower sections of the vessel. The flask stands on a rectangular foot and has strap handles on either side, joining the neck and shoulders of the vessel, with petal-shaped terminals on the shoulders. The six-character mark is written between two sets of double lines below the mouth rim. Around the upper bulb is a mixed floral scroll, including dianthus, which entered the Chinese decorative repertoire from the Near East. Both of the circular flattened sides are bordered by 'half cash' bands, surrounding a different arabesque roundel on each side. At the centre of the arabesque roundel on one side is a yinyang symbol surrounded by petals, while on the other side at the centre is a small roundel containing alternately sized inward-pointing petals inside a triple-line circle. Each of the handle terminals is decorated with a floral spray.

For most connoisseurs of Chinese ceramics the so-called moonflasks are classic Chinese porcelain forms. However, the form has a surprisingly long history in Western art, although it is probable that the Chinese early Ming dynasty form was inspired either by metalwork or glass of the Islamic era.1 However, one of the earliest flattened circular flasks with handles joining the mouth of the vessel to the shoulder on either side of the neck can be traced back to the ancient world. Perhaps the most famous versions of this form, sometimes referred to as a 'stirrup jar', is the unglazed pottery flask decorated with an octopus painted in dark brown, which was found among the late Minoan artefacts at Palaikastro on the island of Crete. The Minoan flask dates to about 1500 BC, and thus was contemporary with the Shang dynasty in China.2

One version of the Chinese ceramic moonflask shape, which has no upper bulb, but simply a circular body with rounded edges looks as though should have its origins in two bowls being stuck together rim to rim, although in fact the early Chinese form is luted horizontally, not vertically. The Minoan flask, however, appears to have been made in precisely the former method, and the foot of the bowl can be seen in the area of the octopus's eyes. Although somewhat less flattened than some of the later vessels from various other cultures, early pottery flasks such as the Minoan example must have been their ancestors. Examples of slightly later vessels are the flattened circular flasks from Nineveh - in this case with their handles on the shoulders - dating to the Parthian period (150 BC-AD 250), which is roughly contemporary with the Han dynasty in China.3 Looking at the carved and pecked decoration on certain of these Parthian vessels, some scholars have suggested that it is reminiscent of stitching, and harks back to the shape's origins in leather, although the twin-bowl Minoan vessel from more than a thousand years earlier should be borne in mind.

A number of glazed pottery flasks of flattened circular form with handles on either side of the neck are found among Sassanian ceramics (AD 224-642). A small Sassanian flask with turquoise glaze, from Sus, in the Iran Bastan Museum, is close to the Parthian example, and reasonably close to one of the early fifteen century Chinese porcelain vessels - the strap handles joining the lower part neck, if not the mouth.4 A green glazed earthenware pilgrim flask, also from Sus, dates to the Sassanian period (AD 224-642), and is also in the collection of the Iran Bastan Museum, Teheran.5 This flask has flat encircling sides forming a relatively sharp junction with the front and back circular panels, which are noticeably domed, similar to later metalwork examples, and also similar to the lower section of the Riesco flask. Interestingly a similarly shaped flask - circular with sharp angles to flat sides - was made in China during the Liao dynasty (916-1125), and a green-glazed example - without handles, but with six loops spaced around the flat sides for suspending the vessel from a saddle - was excavated from a tomb in Inner Mongolia in 1965.6 Unlike most early circular flasks this vessels stands on a rectangular foot similar to that on the Riesco flask.

A number of similarities can be seen between this 10th-11th century vessel and both the flattened double-gourd flasks made in China in the Yongle and Xuande reigns - such as the Riesco example - and the large, flat-backed Chinese porcelain flasks without an upper section, which were made in the early 15th century, with loop handles on the sides of the vessel.7

A distinct foot can also be seen on a green glass flask in the Tareq Rajab Museum in Kuwait (fig .1).8 This is a Syrian flask from the late 7th or early 8th century - contemporary with the Tang dynasty in China, and was made of mould blown and cut glass. A vessel of identical form was found in an excavation at Tarsus in south-eastern Anatolia in the 1930s, in a context with Umayyad and early Abbasid pottery. The handles attach only to the lower part of the neck of this vessel. Although these glass forms could have made their way to China, as Near Eastern glass was much appreciated in the Tang dynasty, metalwork seems a more likely inspiration for the specific form of the Riesco flask. There is a somewhat larger Syrian brass canteen, dating to the mid-13th century, in the collection of the Freer Gallery, Washington,9 which is of very similar form to the lower section of the Riesco flask and has close similarities with the single section, flat-backed flask sold by Christie's in November 2007 (fig. 2). Interestingly the brass canteen is decorated with Christian imagery as well as calligraphy, geometric designs and animal scrolls. This Syrian mid-13th century brass canteen in the Freer Gallery appears to be the only published example of such a metal vessel, but it shares a number of features with the form of the Riesco porcelain flask, having both a bulb-shaped mouth and similarly S-form handles. When the flattened flasks with upper and lower section in double-gourd form appear in porcelain at the Chinese Imperial kilns at Jingdezhen in the early 15th century, they appear with two distinct proportions, and in both plain white and blue and white. The larger vessels with a height of about 30 cm tend to have a smaller upper bulb in proportion to their lower, flattened, section, while the smaller version, with a height of about 25 cm. tend to have a more generous upper bulb in proportion to the lower, flattened, section. A plain white example of the larger type from the Yongle reign (1403-24), which was excavated from the early Yongle stratum at the Imperial kilns, is illustrated in Imperial Porcelain of the Yongle and Xuande Periods Excavated from the Site of the Ming Imperial Factory at Jingdezhen, Hong Kong, 1989, pp. 92-93, no. 5. A blue and white Yongle flask of the smaller size is in the collection of the British Museum.10 This flask has the same decoration as the Riesco Xuande example. Another example of the smaller type is in the S.C. Ko Tianminlou Collection (fig. 3). Although large and smaller flasks decorated and undecorated were made in the Yongle and Xuande periods, the Yongle vessels usually stand on an oval foot, while the Xuande examples usually have a rectangular foot. The Yongle vessels do not have reign marks, while some of the Xuande flasks, such as the Riesco example, have the reign mark written in underglaze blue in a horizontal line below the mouth.

It has been suggested by some authors that these flasks, particularly the blue and white examples with decoration clearly inspired by Islamic arabesques, were made solely for export to the Islamic West. However, one crucial piece of evidence suggests that this is not entirely true. A shard from one of these flasks, bearing the same decoration as the Riesco vessel was excavated from the Yongle/Xuande stratum at the site of the early Ming dynasty Imperial Palace in Nanjing.11 Clearly these elegant flasks were also appreciated by the Chinese court in the first half of the 15th century.

Commentaires sur An important and rare blue and white moonflask, bianping, Xuande six-character mark in a line and of the period (1426-1435)