A very rare blue and white 'Eight Buddhist Emblems' dish, Chenghua six-character mark within double circles and of the period

A very rare blue and white 'Eight Buddhist Emblems' dish, Chenghua six-character mark within double circles and of the period Delicately potted with shallow rounded sides rising to slightly flaring rims, the dish is painted on the interior with the Wheel of the Law supported on a lotus spray, enclosed within double-line borders, below a lotus scroll on the cavetto, with each bloom supporting one of the other seven Buddhist Emblems. The exterior is decorated with the Eight Buddhist Emblems, each positioned above a lotus plinth borne on a foliate scroll.. Note: The motif of the Eight Buddhist Emblems with each symbol supported on a lotus bloom, first appeared on porcelain during the Yuan dynasty, and remained popular through the Ming dynasty. The popularity of this motif on porcelain reached an unprecedented height during the later period of the Chenghua reign, a phenomenon attributed by Liu Xinyuan to the emperor's heightened interest in Buddhism and Daoism in his later years, as reflected by the incessant religious activities revived at court, and the enormous amount of resources dedicated to the construction of temples and monasteries. See a discussion on this relationship, of the Chenghua emperor's religious penchant and porcelain production, in the introductory essay in Legacy of Chenghua, Hong Kong, 1993, pp. 29-30.

The design on the current dish is unusual in that a single Buddhist Emblem, Wheel of Law, has been singled out and prominently placed at the centre and surrounded by the remaining seven Buddhist Emblems on the cavetto. An almost identical example is in the Shanghai Museum, illustrated by Lu Minghua in Mingdai guanyao ciqi, Shanghai, 2007, p. 224, fig. 4-20; another is from the Percival David Collection, now housed at the British Museum, published in Oriental Ceramics: The World's Great Collections, vol. 6, Tokyo, 1982, no. 34; and a third in the collection of Lord Au Bak Ling. An example with the same decoration on the interior but with lotus sprays on the exterior is in the National Palace Museum, Taipei, illustrated in Catalogue of the Special Exhibition of Ch'eng-Hua Porcelain Ware, Taipei, 2003, p. 50, no. 24; and another of this type with the mark enclosed within double squares was excavated from Phase III of the Chenghua strata at Jingdezhen, see ibid, p. 228, no. C70. Compare also to another unpublished example from the Eugene Fuller Memorial Collection in the Seattle Art Museum, accession no. 36.57, which is included in the museum's online archive, though showing only an image of the interior. 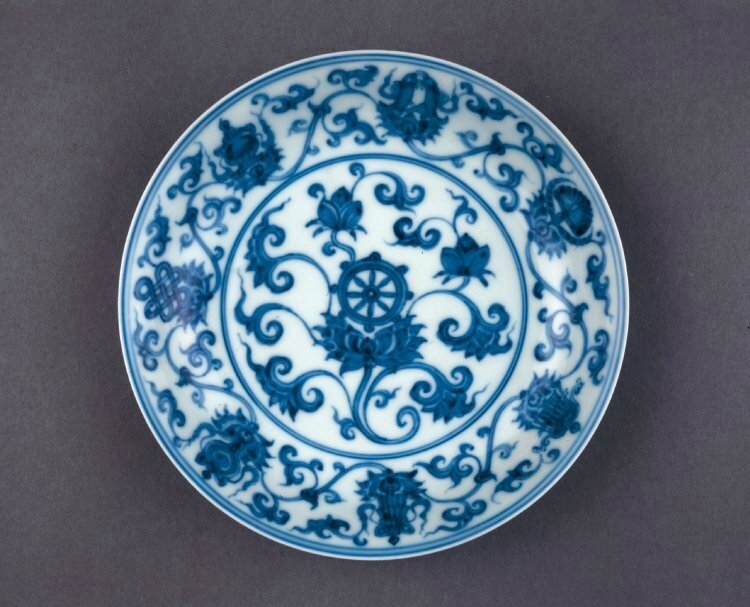