A reserve-decorated blue and white 'Hundred Cranes' jar, Wanli six-character mark within double circles and of the period

A reserve-decorated blue and white 'Hundred Cranes' jar, Wanli six-character mark within double circles and of the period 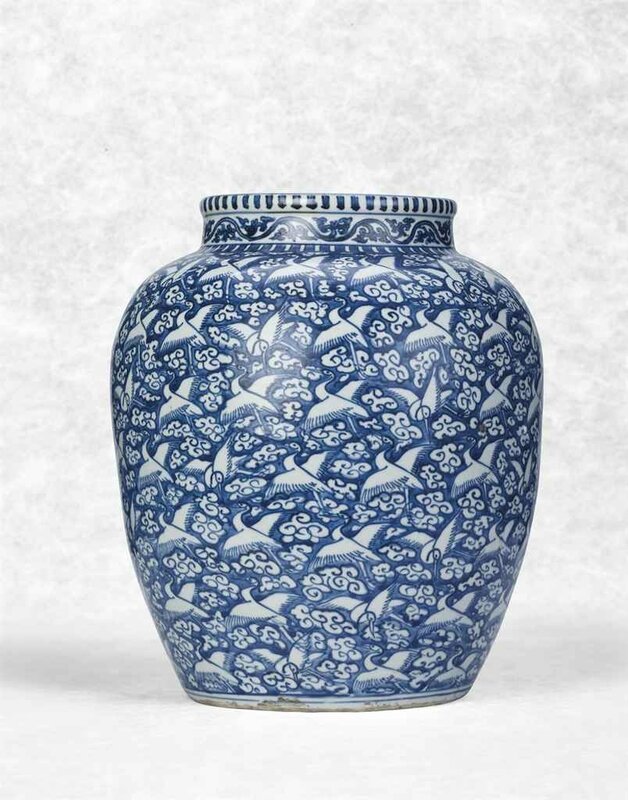 Of ovoid form, the sturdily potted jar stands on a recessed base below a short neck with a lipped rim. The exterior is profusely painted with cranes in flight amidst clouds against a blue ground below a classic scroll encircling the neck. The base is unglazed with the exception of the recessed centre which is painted with a six-character mark within double circles, Japanese wood box.

Note: Cranes, as symbol of longevity, were a popular motif on Chinese ceramics. The design on the present jar known as 'hundred cranes', was therefore particularly auspicious. Reserve-decorated design was a feature of mid-Yuan and Xuande wares, but it fell from use during the later 15th century and early 16th, and became popular again in the Jiajing and Wanli periods, particularly those of birds and floral motifs.

A similar jar is in the collection of Shanghai Museum, illustrated by Lu Minghua in Studies of the Shanghai Museum Collections, Ming Dynasty Ceramics, p. 57, fig 1-75. Compare also to two similar jars in private collections, one was included in the Exhibition of Ancient Chinese Ceramics from the Collection of the Kau Chi Society of Chinese Art, Hong Kong, 1981, Catalogue, no. 88, the other was included in Enlightening Elegance: Imperial Porcelain of the Mid to Late Ming, The Huaihaitang Collection, Hong Kong 2012, Catalogue, no. 121. Another example was sold at Christie's New York, 15 September 2009, lot 351.

Commentaires sur A reserve-decorated blue and white 'Hundred Cranes' jar, Wanli six-character mark within double circles and of the period