The vase is finely potted with a pear-shaped body gently tapering to an everted rim and supported on a slightly flaring foot. It is delicately incised to the body with flowering and fruiting pomegranate branches above a register of lingzhi lappets, between bands of classic scroll andruyi-heads at the neck and a band of Wan symbols around the foot. The vase is covered with an even unctuous white glaze, box.

For many connoisseurs the pear-shaped vases (yuhuchunping) of the Yongle reign represent the most elegant manifestation of this classic form. While Yuan dynasty vessels often have a pleasing delicacy, they are rarely well-finished and their luting lines are often all too evident. In the Hongwu reign the bodies of pear-shaped vases became significantly wider, to the extent that in a number of cases the harmony of the shape was lost, while evidence of luting lines often remained a problem. In the Yongle reign the proportions of pear-shaped vases achieved what many would regard as a perfect balance - with the widest point of the vessel occurring lower down the sides of the vase and providing pleasing proportions with the width of the neck and mouth. The finishing of these vessels is also fine, with luting lines skillfully disguised. While these features are important to those vases decorated in underglaze blue, they can best be appreciated on exquisite white-glazed vases such as the current example.

White-glazed pear-shaped vases from the Yongle reign are extremely rare. However, two white-glazed yuhuchunping of much coarser quality than the current vessel were excavated in 1960 from the tomb of Song Sheng, Marquis of Xining, who died in AD 1407. The original 1962 excavation report in Kaogu stated that four of these pear-shaped bottles were found and that they measured 31 cm. in height, but the Nanjing and Beijing authorities confirmed to Sir John Addis that there were only two and these measured 26 cm. in height (illustrated and discussed by J.M. Addis in Chinese ceramics from datable tombs, London and New York, 1978, p. 94-5, pl. 37j). Judging from illustrations these excavated vases, from a tomb dating to the beginning of the Yongle reign, are closer in form to those of the mid-14th century than to those of the early 15th century.

Excavations undertaken in Yongle strata at the Imperial kiln at Jingdezhen have revealed that more than 90 per cent of the pieces found were white-glazed. Although no images of excavated tianbaipear-shaped vases appear to have been published, excavators have recorded that amongst the early Yongle white wares unearthed in 1982-4 from stratum four and stratum five in the middle section of Zhushan Road were pear-shaped vases (see Liu Xinyuan in Imperial Porcelain of the Yongle and Xuande periods Excavated from the Site of the Ming Imperial Factory at Jingdezhen, Hong Kong, 1989, pp. 58-9). Illustrations have been published of a tianbai-glazed vase of more compressed and flattened, but essentially pear-shaped, form which was also excavated from the early Yongle strata in 1984 (illustrated ibid., p. 103, no. 10). This latter vase has a peach-shaped raised panel on each side, and provided the prototype for later vases of the Jiajing reign. However, a pear-shaped vase decorated with underglaze blue five-clawed dragons excavated in 1984 from the late Yongle stratum at Jingdezhen is much closer in form to the current vase, although slightly smaller (illustrated ibid., p. 169, no. 43). Two more Yongle blue and white yuhuchunping, which are similar in size to the current tianbai-glazed vase, have been published (illustrated in Imperial Hongwu and Yongle Porcelain excavated at Jingdezhen, Taipei, 1996, nos. 60 and 61). These vases, which are both decorated with floral scrolls, were excavated in 1994 from the Yongle strata at Dongmengtou, Jingdezhen.

The beautiful white glaze on this vase is of a type known as tianbai'sweet white'. As discussed in the introductory essay in this catalogue (pp. 10-11) the Yongle emperor had a particular fondness for white - especially white jade and white porcelain. It is probably this imperial preference that inspired the development of the so-called tianbai glaze. This glaze has a rather different appearance to that of earlier white glazes. The tianbai glaze has virtually none of the bluish or greenish tinge, which was seen on the earlier qingbai and Shufu glazes made at Jingdezhen in the Song and Yuan dynasties. It was made almost entirely from glaze stone with little or no glaze ash. The glaze was lower in calcium oxide than earlier white glazes, and was higher in potassium oxide. The body of tianbai wares had a higher proportion of aluminium oxide than previous Jingdezhen porcelains and required a higher firing temperature. The result of these changes in composition and firing was a whiter body covered with a purer white glaze than had previously been achieved. The texture of the glaze was also different to that of previous Jingdezhen white wares. The glaze had a silky, unctuous texture, with none of the glassiness seen on qingbai wares. The glaze contained many tiny bubbles, densely distributed in the glaze, which scattered the light as it passed through, imparting an almost jade-like quality. The tiny bubbles which burst on the surface of the glaze also created tiny pin-prick holes, and gave the surface its subtle, characteristic, 'orange-peel' effect.

Research by the Chinese scholar Liu Xinyuan has revealed that this glaze was not known as tianbai in the 15th century (Liu Xingyuan in Imperial Porcelain of the Yongle and Xuande Periods Excavated from the Site of the Ming Imperial Factory at Jingdezhen, op. cit., p. 71-2). Liu discovered that it was not until the late 16th century that Huang Yizheng in his Shiwu gan zhu, published in the 19th year of the Wanli reign (AD 1591) used the phrase zong yan tian bai. It seems likely that by zong yan, which literally means 'bristle holes', he meant the tiny little pin-prick holes left by the burst bubbles on the glaze surface. Presumably the author was likening these tiny holes to those that might be left if the ends of single hairs were pressed into the surface. Liu also draws an interesting parallel between the use of the term tianbai, sweet white, and the discovery of a method for making white sugar at some point in the Jiajing reign (1522-66). This discovery is noted in a Qing dynasty publication Hexiangguan suo yan, a miscellany by Ding Guojun. Liu suggests that as white sugar, as opposed to dark sugar, was a relatively new phenomenon and was a fashionable condiment in the late 16th century, Huang Yizheng may well have been inspired to use it as a reference for the greatly admired white glaze.

Liu Xinyuan has also noted that imperial admiration for white porcelain continued into the early part of the Xuande reign (See discussion ibid., p. 70). Liu believes that white wares were probably still predominant in the early part of the reign and cites Korean archives (Li Chao shi lu) relating to the gifts brought by Chinese imperial envoys to the Korean court in 1428 and 1429. The first gift consisted of equal numbers of white-glazed and blue and white porcelains, while the second gift consisted of white porcelains for fifteen table settings. Imperial gifts bestowed on honoured Chinese subjects also included white porcelain in the early Xuande period, as in the case of Yang Rong, who, according to his selected writings in Yang Wenmin Gong ji, received in 1426 not only writing implements used by the emperor himself, but also a variety of white porcelain vessels. Four years later the emperor bestowed upon Yang gifts of 'platinum, pearls, cash and white porcelain ...'. These records seem to confirm Liu Xinyuan's view that the refined tianbaiglaze, developed in the reign of the Yongle Emperor, continued to find considerable favour with his successor.

This current vase is enhanced by very refined decoration, which does not detract from its elegant form and subtle, jade-like glaze. The decoration is incised with a very fine point into the body, beneath the glaze. It is only if the viewer has the privilege of handling the vase that they can fully appreciate the decoration. As discussed in the introduction to this catalogue (pp. 10-11), the form of fruiting sprays in decoration on Yongle porcelains was almost certainly inspired by woodblock-printed illustrations in books such as materia medica. It is significant, for example, that the decoration on the current vase depicts both fruit and flowers on the pomegranate sprays, as this is how they were shown in such books on plants. The pomegranate would have been chosen for its auspicious wishes, since a ripe pomegranate, its skin split and its seeds visible, provides the rebus for liukai baize, 'Pomegranate revealing one hundred sons', or qianzi tongmo, 'One thousand sons within the same generation'. It was important for every family, especially the imperial family, to have sons. The flowers of the pomegranate also carried an auspicious wish, since pomegranate flowers were often worn by women, because of the fruit's association with the provision of sons, and the red colour of the flowers were believed to ward off evil, especially during the festival of Duanwujie.

A similar white-glazed pear-shaped vase with incised floral scrolls is in the collection of the Topkapi Saray Museum, Istanbul. The neck of this vessel has been cut down and 17th century metal mounts have been added by Ottoman craftsman turning it into a matara flask (illustrated by J. Ayers and R. Krahl, Chinese Ceramics in the Topkapi Saray Museum Istanbul, vol. II, p. 525, no. 635). Related Yongle vessels include a vase formerly in the Tsui Museum of Art and illustrated in the museum catalogue, Hong Kong, 1991, no. 60; another in the Pilkington Collection, illustrated by Adrian M. Joseph, Ming Porcelains, Their Origins and Development, London, 1971, no. 94; and one formerly in the H.R.N. Norton Collection, sold at Sotheby's London, 26 March 1963, lot 56. An example from the Baur Collection, decorated with pomegranates within quatrefoil medallions, is illustrated by Daisy Lion-Goldschmidt in La Porcelaine Ming, Fribourg, 1978, p. 76, no. 41 (fig. 1). 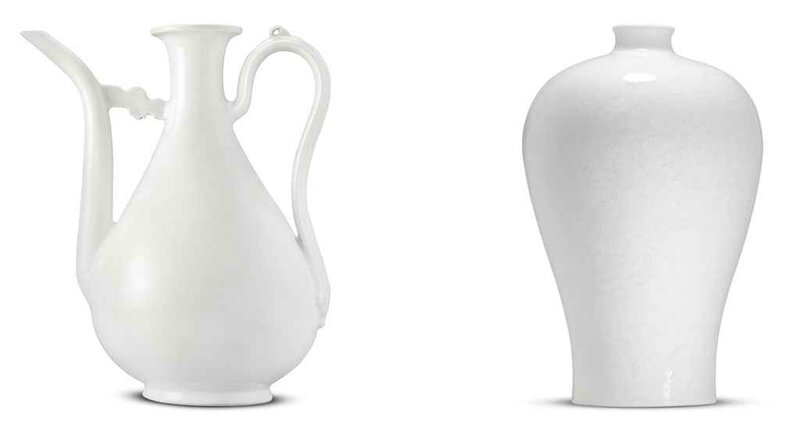