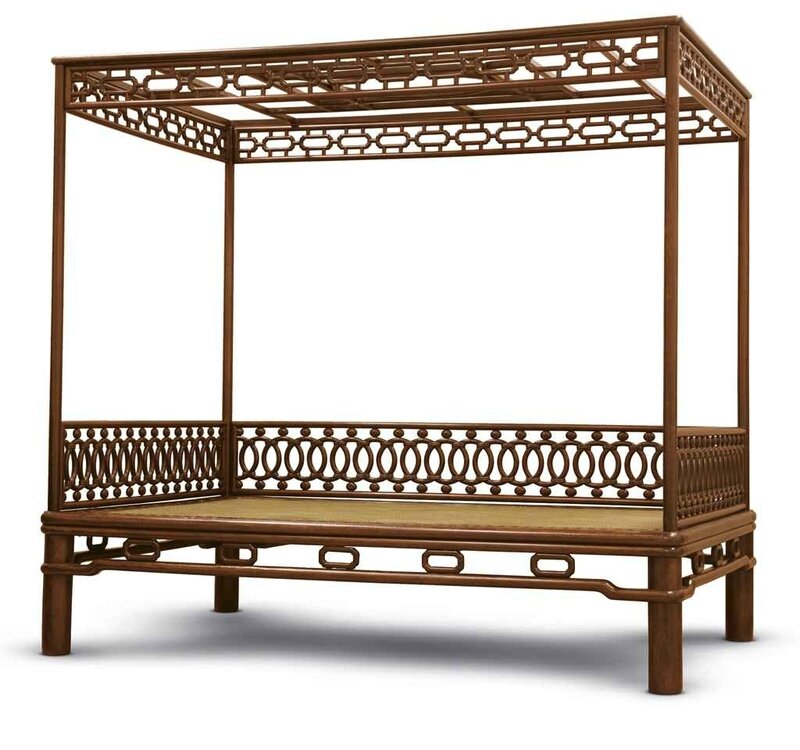 The rectangular mitred bed frame with soft mat seat is supported on sturdy legs of circular section joined by humpbacked leg-encircling stretchers separated by oval braces set at regular intervals. The back and side railing panels each have interlocking circles carved of one piece of wood bordered above and below by carved circular braces. The upper canopy panels are set with slightly squared oval braces separated by oval struts.

Note: Four-poster canopy beds in huanghuali are an extremely rare form and the simple but arresting interlocked hoop motif on the present lot makes it all the more unusual. A woodblock picture dating to 1640 illustrated by Sarah Handler Austere Luminosity of Chinese Classical Furniture, California, 2001, p. 145 shows an example of a four-poster canopy bed but very few other extant examples are known. A closely related huanghuali example from the collection of Robert and William Drummond, with these interlocked hoops, but also interlocked double braces above them, is illustrated by Gustav Ecke, Chinese Domestic Furniture, Hong Kong, 1978, p. 36, no. 25. The same bed, described as being in the Arthur M. Sackler Collections, is also published in Journal of The Classical Chinese Furniture Society, Spring 1992, p. 11, fig. 9, in Sarah Handler's article, A Little World Made Cunningly: The Chinese Canopy Bed, where the author mentions that the interlocked circles appropriately symbolize eternal unity and marital harmony. A drawing of a four-poster bed with interlocked circular braces on the upper part of the railing is illustrated by Wang Shixiang, Connoiseurship of Chinese Furniture, Hong Kong, 1990, vol. II, p. 134, C15. Another example with more angular latticework and supported on complex cabriole feet was sold at Christie's New York, 16 September 1998, lot 81.

The present example differs from the Sackler bed primarily in the upper canopy and the lower half. Instead of a plain apron with cabriole legs, this lot has a leg-encircling pieced apron with oval braces and straight legs. This gives the effect of airiness which is echoed in the openwork oval struts of the canopy. The use of the leg-encircling apron also refers to the decorative motifs of bamboo furniture.

It has been suggested that the four-poster bed was more likely to have been found in the men's apartments, with its ideal of 'pleasant refinement and elegant simplicity without stylish adornment', cited by Wen Zhenhang in Zhang wu zhi, Treatise on Superfluous Things, compiled in 1615-20. The six-poster 'wedding bed', often a dowry brought in with the bride, was more likely to be found in the women's quarters.