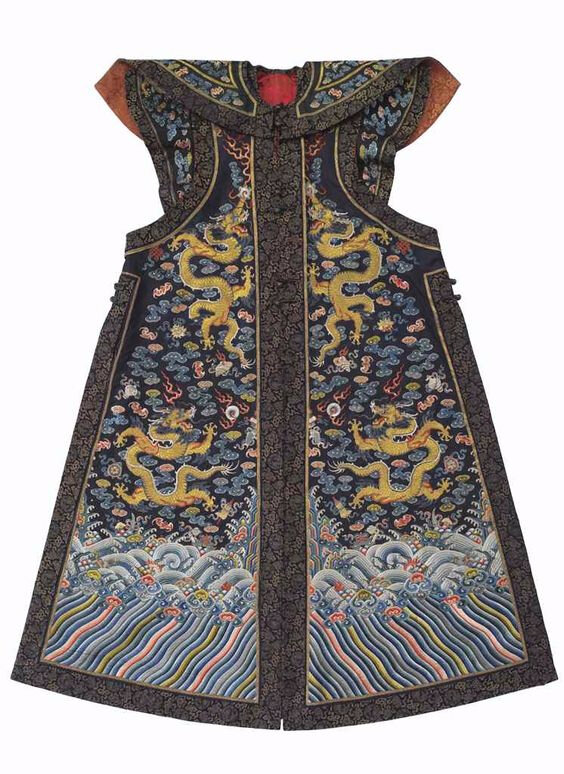 The vest is finely embroidered with five-clawed dragons clutching flaming pearls amidst ruyi-form clouds and auspicious symbols, all above the lishui stripe and terrestrial diagram, and all in couched gold thread, satin stitch, and Peking knot in shades of blue, peach, and yellow on a midnight-blue ground. The detachable sleeves and collar,piling, are similarly decorated, 53 ¾ in. (136.5 cm.) long.

Provenance: Collection of Mrs. J.O. Saul given by Mr. and Mrs. William Frey.
Gifted by the above to the High Museum of Art, Atlanta, Georgia, 1968.

Note: Chaofu, or ritual wear, was the most formal category of clothing at the Qing dynasty court. For imperial women a chaofu ensemble included a petticoat, a full-length robe with long sleeves, front overlap and shoulder projections (chaopao), an over vest (chaogua), a cape-like collar (piling) and an appropriate hat and accessories.

The Qing dynasty chaogua was adapted from the dragon-patterned sleeveless coats worn unofficially at the Ming dynasty court. The mid-eighteenth century court dress edicts assigned three styles of this garment to the upper ranking court women. All were made of dark navy blue silk and featured a center front opening held with five toggle and loop fastenings, angled shoulder seams and deeply cut armholes. The first and second styles were tailored as multi-sectioned constructions with horizontal bands of dragons, clouds and waves. The third style was full length without sections. For the empress dowager, empress and three highest ranking imperial consorts the decoration of this style of vest featured a pair of large profile long, or five-clawed dragons amid clouds above waves, on the front and back of the garment. For lower-ranking women of the imperial clan, the decoration decreased the size and increased the number of profile dragons to four on the front and two on the back, with a frontal dragon above. A third style, which could be worn by all ranks of women including the wives of nobles not related to the imperial clan and the wives of other high officials featured mang, or four-clawed dragons.

A very similar chaogua is illustrated in G. Dickinson and L. Wrigglesworth, Imperial Wardrobe, Berkeley and Toronto, rev. ed., 2000, p. 181, pl. 163. Compare, also, two chaogua of this type in the collection of the University of Oregon Museum of Art, illustrated by J. Vollmer, Decoding Dragons: Status Garments in Ch'ing Dynasty China, University of Oregon, 1983, pls. 18 and 93.