Chinese Gold and Silver in the Carl Kempe Collection, The Museum of Art and Far Eastern Antiquities in Ulricehamn, Ulricehamn, 1999, pl. 3

Fittings like the present example were probably applied to the reins of a harness and examples were discovered in sites associated mostly with the state of Qin in Shanxi and Shaanxi province. A similar ornament cast in bronze and gold was discovered at Fengxiang Doufu village in Shaanxi province, in a large pit filled with the remains of chariots and horses and dated to the Warring States period; another harness ornament by cast in silver and bronze and with the heads turned inwards was unearthed from the tomb of the King of Zhongshan at Pingshan in Hebei province, illustrated in Simon Kwan and Sun Ji, Chinese Gold Ornaments, Hong Kong, 2003, p. 198. 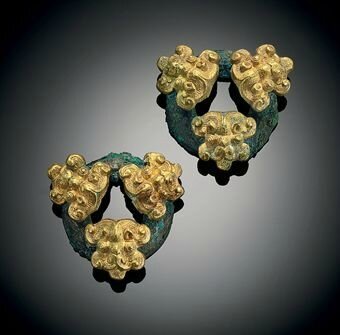