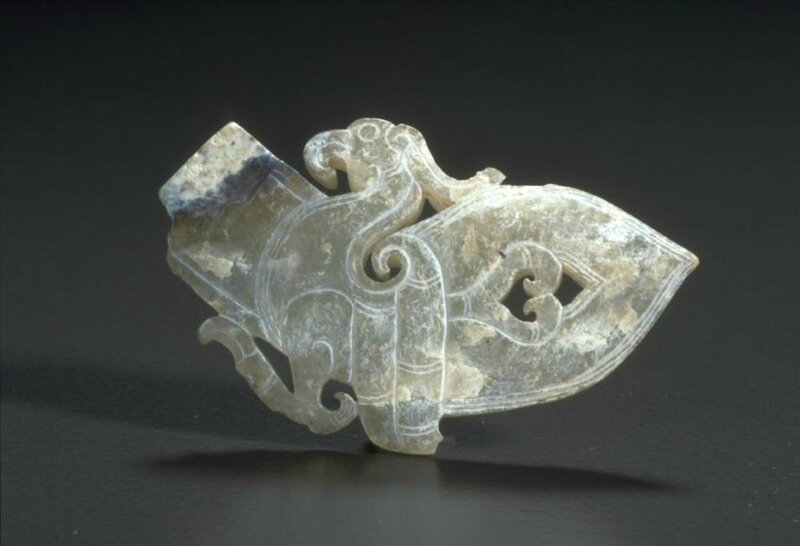 The majority of jades from the late Spring and Autumn period and early Warring States period are some form of personal adornment. Many are parts of the elaborate pendants which were the fashion of the time, while others were hairpins (#40), and, at a slightly later date, elements of belthooks. During the Warring States period, other types of ornaments became more common; chief among them were fittings for weapons, in particular swords and their scabbards (see #s 52-57 ). In a relatively few examples jade was apparently used for funerary shrouds. It is difficult to place this small ornament in any of these categories.

The tang coming from the breast of the bird was obviously meant to be slotted into a larger object. However, it is designed in such a fashion that the bird would have been perpendicular to the object, rendering it impractical for a sword or other utilitarian object. It is perhaps one of the increasing number of decorative pieces that appeared in the later Warring States and on into the Han dynasty.

The bird is a motif commonly associated with the south, in particular the states of Wu, Yue, and Chu during this period. Its appearance in jades is evidence of both the increasing influence of the arts of these states on those of the cultures around them and the fact that these states were major consumers of jades themselves.

This piece is irregularly cut from very light colored Khotan jade. The stone is grey to white in color, very translucent, and appears to have numerous small black inclusions. The surface has been altered by burial and has areas that have been stained white and brown. The surface of the stone is very irregular with multiple curves and recessions. Nevertheless, it is finely polished.