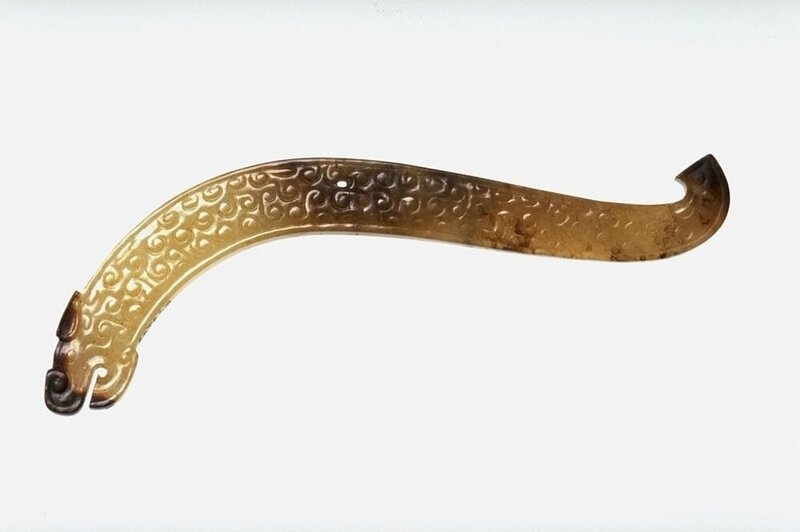 The xi is normally a dragon with a pointed end thought to be the bottom-most piece in the pendant assemblies of the late Spring and Autumn and Warring States periods. Although described as a xi by most experts, this piece may instead be a pei, a piece which occurred in the middle portion of the pendant. This piece has the suspension hole near the center; most xi are suspended nearer the head and would occur in an upright position. However, it is difficult to imagine how another series of parts of the pendant would be suspended from this piece, except by attaching something at the mouth. Obviously, much remains to be determined about how the individual pieces in the pendant assemblies worked as a whole.

The overall surface decoration on this piece consists of abstract patterns, either as comma- shaped units or commas linked together to form large C shapes. It is much more simple than the surface decor on the Spring and Autumn period pieces discussed above. This simplification may be due in part to an increased demand for jade pendants. The designs are not in as deep relief as the previous piece; appearing to be cut into the surface rather than raised above it. The ears of this dragon are decorated with very fine cross-hatch patterns and the mouth is indicated by fine parallel striations which follow its profile.

Creating these fine patterns must have been extremely difficult and suggests technical breakthroughs that were occurring during the late Spring and Autumn and Warring States periods. In order to create them, a high speed drill with a very fine point would need to have come in contact with the surface of the jade in a very controlled fashion. Whether the drill was fixed and the piece moved against it or vice versa is not entirely clear. Later practices would indicate the former.

This piece is thinly cut from a light colored Khotan jade with yellow and brown tones. There are significant areas of staining on the head, near the center, and on the tail. The stone is very translucent and appears to have few, if any, inclusions.