PHILADELPHIA, PA.- Freeman’s September 9 Asian Arts auction will offer collectors a wide array of Asian fine and decorative arts. A highlight of the sale is the collection of Mr. and Mrs. Gaylord and Pamela Watkins—including a fine group of Song to Ming dynasty ceramics and related wares of Southeast Asia— and a complementary private Pennsylvania collection, giving collectors and connoisseurs the rare opportunity to bid on a range of wares not often brought to auction. Additional highlights include Chinese paintings from private collections by such masters as Pu Ru (Lot 556, “Scholar Seated in a boat,” $10,000-15,000), Fan Zeng (Lot 569, $50,000-80,000, acquired directly from the artist’s studio at the suggestion of Robert Ellsworth in 1979), and Liu Dan (Lot 577, $20,000-30,000). Provenance: Acquired directly from the studio of the artist by the present owner, while traveling through China with Robert Ellsworth in 1979.

Note: The present work is a large and attractive example of the artist's exploration of the theme of the Northern Song dynasty painter, Yi Yuanji, going to the wild and interacting with monkeys to observe and paint them. Of baluster form, hexagonal section, with spreading shoulder, waisted neck, flared lip and spreading foot; the neck and body decorated with elaborate lotus and chrysanthemum composite scrolls, the neck, shoulder and lip with leiwen-scroll and stylized lappet borders, an additional band of classic scroll at the shoulder, a band of crashing waves at the foot; the underside with six-character seal mark.

Provenance: In the collection of the present owner prior to April of 1985

Note: Examples of vases of the present scale and decoration are rare. For comparable vases see the examples sold at Sotheby''s Hong Kong, October 23, 2005, lot 357 (where it was noted a similar example was sold in those rooms, November 5, 1996, lot 820); and the example sold at Sotheby''s Hong Kong, April 4, 2012, lot 3239 (where it was noted at the time that only three examples were known) Possibly depicting one of the Shiwang, or judges of the afterlife, the seated dark-faced dignitary with elaborate headdress and draped robes depicted with clasped hands, a dragon entwined about his throne, the reverse inscribed with a lengthy dedication dated Zhengde tenth year, sixth month, 24th day.

Provenance: Alistair Sampson Antiques, Ltd, London
Acquired from the above by the present owner at a New York Asian Art show.

Finely worked, each depicting a sinuous five clawed dragon among scrolling clouds, Buddhist symbols and crashing waves, a "Shou" symbol above each head. Framed, matted and glazed. H: 14 in., 35.6cm ; W: 12 in., 30.5cm. The transcendant crowned Buddha seated in padmasana with hands in modified bhumisparsha mudra, on a stepped throne with atlante supports, an elaborate mandorla behind enclosing five additional Buddhas; beneath the throne, a roundel enclosing a vase of peony blossoms, above, apsaras bearing a parasol canopy, all among colored clouds, and on a patterned ground, ink and colors with gold on silk, framed, matted and glazed.

Provenance: Acquired by the present owner from a Southampton, New York estate (by descent from a New York family) Possibly the Jain Goddess Padmavati, the voluptuous bejeweled four-armed goddess depicted seated in rajaliasana, holding attributes including a lotus bud and rosary, her face with almond-shaped eyes, a faint smile on her lips. H: 33 1/2 in., 85.1cm; W: 17 in., 43.2cm; D: 7 1/2 in. 19cm.

Provenance: Mme. Viviane Harroch, Villefranche sur Mer, France
Acquired from the above by the present owner The globular jar with pinched and ridged neck, the shoulder decorated with two silvery stylized birds in flight. Accompanied by a copy of Oxford Authentication thermoluminescence analysis report No.: P108g75, dated 11 March, 2008, stating the results are consistant with the proposed dating of this object.

Provenance: Property from the Collection of Mr. and Mrs. Gaylord and Pamela Watkins. 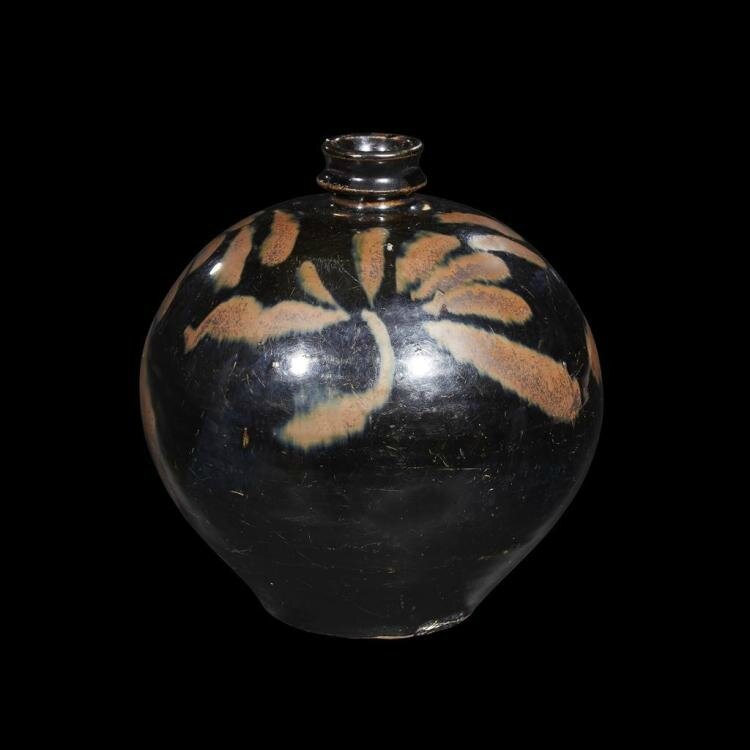 Of globular form with pinched and ridged neck, the neck decorated with three stylized iron-brown cranes in flight. H: 7 3/8 in., 18.8cm 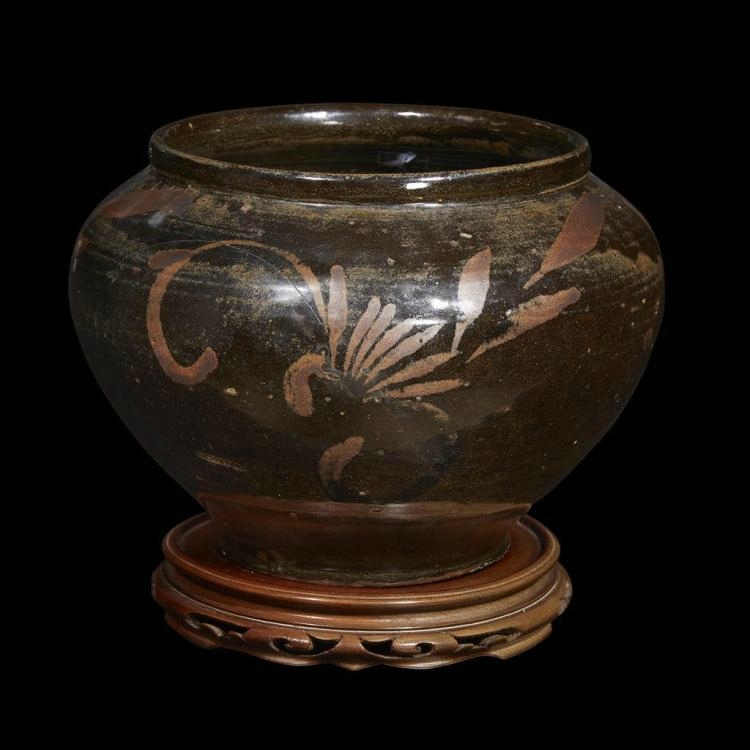 The shoulder decorated with three iron-brown birds in flight. The globular body with squared shoulder, tall, slightly flared neck, ridged loop handle, and short curved spout. Accompanied by a copy of Oxford Authentication thermoluminescence analysis report No. P102s84, dated 5 August, 2002, stating the results are consistant with the proposed dating of this object. The hemispherical bowl raised on a short circular foot, the slightly domed cover with small scroll finial, the exterior with an attractive russet-brown, slightly matte glaze, the interior of the bowl with a creamy slip.

Provenance: Property from the Collection of Mr. and Mrs. Gaylord and Pamela Watkins. The interior moded with stylized floral scrollwork, the exterior with incised "petals.", a fine olive-green glaze overall, pooling in the carved patterns.

Provenance: Property from the Collection of Mr. and Mrs. Gaylord and Pamela Watkins.
Acquired from KenSoon Asiatic Art Pte Ltd., Singapore, May 4, 2007.

“What makes the collection more unusual is the representative selection of Southeast Asian wares,” Ben Farina, Department Head of Asian Arts said. “This includes the products of Vietnamese, Thai and Burmese kilns. The Southeast Asian ceramics are diverse, illustrating a broad range of types and forms.”

These include an elegant Vietnamese white-glazed “lotus” jar and cover, Ly dynasty, 12th-13th century (Lot 170, $5,000-7,000), several Vietnamese blue and white-decorated dishes, boxes and vessels influenced by Yuan and Ming dynasty blue and white porcelains (Lots 175-183), two rare Burmese green-decorated white-glazed bowls (Lots 189 and 190, $700-900 each), and a broad range of Thai dishes and vessels from the Sawankhalok, Phan and Kalong kilns. These Thai celadons were inspired by the celadons of the Longquan kilns of Song, Yuan and early Ming China which were so widely treasured by the societies of maritime Asia and the Middle East. Several of these Southeast Asian pieces have been published and discussed in “Southeast Asian ceramics, New Light on Old Pottery” edited by John Miksic, of the National University of Singapore. “ 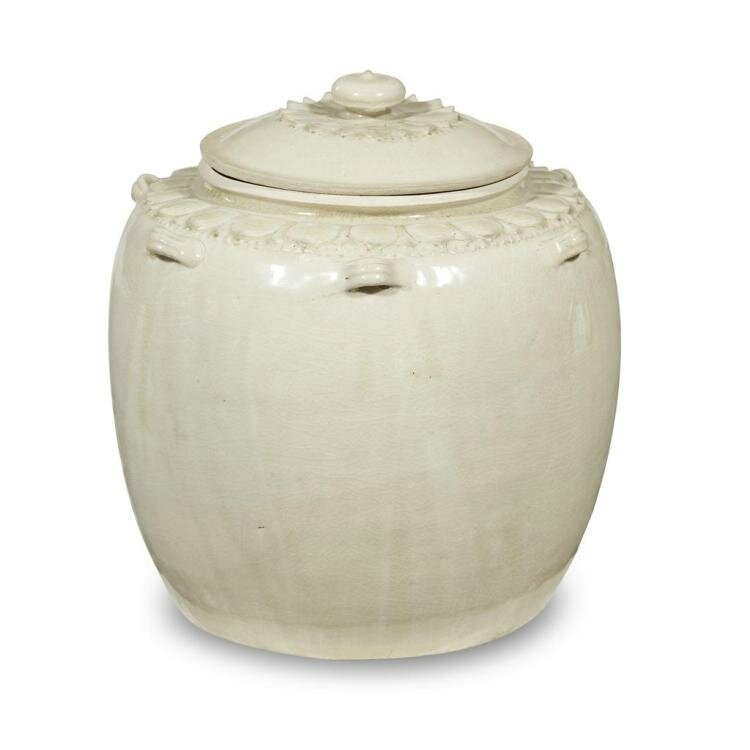 The cover and shoulder finely modeled with lotus petals and six small lug handles, the glaze pooling to a pale celadon tint.

“Freeman’s is pleased to have been given the rare opportunity to present such a diverse collection, which not only illustrates the rich trade links forged between the societies and cultures from the 10th-17th centuries in East Asia, but which also serves as a tribute to the eye of the collectors, who so carefully assembled a group of works as aesthetically pleasing as they are reminders of the history of this important region of the world,” Farina remarked.