Doyle to auction Asian works of art on September 11

Doyle to auction Asian works of art on September 11

NEW YORK, NY.- Scheduled during the week of Asian sales in New York, Doyle's Asian Works of Art auction on Monday, September 11 at 10am presents the arts of China, Japan and Southeast Asia from the Neolithic Period through the 20th century. Offerings include porcelain, pottery, jade, scholar's objects, bronzes, screens, furniture and paintings.

Highlighting the auction is property from a Private Minneapolis Collection. Comprising 23 lots in the sale, the Collection is particularly rich in Chinese jades and Khmer and Sino-Tibetan bronzes.

The selection of jades features an 18th century celadon and russet jade peach-form box carved with unfurling leaves, blossoms and bats, length 5 3/4 inches. The box is notable for its construction utilizing naturalistically carved branches to skillfully interlock both halves. The peach (shoutao) is the fruit of immortality, and the bat (fu) is a pun for blessings. Together they represent a wish to possess both blessings and immortality (est. $20,000-30,000). Naturalistically carved as a large peach, borne on a gnarled stem issuing an abundance of unfurling leaves and scattered floral blooms and buds, the branch extending up and around the fruit and worked to link the box and cover together, the cover with two large bats resting on the stems, the stone an even tone with caramel brown and russet inclusions, fitted wood stand and silk covered box. Length 5 3/4 inches. The rounded sides formed by overlapping lotus petals, raised on a low foot formed by three furled petals, the side set with a Buddha seated on a double lotus throne flanked by two worshiping Luohan, the domed lid pierced and carved in openwork with a band of lotus blooms and scrolling foliage, surmounted by a bud-form finial, the stone a creamy white tone with russet and chestnut veining. Diameter 4 1/2 inches. 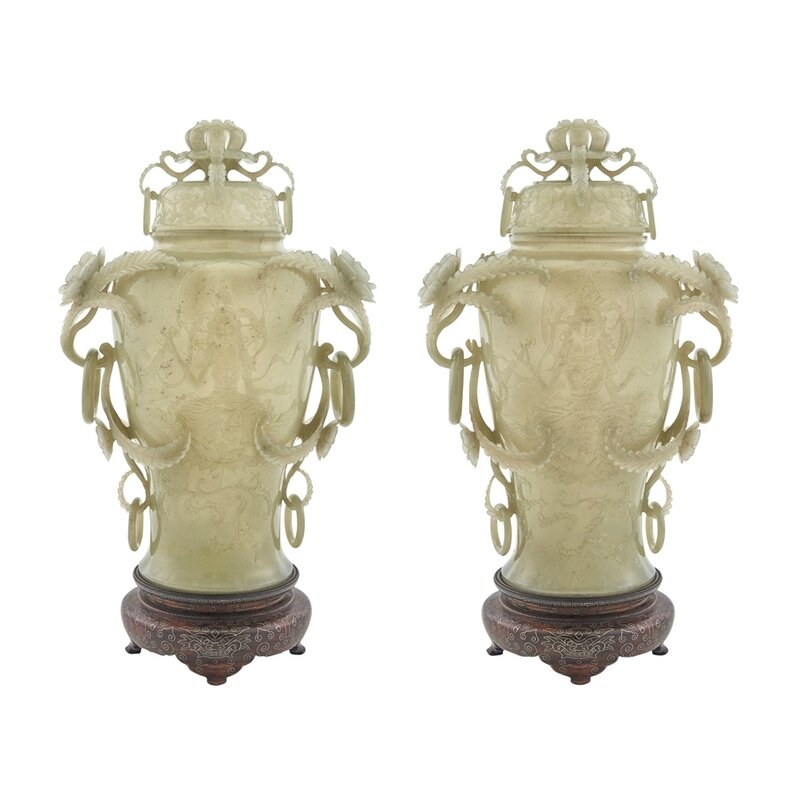 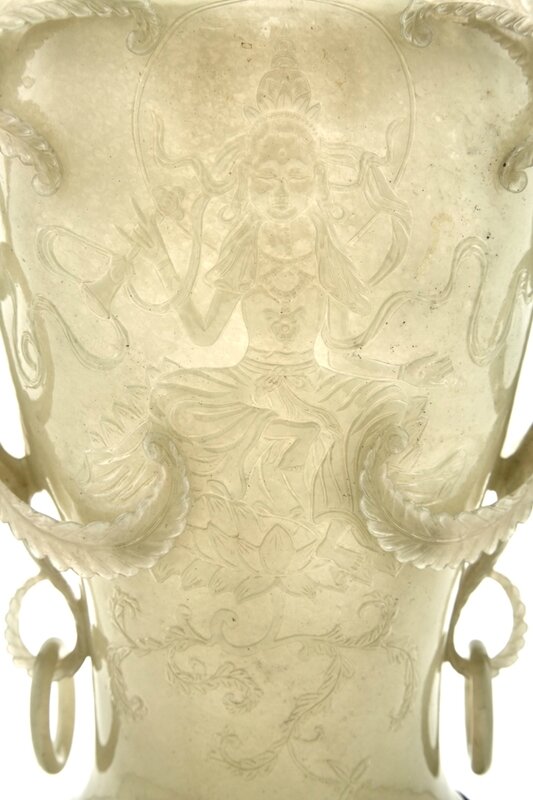 Each high shouldered ovoid form carved in low relief on each side depicting a Bodhisattva seated atop a lotus base, dressed in flowing robes left open at the chest exposing an elaborate beaded necklace and adorned with a long undulating scarf, flanked by two handles carved in openwork with scrolling flowers and stylized leaves suspending two loose rings, the conforming domed lid carved in low relief with a band of Bodhisattvas and surmounted by a bud-form finial issuing leaves forming four handles, two of which suspend loose rings, the semi-translucent stone a grayish celadon tone with gray flecking, fitted wood stand. Height 10 7/8 inches.

Bronzes in the Collection feature an 18th century Sino-Tibetan gilt-bronze figure of Shadakshari Lokeshvara seated in dhyanasana on a lotus base, height 8 inches. Shadakshari-Lokeshvara is the four-armed manifestation of the bodhisattva Avalokiteshvara and is often regarded as the patron deity of Tibet. In this example, the deity’s principal hands are held before the heart in the anjalimudra of respectful salutation, with the two outer hands holding the bhodi bead from a rosary representing enlightenment, and the lotus flower of purity. The bronze has been exhibited at the Minneapolis Institute of Art, Minnesota, under long term loan (est. $15,000-25,000). 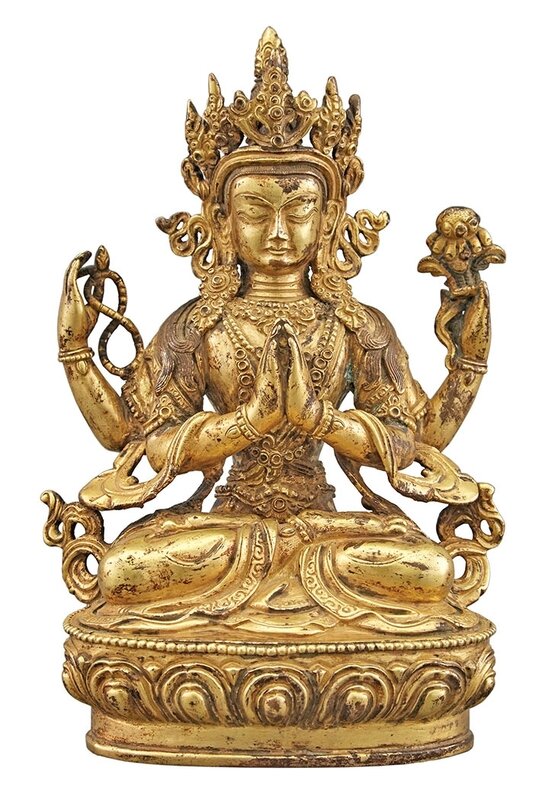 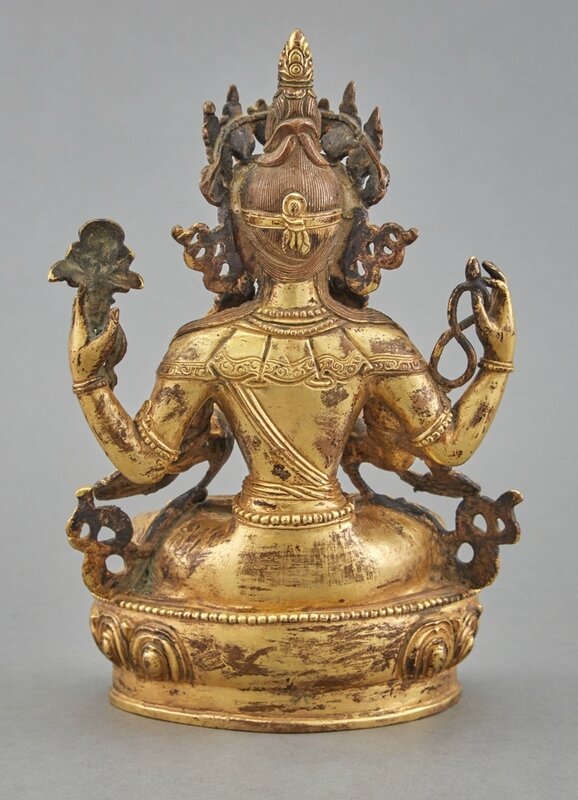 The four-armed bodhisattva seated in dhyanasana on a lotus base, the primary hands in anjali mudra and the secondary hands holding a rosary and lotus flower, clad in a dhoti with incised hems secured with a beaded belt, adorned with anklets, bracelets, necklaces, and disk-shaped earrings, the serene face with heavy lidded eyes beneath a foliate tiara, the hair in a high chignon and secured with a finial. Height 8 inches.

Khmer bronzes offer an 11th/12th century Triad figural group in the Bayon style depicting a Buddha seated in dhyanamudra before the seven-headed canopy of the serpent king, Muchalinda, flanked by standing figures of Avalokitesvara and Prajnaparamita, height 11 3/4 inches (est. $12,000-18,000). 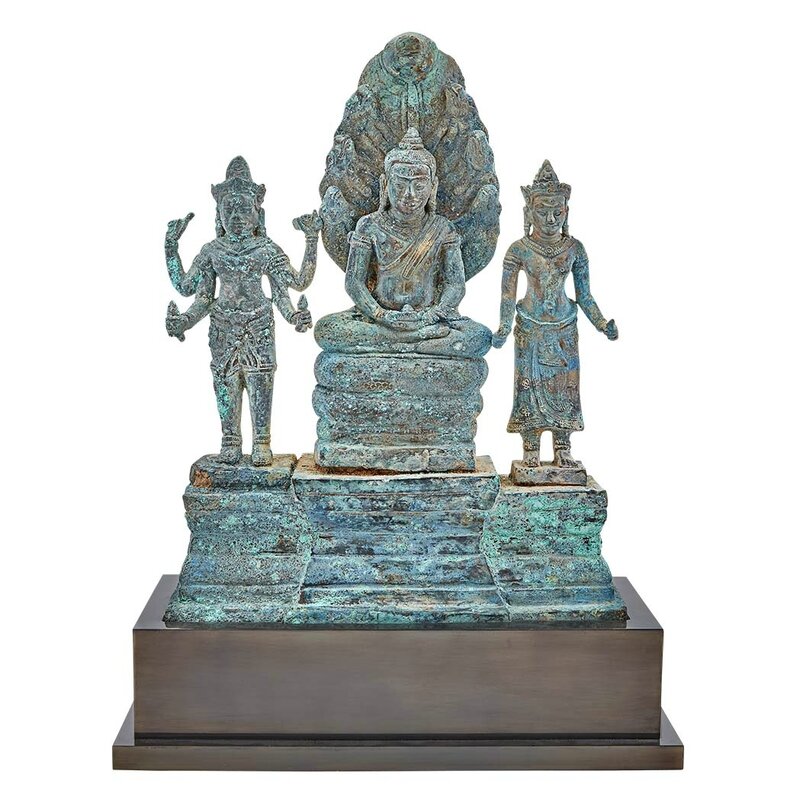 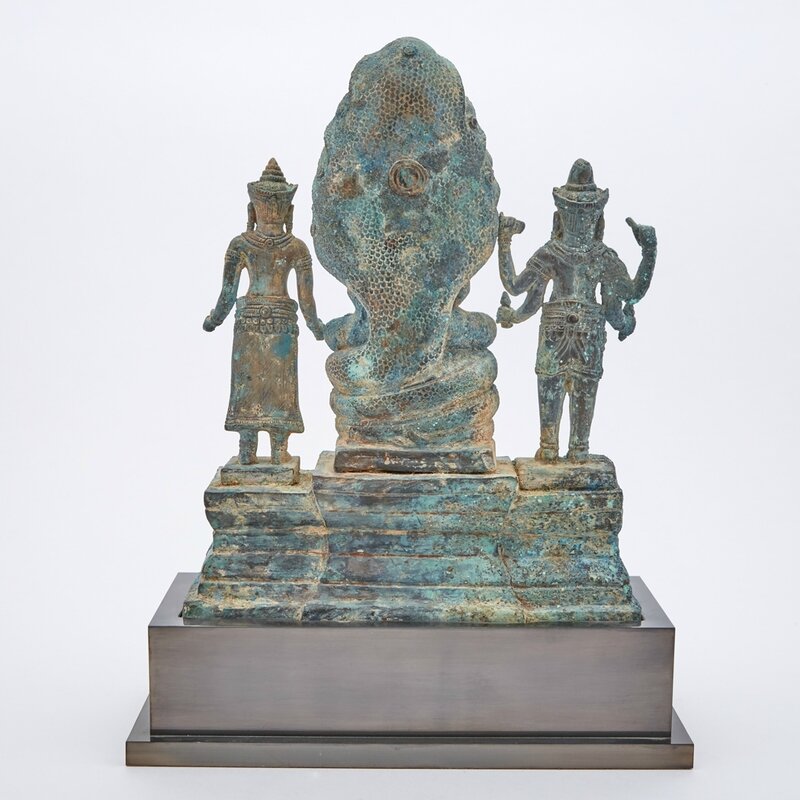 Raised on a stepped base with a central Buddha seated in dhyanamudra with the hands held in his lap, before the seven-headed canopy of the serpent king, Muchalinda, wearing a short loincloth and adorned with elaborate jewelry, his face with serene expression and downcast eyes beneath hair pulled back into a topknot, flanked by the four-armed standing Avalokitesvara to his right and by a standing figure of Prajnaparamita on the left. Height 11 3/4 inches.

Among the Chinese paintings in the sale are a 1959 painting titled New Moon over Hong Kong by Chen Qikuan (1921-2007) (est. $30,000-50,000) and two works by Qi Baishi (1864-1957). For Qi Baishi (1864-1957), the morning glory was a favorite subject and source of artistic inspiration. In one painting, he depicts a cluster of morning glories in full bloom with their buds, tendrils and leaves entwined along a stretch of bamboo fence. The morning glories are portrayed in an especially unconstrained and spontaneous manner, reflective of his later work (est. $20,000-30,000).

For Qi Baishi, the morning glory was a favorite subject and source of artistic inspiration. In this painting, the artist depicts a cluster of morning glories in full bloom with their buds, tendrils, and leaves entwined along a stretch of bamboo fence. In this late work, the morning glories are portrayed in an especially unconstrained and spontaneous manner

The sale offers approximately fifty Chinese snuff bottles from two private collections. Highlights include a crystal snuff bottle, 1850-1900, inside painted by Wang Xisan, 1968, with a scene of small huts nestled along a riverbank, height 2 3/4 inches (est. $5,000-7,000). Another inside painted glass snuff bottle, 19th century, depicts a scholar and his assistant, Gui Xianguu, standing near a lake in a landscape and the reverse with calligraphy, height 2 1/2 inches (est. $5,000-7,000). The rounded rectangular form set on a low oval foot, painted with a continuous scene of small huts nestled along a riverbank before a lush green mountainous landscape. Height 2 3/4 inches. The rounded rectangular form raised on a slightly splayed foot, painted on one side with a scholar and his assistant, Gui Xianguu, standing near a lake in a landscape, the reverse with calligraphy. Height 2 1/2 inches.

Other sale highlights include a Chinese aloeswood 'Chenxiangmu' brushpot from the Qing Dynasty carved with a continuous scene of scholars in various pursuits surrounded by craggy rockwork, plantain and potted vessels, height 6 3/8 inches (est. $30,000-50,000). Of irregular cylindrical form, the sides carved in various levels of relief with a continuous scene of sixteen scholars in various pursuits, some engaged in discussions, others playing weiqi and a group drawing sap from a wutong tree, surrounded by craggy rockwork, plantain and potted vessels, the wood of a rich warm brown tone. Height 6 3/8 inches.

The public is invited to the exhibition on view from Friday, September 8 through Sunday, September 10. Doyle is located at 175 East 87th Street in Manhattan.