A very rare small clair-de-lune-glazed saucer dish, Yongzheng mark and of the period (1723-1735)

A very rare small clair-de-lune-glazed saucer dish, Yongzheng mark and of the period (1723-1735) The dish has rounded sides rising from a low foot ring to a gently flaring rim, and the interior and exterior are covered with a translucent pale lavender-blue glaze stopping neatly around the foot.

Note: A pair of very similar dishes, also bearing Yongzheng marks within double squares, is illustrated by P. Y, K. Lam, Shimmering Colours: Monochromes of the Yuan to Qing Periods, The Zhuyuetang Collection, Hong Kong, 2005, p. 140, no. 72, and another pair, described as having a ‘pale cobalt-blue glaze’, in the Percival David Foundation of Chinese Art is included in the Illustrated Catalogue of Ming and Ch'ing Monochrome, London, 1973, Section 6, nos. B560 and 561. Another dish in the Nanjing Museum is illustrated in Qing Imperial Porcelain of the Kangxi, Yongzheng and Qianlong Reigns, Hong Kong, 1995, no. 40. 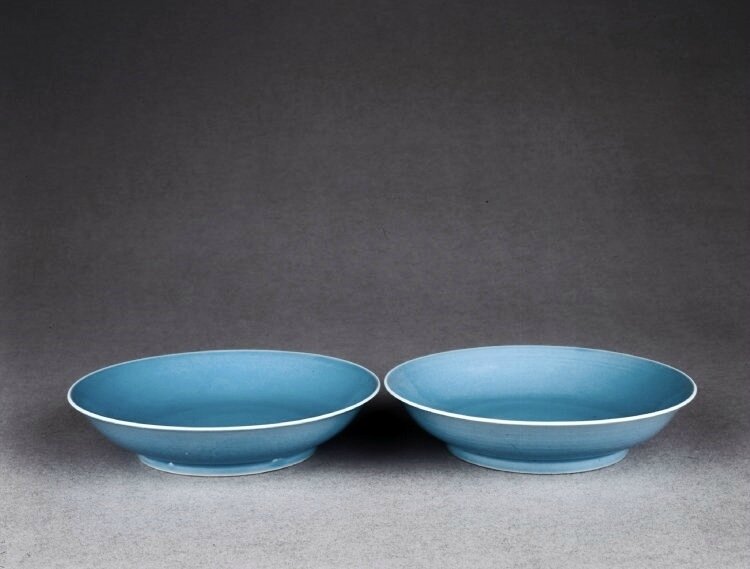 The beautiful, clear bluish glaze of the present dish is inspired by the almost legendary Ru glaze of the Song dynasty. Traditionally much admired by Chinese connoisseurs, the Ru glaze was copied on porcelain as early as the 15th century. Excavations at the imperial kilns at Jingdezhen have revealed that Ru-type glazes were being made for the Ming imperial court. In 1984 a porcelain bowl with inverted rim and Ru-type glaze was excavated from the Xuande stratum at the imperial kilns, and is illustrated in Imperial Porcelain of the Yongle and Xuande Periods Excavated from the Site of the Ming Imperial Factory at Jingdezhen, Urban Council Hong Kong, 1989, pp. 276-7, no. 97. The imitation of this revered glaze became even more popular at court in the 18th century under the Yongzheng and Qianlong Emperors.

The Yongzheng emperor appears to have had particular admiration of these Ru wares and a number of vessels from his reign were made with fine Ru-style glazes. It is possible that the copy of Song dynasty Ru ware glazes made for the Yongzheng emperor was devised by the greatest of all the supervisors of the imperial kilns, Tang Ying, who first came to the kilns as resident assistant in 1728. Tang Ying was especially known for his highly successful imitation of early wares. Indeed, the Jingdezhen tao lu notes that, "His close copies of famous wares of the past were without exception worthy partners (of the originals); and his copies of every kind of well-known glaze were without exception cleverly matched ..." (translated by R. Kerr in Chinese Ceramics - Porcelain of the Qing Dynasty 1644-1911, London, 1986, p. 20).