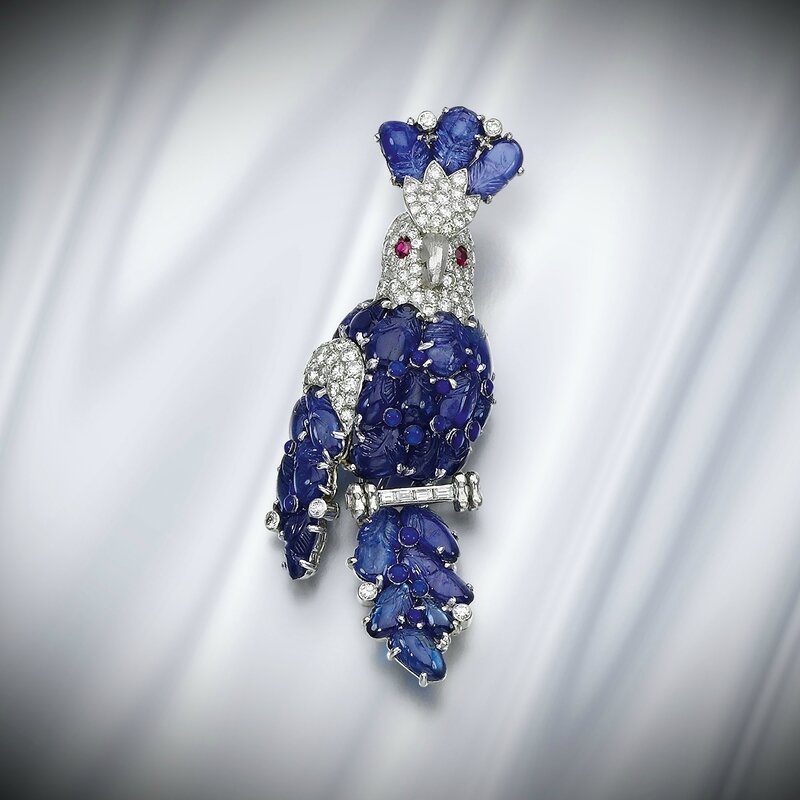 The carved sapphires incorporated into this cockatoo brooch recall Cartier’s seminal ‘Tutti Frutti’ designs. The carved stones that defined the ‘Tutti Frutti’ designs were acquired by Jacques Cartier over a series of trips to India, starting in 1911, where he was awarded commissions from figures such as the Maharajas of Patiala and Kapurthala to remount their jewellery collections in the contemporary Parisian style (Nd p.233). The carved stones that Cartier found in these jewels soon found their way into his firm’s designs, aimed at a western audience. Interpreted and arranged as leaves and fruit, they would often be incorporated into bracelets of meandering vines and clustered into giardinetto brooches.

These jewels embodied the exoticism that flavoured much of Cartier’s output throughout the 1920s, owing much to the work of Charles Jacqueau (1885 – 1968). A designer of inexhaustible curiosity, Jacqueau’s imaginative designs effortlessly incorporated a variety of diverse influences from sources such as Mughal, Chinese and Egyptian art, as well as the contemporary Ballets Russes, into a rich visual vocabulary that lent itself to a vast array of jewels and objects.

The changing fashions of the following decades saw Cartier gradually move away from the Mughal inspiration behind the ‘Tutti Frutti’ jewels and the geometric abstraction of Art Deco, and increasingly towards more figurative designs. Fuelling this shift in aesthetic was Cartier’s designer Peter Lemarchand (1906-70). Throughout the 1940s he created a menagerie of jewelled creatures, including the famed ‘big cat’ jewels, songbirds, chimeras and parrots. Fascinated by animals, he is said to have spent hours at the zoo in Vincennes, which informed his lavish and endearing creations. A welcome antidote to the harsh realities of the era, his birds in particular held a deeper meaning. Freed from their cages and soaring in the sky, full of colour and movement, they symbolised the liberation of France from its oppression by German forces during the war.

The same carved motif on the sapphires that Jacqueau had mostly employed as leaves and fruits in the ‘Tutti Frutti’ jewels of the mid 1920s was reimagined by Lemarchand as feathers by the late 1940s. In this slightly later brooch, dating from the late 1950s, these carved sapphires represent the vivid blue plumage of a cockatoo, enhanced by roundels of blue enamel. The present brooch is therefore a self-referential fusion of designs across both these eras, playfully repurposing an earlier motif and applying it to a later design.

Two comparable brooches from Cartier Paris, depicting a kingfisher and a cockerel and dated 1956 and 1958 respectively, are illustrated in Franco Cologni and Eric Nussbaum, Platinum by Cartier, Triumphs of the Jeweler’s Art, Harry N. Abrahams Inc., France, 1996, pg. 194 and 196.