finely potted, the rounded sides rising from a slightly tapered foot, decorated in the center with five iron-red bats fluttering around a gnarled peach tree, issuing from the side of a cliff above a green sea with crested waves breaking over jagged rocks, the exterior with four fruiting sprigs each enclosing a stylized shou character within a flowerhead, alternating with pairs of confronted iron-red bats, the base with a six-character reign mark in underglaze blue within double circles

Note: The scene depicted on this dish represents the seventh trial of Zhao Sheng, a disciple of the Eastern Han dynasty Celestial Master Zhang Daoling (AD 134-156) who is credited with founding the Way of the Celestial Masters sect of Daoism. This theme of testing the faith of Zhao Sheng is also captured in the famous Eastern Jin painter Gu Kaizhi’s ‘Account of Painting the Cloud Terrace Mountain’, preserved in Zhang Yanyuan’s Record of Famous Paintings of All the Dynasties (AD 847). Zhang Daoling told his disciples that he would reveal the essence of the Way to those who could obtain peaches from a peach tree growing sideways from a steep cliff. Only Zhao Sheng had the courage to carry out the task and he returned with a peach from the tree. While the rendition of this story on the present dish excludes the figures and how they should be depicted in Gu Kaizhi’s instructions, it retains his description of a lofty cliff overlooking a deep ravine and the peach tree that grows sideways from it. The additional inclusion of the five red bats heightens the auspiciousness of the scene while increasing the supernatural element of the story.

A closely related dish, in the Victoria and Albert Museum, London, is illustrated in Rose Kerr, Porcelain of the Qing Dynasty 1644-1911, London, 1986, pl. 86; one from the Hugh Moss collection first sold at Christie’s New York, 15th September 2011, lot 1548, and again in our Hong Kong rooms, 7th April 2015, lot 3667; another sold in the same rooms 4th April 2012, lot 3181; and a pair of dishes from the E.T. Chow collection, also sold in those rooms, 19th May 1981, lot 557. Another dish of this type is illustrated in Terese Tse Bartholomew, Hidden Meanings in Chinese Art, San Francisco, 2006, p. 221, no. 7.55, where the author explains that the iconography refers to the double birthday greetings, ‘May your blessing be as deep as the Eastern Sea, and may you live to be as old as the Southern Mountain’. 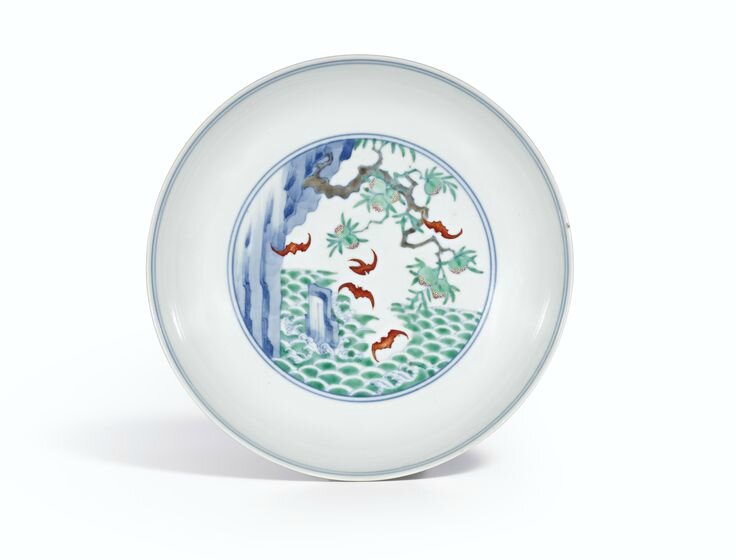