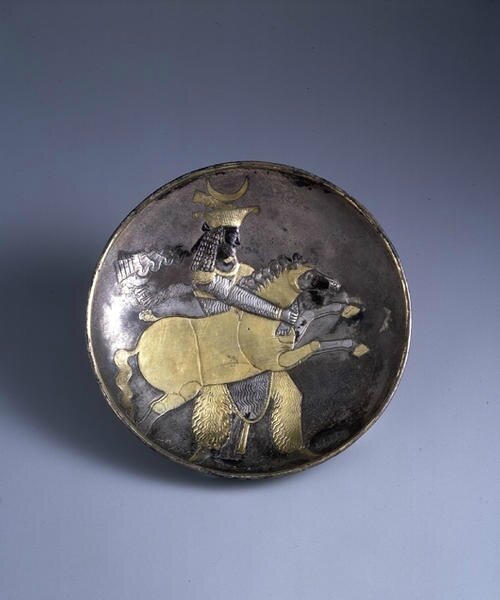 In the center of this large, imposing silver plate, there is a large figure of a man holding a mare, which nearly fills the plate. The crown on his head is ornamented with fluttering ribbons and a crescent. The man has wavy hair. The patterns on this plate are typical of Sasanian silver design, including the fluttering ribbons, the bead ornaments for the ear, the beard tied at the end, the rounded shoulder pad, the necktie with gobang pattern, the strip of decoration from the shoulder to the chest, fluttering thin pantaloons or leggings, and shoes decorated with ribbons. Judging from evidence such as the sheath of a sword which can be seen between the legs of the figure, and the shape of the crown, which is different from the shape of the crowns of kings found on Sasanian coins, it is thought that this figure represents a prince or an emir, rather than a king of Kings.

The representation of the mare's joints and the muscles of the legs are typical of the period, but some points, including the untrimmed mane, loose, disheveled tail, and bare back are unusual, and cannot be seen in other examples from the time.

The piece is thought to depict a scene in which a prince or an emir modeled in the image of a legendary hero is holding a mare. The scene is very different from scenes of royal hunting shown on many Sasanian silver plates. Iranian mythology and legends are said to have been compiled from around the Sasanian dynasty, but now are mostly lost. However, some stories may be found in the Iranian national epic "Shahnameh," mentioned sometime in the 10th century when the racial consciousness was high in the Islamic period, and from some other sources. Among these stories, there is a story of an important national hero Rostam and his future favorite horse Rakhsh.–1 This kind of silver plate might have been produced in the Sasanian period with the theme most probably taken from old legends of this kind.

Rather thick fragments have been inlaid on the figure's upper right arm and below the elbow and also on the mare's head.–2 This method seems comparable to work from the early part of the Sasanian period. The style of the fluttering ribbons, and of the leggings with vertical lines and a soft appearance, is similar to the style found on a large plate, almost the same size as this one, with a royal hunting scene, from Sari, Northern Iran, attributed to the 4th century. However, this plate is thought to have derived from Kushano-Sasanian, Eastern Iran.–3