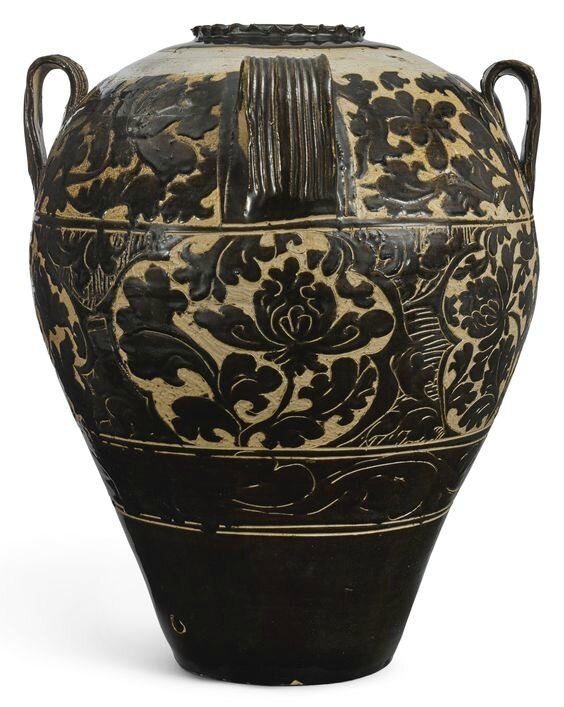 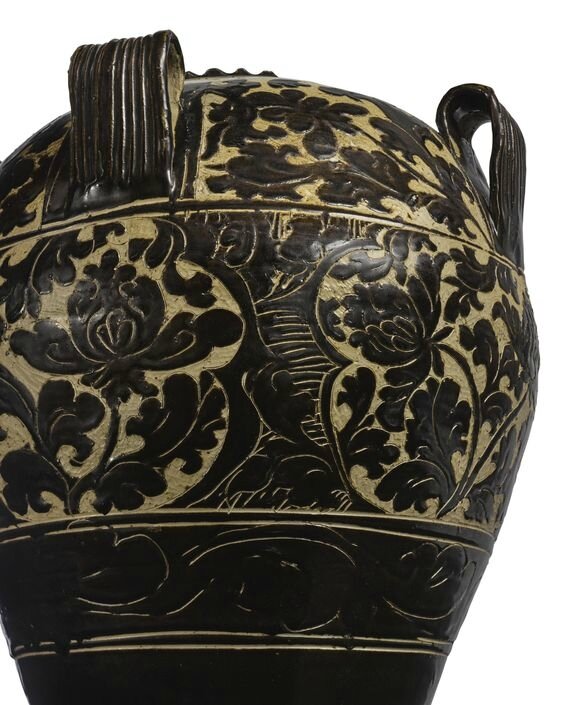 of tapered ovoid form rising to a broad shoulder applied with four strap-handles, the body deftly cut through the brown glaze with two main registers of decoration, the lower band with four large peony sprays within shaped cartouches reserved on a ground of leaves and scored lines, the upper band with four large peony blooms interspersed between the handles, all within double bowstring borders and below wide plain clear and brown-glazed borders at the shoulder, the interior and lower body also glazed brown, the unglazed base with a shallow countersunk medallion incised with a cross, the lower body pierced by a bung hole.

Note: This magnificent jar belongs to a rare group of wares from the Xixia (also known as Tangut or Western Xia) dynasty in the northwest of China, which coexisted with the Song, Liao and Jin dynasties who all produced their own wares. The discovery of the Lingwu kiln was initiated by the lack of records from this kingdom, which was destroyed in 1227 and remained a mystery until relics and literary works in the Xixia language were excavated amongst the ruins of the city of Heicheng in northwest Inner Mongolia Autonomous Region in the early 20th century.

The Lingwu kiln was located at Ciyaobao of Lingwu country, Ningxia, which lies 50 kilometres south of the capital of Xixia, Yinchuan, and was one of the major sites of ceramic production under the Xixia. From 1984 to 1986, the kiln site was excavated resulting in the discovery of shards and kiln implements piled up four meters deep that covered an area of 200,000 square meters. A comprehensive report was published by the Institute of Archaeology of the Chinese Academy of Social Sciences, Beijing, in 1995, Ningxia Lingwu yao fajue baogao, which published shards of vessels decorated with the same technique as the present discovered at the site. Furthermore, incised marks, similar to that on the present jar, have been found on the base of bowl shards excavated at Lingwu, and several jars of related form with four ridged handles and wide unglazed bands at the shoulder appear on many excavated vessels.

Wares of this carved type were produced by glazing the entire yellowish body and then marking out the central and background parts. Within the central area, three techniques of glaze removal were employed: champlevé in the scraping off the glaze to make the outline of the peonies; incising for the petals and leaves; and sgraffiato in the removal of thicker carved lines. For the background, only oblique lines were used to accentuate the delicacy of the peony. The clay consisted of little sand to result in hard and compact bodies that turned pale yellow after firing, while the black glaze was composed of a type of local black slip with iron oxide as the coloring agent. It was fired in an oxidizing kiln at a temperature of approximately 1260°C to result in an aesthetically pleasing contrast between the glazed and exposed body, as well as a textural contrast between the glossy glaze and matte unglazed body. These techniques show that Xixia ceramic production was strongly influenced by Cizhou and Ding wares.

Further examples of Xixia jars decorated with similar cut-glaze techniques include one in the Meiyintang Collection, illustrated in Regina Krahl, Chinese Ceramics from the Meiyintang Collection, vol. 1, London, 1994, pls 454 and 455. See also a white ‘cut-glaze’ meiping with leafy peony design, from the collection of Ruth and Bruce Dayton and now in the Minneapolis Institute of Art, Minneapolis, acc. no. 2001.8. Of the related examples, it is interesting to note not only the similarities but also the subtle differences in the gestural quality of the carving, the proportions of the blossoms and scrolling of the leaves which highlight the individual effort in their making.

This tall, slender, mei ping shape vase displays an exceptionally well-cut floral design. The vessel was first covered with a white slip through which the decoration was incised. The areas intended as background were then shaved away to reveal the light-grey stoneware body of the vase. Finally, the entire vessel was given a transparent glaze before firing. This so-called "cut-glaze" (tia hua) technique had been used at Cizhou type kilns throughout north China since the Jin dynasty (1115-1234).

Recently excavated kilns near Lingwu in northern Ningxia, Huici autonomous region, reveal that the area produced excellent wares during the twelfth and thirteenth centuries of the Xixia period (1032-1227). The black and white "cut-glaze" wares of these kilns included a large variety of bottle-vase forms. Black glazes predominated, however, and white glaze vessels of this size, condition, and design quality are relatively rare.