Minneapolis— The Minneapolis Institute of Art (Mia) presents the first-ever exhibition to focus on view paintings as depictions of contemporary events. “Eyewitness Views: Making History in Eighteenth-Century Europe” features approximately 40 paintings from the golden age of European view painting. Commissioned by rulers, princes, and ambassadors, master view painters such as Antonio Canaletto, Giovanni Paolo Panini, Bernardo Bellotto, and Francesco Guardi recorded memorable events, ranging from the spectacular Venetian carnival to an eruption of Vesuvius; in the process, they produced some of their most significant works. Many of the themes and events depicted—including the introduction of political leaders into office, natural disasters, and major sporting events—have parallels today, and the emotions they evoke remain the same. On view September 10 through December 31, 2017, “Eyewitness Views: Making History in Eighteenth Century Europe” is co-organized by J. Paul Getty Museum, Minneapolis Institute of Art, and Cleveland Museum of Art.

“’Eyewitness Views’ offers a captivating view of why and how Venice, Rome, and other European centers of power and grandeur made history,” said Patrick Noon, Elizabeth MacMillan Chair of Paintings at Mia. “With this exhibition, visitors can encounter bygone worlds of gaudy refinement and imposing spectacle as mediated by many of Italy’s most celebrated painters of the eighteenth century.”

Featured paintings depict many of Europe’s most recognizable cities, including Venice, Rome, Naples, Paris, Warsaw, and Madrid. Vividly detailed and gorgeously painted, these grand canvases transport viewers to sites—such as Saint Peter’s Basilica in Rome or onto a gondola floating along the Grand Canal in Venice during a regatta—where they could experience what it was like to be a witness to history.

Unique to Mia’s installation, Thomson Reuters has provided Reuters photos of iconic events to be incorporated into the display to connect visitors to the themes of the exhibition and contemporary life. “Eyewitness Views” is organized according to four thematic sections:

Memory and Manipulation: Explores whether view painters were faithful chroniclers, capturing events just as witnessed, or if they manipulated reality to meet the expectations of the status-conscious clientele.

Highlights: Michele Marieschi’s Doge Pietro Grimani Carried into Piazza San Marco after his Election (about 1741); Francesco Battaglioli’s King Ferdinand VI and Queen Barbara of Braganza in the Gardens at Aranjuez on the Feast of Saint Ferdinand (1756). Civic and Religious Ritual: Examines some of Europe’s historic events, religious feast days, and public rituals. Whether sacred or secular, these occasions were filled with civic pride. Festival and Spectacle: Showcases the no-expense-spared pageantry and entertainment in Venice and Rome in the 1700s, including the ceremonial regatta and celebrations of royal births and marriages.

Highlights: Giovanni Paolo Panini’s The Musical Performance in the Teatro Argentina in Honor of the Marriage of the Dauphin (1747); Luca Carlevarijs’ Regatta on the Grand Canal in Honor of Frederick IV, King of Denmark (1711). Disaster and Destruction: Presents scenes of devastation caused by warfare, fire, natural disaster, and political turmoil. This grouping stands apart by downplaying the presence of rulers and nobility in favor of the lower classes.

Highlights: Pierre-Jacques Volaire’s The Eruption of Vesuvius (1771); Hubert Robert’s The Fire at the Opera House of the Palais-Royal (about 1781). 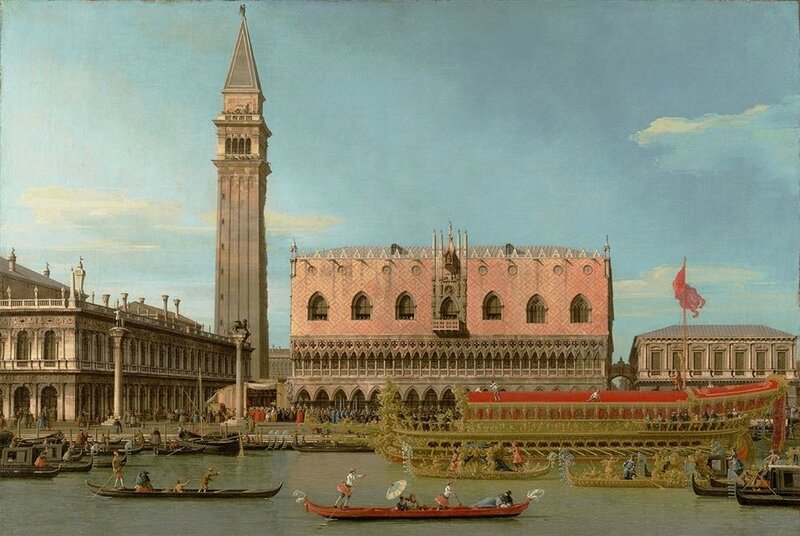 Giovanni Antonio Canaletto (Italian, 1697-1768), The Bucintoro at the Molo on Ascension Day, about 1745. Oil on canvas. Philadelphia Museum of Art: The William L. Elkins Collection, 1924. 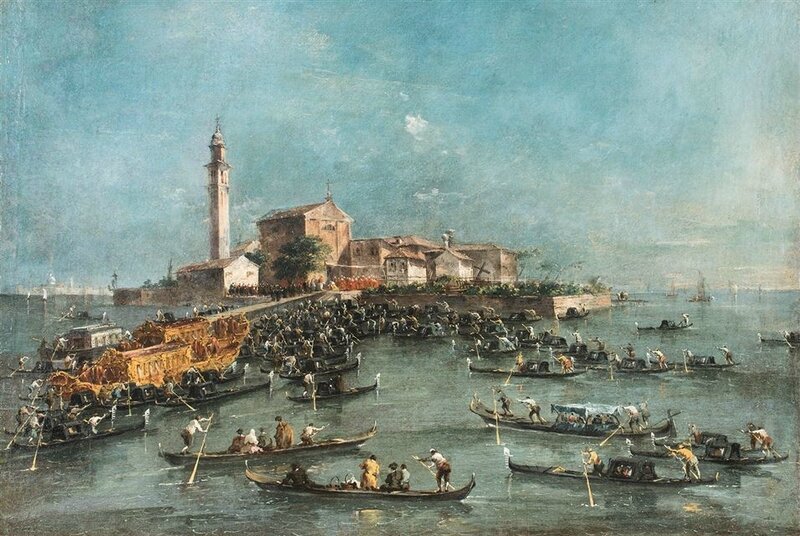