A rare and magnificent blue and white ewer, Yongzheng seal mark and period (1723-1735)

A rare and magnificent blue and white ewer, Yongzheng seal mark and period (1723-1735) 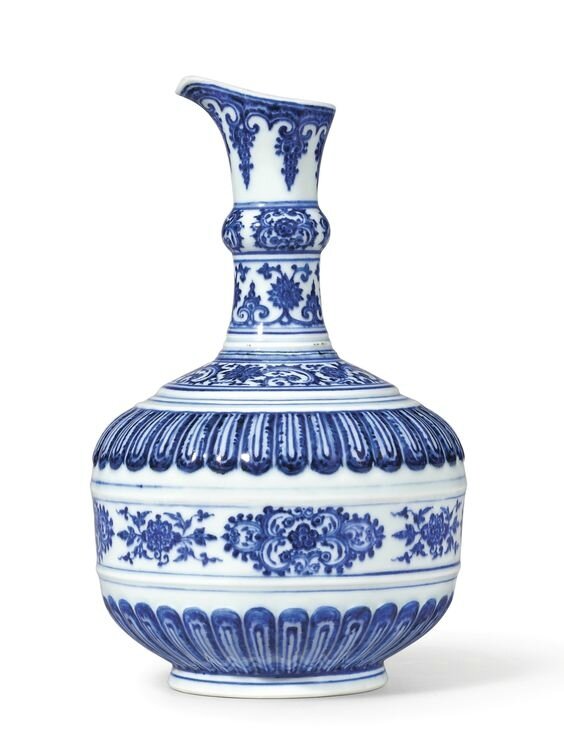 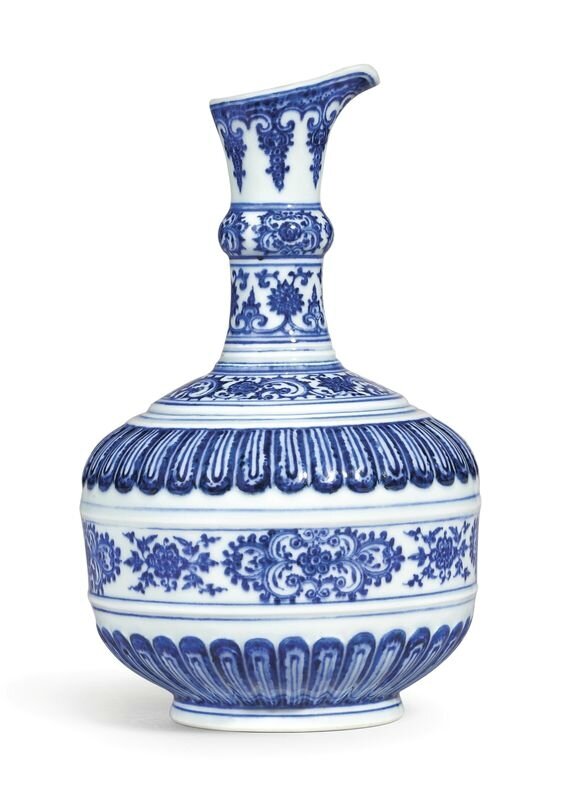 inspired by a metalwork prototype, elegantly potted with a broad cylindrical body molded with two ribbed fillets between two registers of molded chrysanthemum petals, rising to a rounded shoulder and waisted neck with a bulbous mid-section and flaring gently to a broad spout, finely painted in an early Ming style with simulated 'heaping and piling' with detached foliate panels and sprays encircling the body, the neck with bands of varying stylized florets, the rim with floral tassels suspending from ruyi heads, the base with a six-character seal mark in underglaze blue.

Note: This exceptionally rare and elegant ewer represents the height of early Qing porcelain production at the imperial kilns at Jingdezhen in Jiangxi province. Made during the reign of the Yongzheng emperor, it illustrates the emperor’s pursuit of innovative designs and forms as well as the replication of historical masterpieces as a reminder of the nation’s glorious past. Such developments were realized through the exceptional talent and creativity of potters working under the instruction of Tang Ying (1682-1756), the most accomplished superintendent at Jingdezhen during the early Qing period.

The distinctive form of this ewer is likely derived from European or Middle Eastern metalwork, although the model on which is was based is still to be identified. Whilst its intended purpose is also unknown, this form is known as huajiao or flower watering jug, although the shape is equally well suited to pouring wine. The form clearly found favor with the Yongzheng emperor, as a range of examples, both with and without handles, can be found in blue and white as well as with monochrome glazes.

Compare a closely related ewer of the same form and design in the Palace Museum, Beijing, illustrated in Gugong Bowuyuan cang. Qing dai yuyao ciqi [Porcelains from the Qing dynasty imperial kilns in the Palace Museum collection], vol. II, Beijing, 2005, pl. 44 (fig. 1); and two closely related handled ewers, also in the Beijing Palace Museum, the first with scattered floral sprays encircling the bulbous middle section of the neck, illustrated in The Complete Collection of Treasures of the Palace Museum. Blue and White Porcelain with Underglaze Red, vol. 3, Hong Kong, 2000, pl. 109; the other with a floret scroll band at the neck, illustrated in Gugong Bowuyuan cang. op. cit., pl. 43. Further related examples include one sold in our Hong Kong rooms, 26th October 1993, lot 169 and illustrated in Imperial Perfection. The Palace Porcelain of Three Chinese Emperors. A Selection from the Wang Xing Lou Collection, Hong Kong, 2004, pl. 8, and another, formerly in an English private collection, sold at Christie's London, 7th November 2006, lot 196. For examples applied with a white glaze, see one formerly in the collections of Sir Harry Garner and Edward T. Chow, illustrated in Regina Krahl, Chinese Ceramics from the Meiyintang Collection, vol. II, London, 1994, pl. 794, and another in the Grandidier Collection in the Musée Guimet in Paris, illustrated in Oriental Ceramics. The World's Greatest Collections. Musée Guimet, vol. 7, Tokyo, 1982, pl. 170; and a third in the Palace Museum illustrated in Gugong Bowuyuan cang. op. cit. pl. 90. 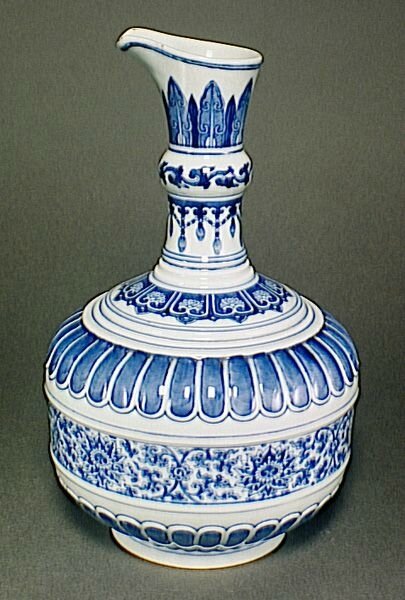 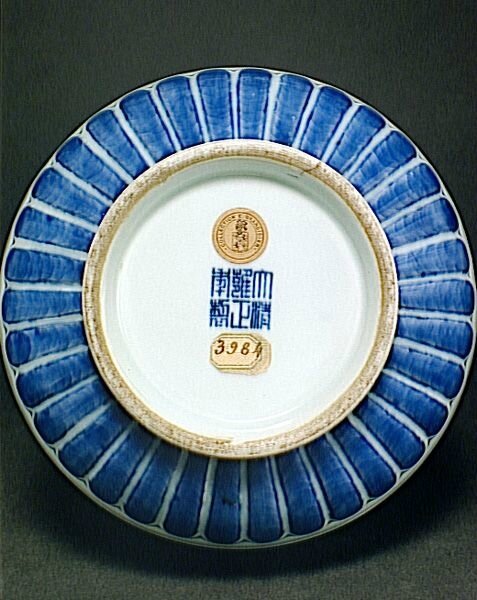 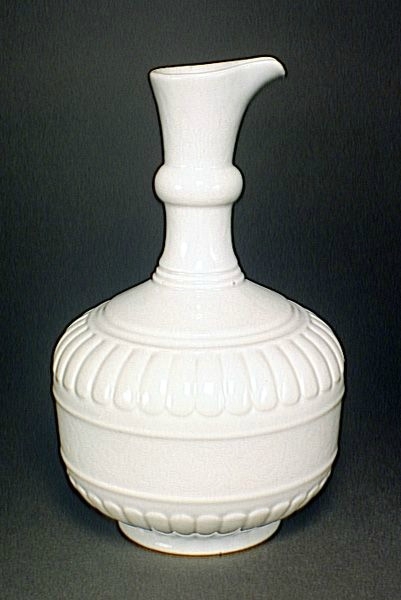 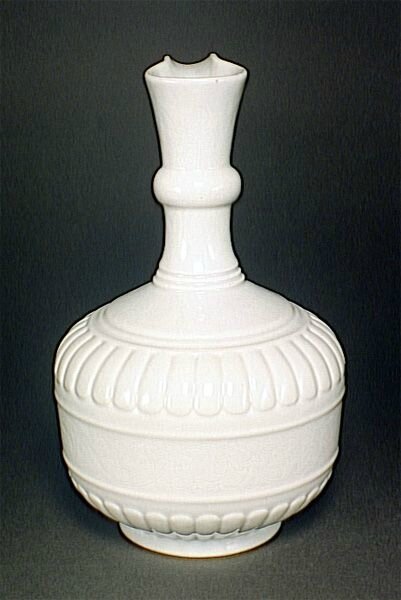 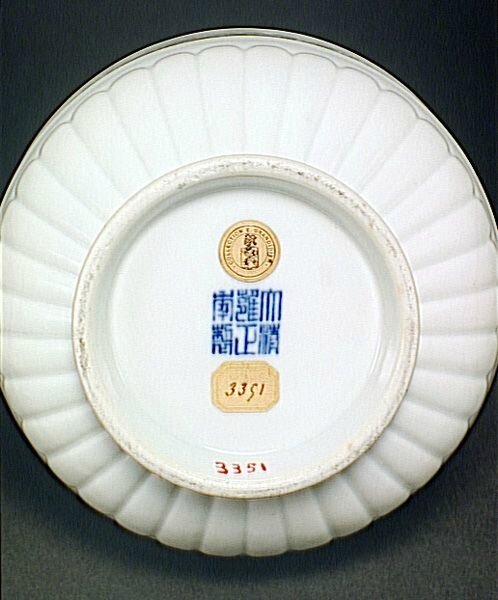 A handled example applied with a flambé glaze, also in the Qing court collection, is illustrated in op. cit, pl. 143; another was sold in our Hong Kong rooms, 21st March 1979, lot 101. A ewer of this form but applied with a teadust glaze is illustrated in The Complete Collection of Treasures of the Palace Museum. Monochrome Porcelain, Hong Kong, 1999, pl. 244. A number of incised celadon-glazed ewers of similar form have been sold at auction, including one with a handle, sold in our Hong Kong rooms, 20th May 1980, lot 80; and one without a handle, sold in these rooms, 15th June 1983, lot 316, and later at Christie's Hong Kong, 28th November 2005, lot 1312. 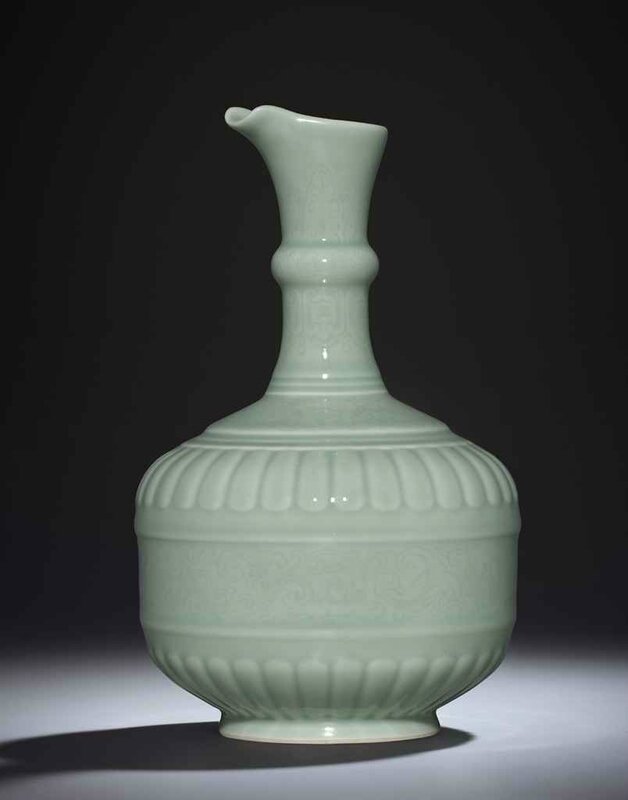 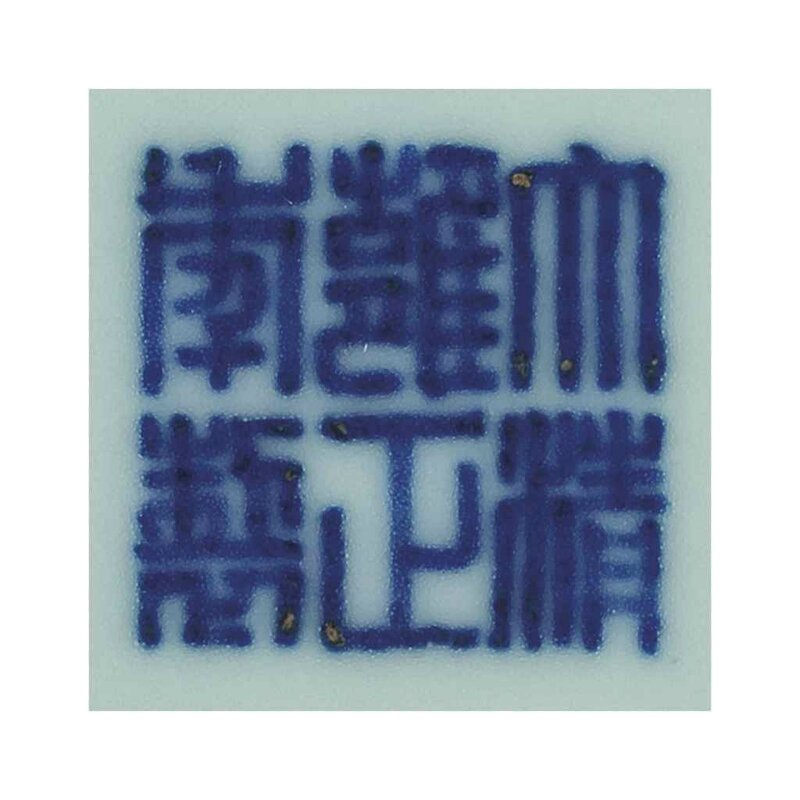 Inspired by Near Eastern metalwork, the ewer is incised with a central floral scroll flanked by raised lines and moulded bands of petals at the shoulder and above the low splayed foot, the base of the slender neck with a further floral scroll between concentric bands, and the neck moulded with a central horizontal flange incised with stylised flowerheads, dividing pendent tasselled lappets and stiff leaves rising to the curved spout, covered inside and out with a pale celadon glaze thinning slightly at the extremities, Japanese wood box.

Note: The distinctive shape of this ewer is modelled after an early Ming blue and white prototype, which in turn is based on Islamic metalwork, used originally as a hand-cleansing vessel before worship. On early Ming examples, the chased and inlaid decorations on Islamic metal vessels are recreated as painted motifs in underglaze blue, such as a Yongle blue and white handled ewer painted with floral scrolls in the Beijing Palace Museum, illustrated in Blue and White Porcelain with Underglazed Red (I), The Complete Collection of Treasures of the Palace Museum, Hong Kong, 2000, pl. 51. During the Qing dynasty, this was further re-interpreted in the form of blue and white and monochrome-glazed ewers like the present lot, either with or without handles.

Near identical ewers of this rare Islamic-influenced form include one in the Grandidier Collection in the Musee Guimet, Paris, illustrated in Oriental Ceramics, The World's Great Collections, Kodansha Series, vol. 7, pl. 170; one in the Avery Brundage collection in the Asian Art Museum of San Francisco, illustrated by He Li, Chinese Ceramics, A New Comprehensive Survey, San Francisco, 1996, pl. 544; one sold at Christie's London, 3 December 1973, lot 254, and illustrated by A. du Boulay, Christie's Pictorial History of Chinese Ceramics, Oxford, 1984, p. 217, fig. 9; and another from the Fuller Collection, sold at Christie's London, 28 June 1965, lot 98.

Among the most distinctive features of this group of ewers are the bands of molded chrysanthemum petals encircling the lower body and shoulder. Porcelain wares inspired by the multi-layered petals of chrysanthemum flowers were a particular innovation of the Yongzheng period, as evidenced by a number of dishes, bowls and teapots in chrysanthemum form. In her article 'In the Path of Tao Qian: "Chrysanthemum" Wares of the Yongzheng Emperor', Arts of Asia, May-June 2015, pp 72-85, Hajni Elias expands on the symbolic associations of the chrysanthemum flower and the close associations with one of China's most famous poets, Tao Qian (365–427). Retiring from his official position in 405, during the tumultuous Six Dynasties period (222-589), Tao Qian spent a quiet life tending to his chrysanthemums and writing poetry. A painting formerly in the Qing court collection, and therefore likely treasured by the Yongzheng emperor, entitled Scholar of the Eastern Fence, by the early 13th century court artist Liang Kai (circa 1140-1210), shows Tao Qian in a landscape, holding a chrysanthemum flower in his hand. The Yongzheng emperor was a devout Daoist and the imagery of Tao Qian's decision to spend his life contemplating nature, and his direct association with the chrysanthemum flower, would have no doubt resonated with him and may have served as inspiration for commissioning the manufacture of chrysanthemum-form porcelain wares.