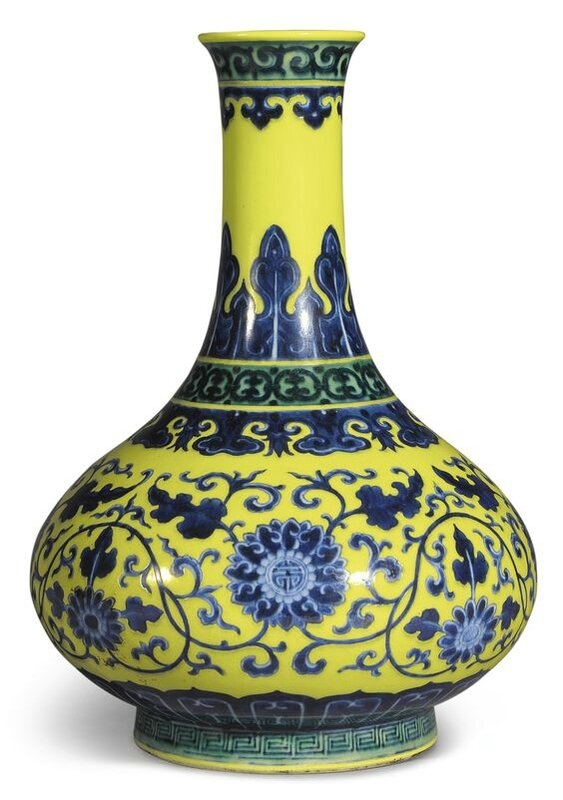 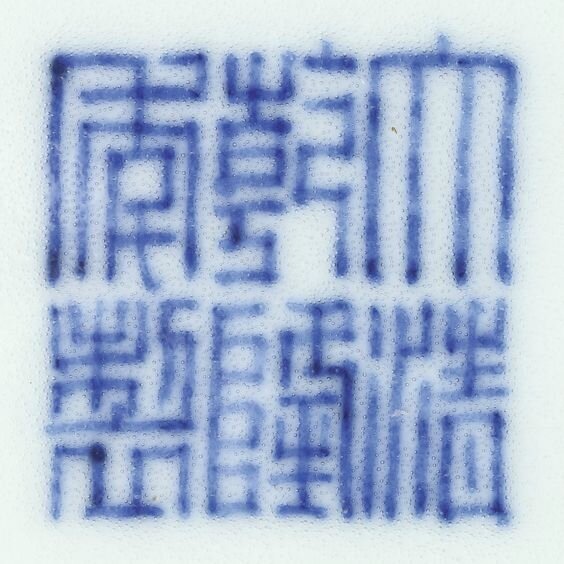 the pear-shaped body with a slightly compressed belly, elegantly rising to a waisted neck and flared mouth, painted in deep underglaze-blue tones with a composite lotus and chrysanthemum scroll around the body, framed by a lappet collar below and ruyi-head and C-scrolls borders at the shoulder, the neck accentuated with upright lappets below further ruyi and classic scroll borders below the rim, the foot encircled by a keyfret band, all reserved on a yellow-enameled ground with three of the borders applied with a green wash, the base with a six-character seal mark in underglaze blue, the enamels later added

Note: Blue and white vases of this type, each with variations of the decorative bands and the Qianlong mark written in kaishuscript, include a slightly smaller example, from the collection of Sir Harry and Lady Garner, included in the Oriental Ceramic Society Loan exhibition of Chinese Blue and White Porcelain, 14th to 19th Centuries, London, 1954, cat. no. 312, sold in our London rooms, 8th-9th July 1974, lot 308, and again in our Hong Kong rooms, 5th October 2011, lot 1922; another sold at Christie's London, 4th November 2008, lot 205. Compare also a smaller vase, but with a slightly broader neck and a Qianlong seal mark on the base, sold in our Hong Kong rooms, 2nd May 1995, lot 72, and again at Christie's Hong Kong, 29th May 2007, lot 1467. 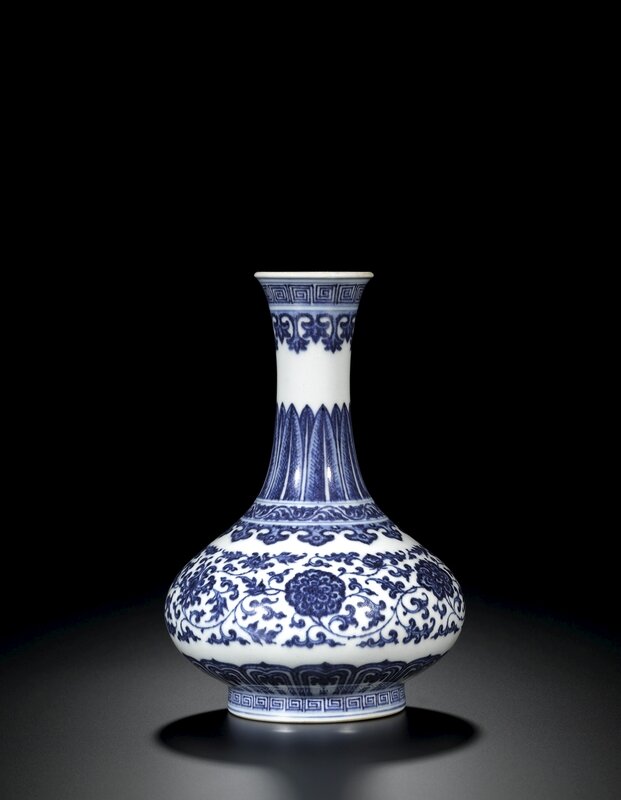 of pear form with a slightly compressed belly, elegantly rising to a waisted neck and flared mouth, decorated around the belly with a continuous frieze of flower blossoms of various types including stylised chrysanthemum and lotus, all borne on a foliate scroll with further florets and buds, between pendant ruyi heads and lappets, the curved neck accentuated with upright plantain leaves below a key-fret band at the mouth, the cobalt of a vivid blue tone with simulated 'heaping and piling' effect, the countersunk base inscribed with a six-character reign kaishu mark in underglaze blue.

Note: A closely related vase was sold at Christie's London, 4th November 2008, lot 205; and a smaller example, but with slightly different proportions and a Qianlong seal mark on the base, was sold in these rooms, 2nd May 1995, lot 72, and again at Christie's Hong Kong, 29th May 2007, lot 1467. Compare also similarly decorated vases with globular bodies and long flaring necks, but of larger size and painted with crashing waves at the mouth, a key-fret band and floral scroll base on the neck, and a classic scroll on the foot, such as one from the Shanghai Museum, illustrated in Zhongguo taoci quanji, vol. 15, Shanghai, 2000, pl. 2; four vases with later metal mounts illustrated in Regina Krahl, Chinese Ceramics in the Topkapi Saray Museum, Istanbul, vol. III, London, 1986, pl. 2564; and another example from the Toguri collection, sold in our London rooms, 9th June 2004, lot 5.

Qianlong reign marks of this type written in kaishu script are rare and follow in the style of Yongzheng six-character reign marks. See a pear shape vase inscribed with a similar Qianlong reign mark and decorated with similar 15th century style bands, sold in our London rooms, 26th June 1973, lot 299, and again in these rooms, 16th May 1989, lot 41, from the British Rail Pension Fund. The body painted with a broad band of composite foliate scrolls above a petal lappet band and key-fret to the foot, the neck with a classic scroll and upright leaves rising from a further band of ruyi to the shoulder, all below hanging pendants and key-fret to the mouth. Painted in deep cobalt-blue tones simulating 'heaping and piling', with lush flowers borne on a continuous foliate scroll above blue-ground lappets, the shoulders with a band of pendent ruyi heads below a further narrow composite floral band, the tall waisted neck with stiff leaves, ruyi and wave borders on the rim, box.