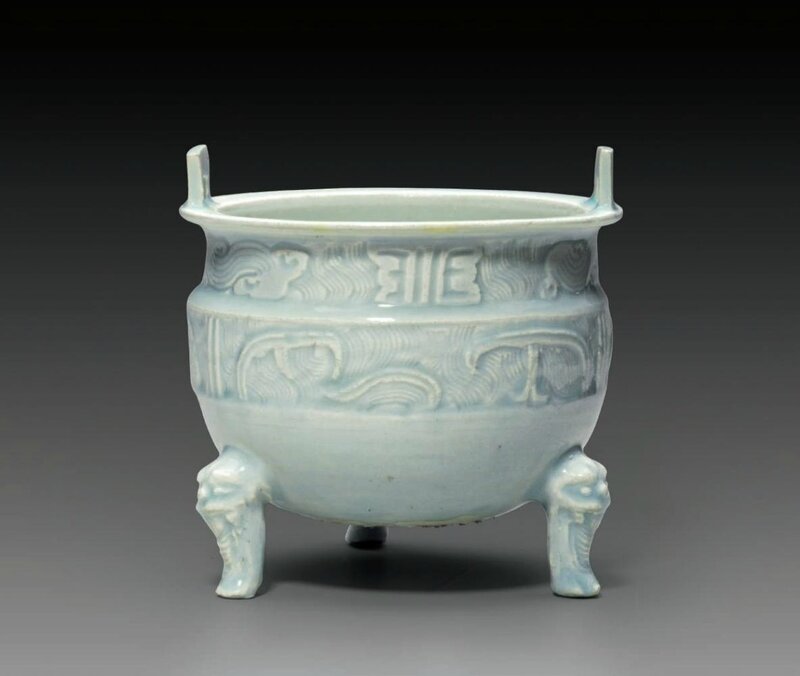 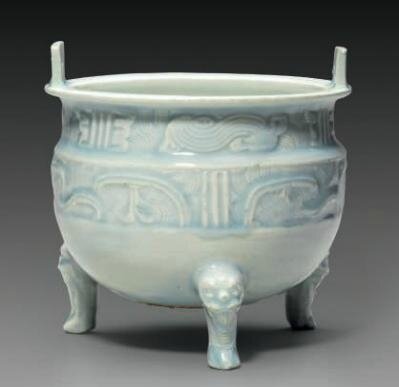 The censer is raised on three ribbed legs surmounted by animal masks, and carved with archaistic motifs reserved on combed bands on the sides and neck below a pair of angular bail handles that rise from the everted rim, and is covered inside and out with a pale blue glaze, except for a circular area in the center of the interior and the base.

Note: A qingbai tripod censer of larger size (17 cm. high) raised on similar tall legs surmounted by animal masks and also with two small rectangular handles, but carved with a floral design, was excavated in 1991 from a Southern Song hoard in Jingyu Village, Suining City, Sichuan province, and is illustrated in China's Jingdezhen Porcelain through the Ages, Beijing, 1998, p. 103. Another qingbai tripod censer carved with the Eight Trigrams, excavated in 1964 at Jingdezhen, is now in the Jingdezhen City Museum Collection, and illustrated, op. cit, p. 108. See, also, the pair of qingbai pear-shaped vases dated to the 13th-14th century with phoenix-head handles which, like the present tripod censer, are carved with rather eccentric interpretations of designs found on archaic bronzes, illustrated by R. Krahl, Chinese Ceramics from the Meiyintang Collection, vol. 1, London, 1994, p. 332, no. 619.