Masterpieces from the Asia Society Museum Collection until 8 july 2018

Masterpieces from the Asia Society Museum Collection until 8 july 2018

Mr. Rockefeller believed that art was an indispensable tool for understanding societies. The Asia Society Museum Collection is distinguished by its high proportion of acclaimed masterpieces that exhibit outstanding workmanship and artistry and represent some of the artistic pinnacles of the cultures that produced them. The Collection has been augmented by high-quality gifts and acquisitions have been added to the Collection since the Rockefellers’ original bequest to Asia Society.

The selections in the exhibition showcase the breadth and depth of creative expression across Asia created by artists and artisans with extraordi nary skill. They are artworks that, in the words of Mr. Rockefeller, can “stir and lift” those who behold them, which he saw as an important means of sharing the talent, imagination, and deep history of the peoples of Asia. Masterpieces from the Asia Society Museum Collection explores the specialized artistry of Asian ceramics, metalwork, and stone carving, and follows the development of Hinduism and Buddhism in Asia through some of the most refined and accomplished examples of the region’s great artistic traditions.

The exhibition is organized into three sections. “For Sustenance in this World and the Next” comprises Chinese, Korean, and Japanese vessels—among the most extraordinary historical examples of Asian craftsmanship—created for holding food and drink in domestic, imperial, and ritual settings. Mr. Rockefeller had to obtain special permission to purchase the important decorative tea leaf jar on view in this section, created by the celebrated seventeenth-century ceramic artist Nonomura Ninsei, that was designated an Important Cultural Property by the Japanese government. A you is generally a container with a lid and handle. This you’s tall shape and the band of circles enclosing the main register derive from art of the earlier Shang period. A three-character inscription is cast into the vessel’s cover, two of which are inside a symbol known as a yaxing. Traditional mask-like taotie motifs, set against a background of thunder-clouds, decorate the cover and two registers on the body of this vessel, which was used for storing or serving wine. It remains unclear whether taotie designs have an iconographic or symbolic function or if they simply evolved from bronze-making techniques. This large, impressive flask is decorated with a three-clawed dragon, a symbol of imperial power, among lotuses and tendrils. It was possibly used at the Ming court in the early fifteenth century as a gift from the emperor to his attendants or to foreign rulers and dignitaries. Though the form of the flask has been traditionally used for holding liquids, the scale of this one indicates its function was probably decorative rather than functional. The Japanese ritual art of preparing and drinking tea (chanoyu) served as inspiration for the creation of special ceramics. This dish is an esteemed ceramic created for use in chanoyu and as part of a formal meal (kaiseki) that was sometimes served during the ritual. On this dish, the iron pigment of the design appears light blue-gray under the thick, milky feldspar glaze—one of the distinguishing characteristics of Shino-type ceramics. This jar, though more decorative than functional, is based on the form of vessel used for storing tea leaves. One of only a handful of seventeenth-century potters whose name is recognized today, Nonomura Ninsei operated an extremely successful kiln in Kyoto called Omuro that catered primarily to important patrons in Edo (present-day Tokyo). His seal is imprinted on the unglazed base of this important jar decorated with mynah birds. It was designated an Important Cultural Property by the Japanese government and Mr. Rockefeller had to obtain special permission to purchase it.

The section titled “Regarding Gods and Kings” includes superior examples of South and Southeast Asian sculpture associated with the transmission of Hinduism and Buddhism in the region. A Chola-period bronze sculpture of Shiva Nataraja, depicted in fluid motion, demonstrates the extraordinary craftsmanship of the sculpture of this era. Other sculptures in this section demonstrate how aspects of Indian Hinduism and Buddhism were blended with indigenous beliefs and incorporated in the art and architecture of Southeast Asia. 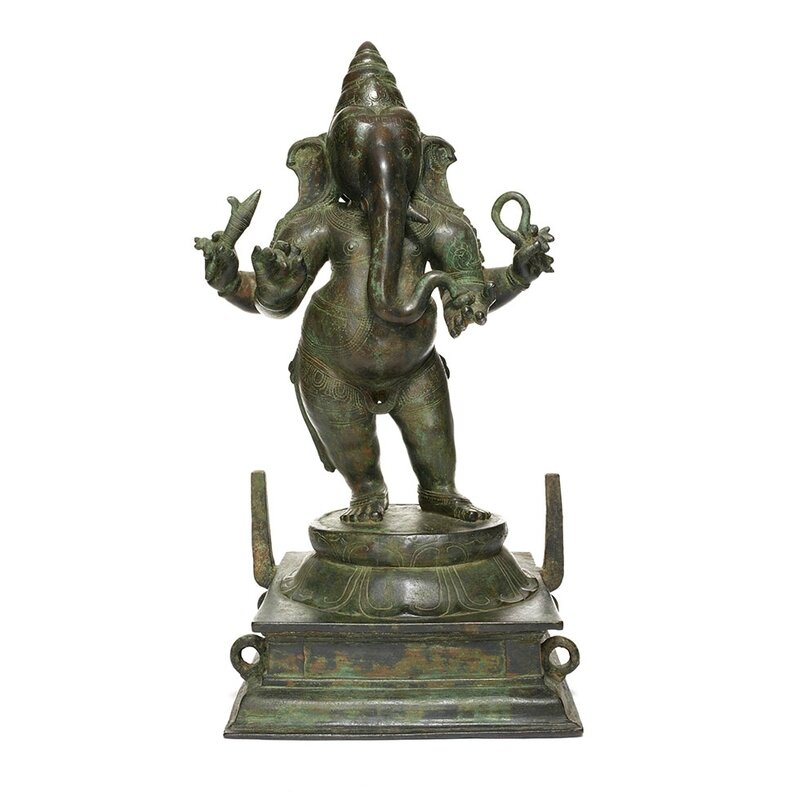 Ganesha, the elephant-headed son of the Hindu god Shiva and his consort Parvati, holds a mace and lasso that symbolize respectively his position as a god of war and his ability to advantageously ensnare a devotee. He also holds his own tusk, which broke off in a battle with a demon, according to one legend. Today, a portable bronze image of a standing Ganesha, like this one, typically commences festival processions, prior to the appearance of the main deity, Shiva, and the rest of his entourage. In this capacity Ganesha serves as the deity of auspicious beginnings. Ganesha is also worshipped as the god of luck and remover of obstacles. During the Chola period Shiva Nataraja may have served as an emblem for kingly aspirations since his dancing posture evokes the successful warrior, a role that was one of the highest ideals of the kings of this period. Surrounded by a fiery aureole and wrapped in serpents, Shiva performs the dance of bliss with an energy that forces his matted locks outward. Entangled in his locks is the river goddess Ganga (Ganges). In his upper hands Shiva holds a drum, which symbolizes the rhythm of creation, and fire, the destructive force of the universe. His open right palm signifies protection and his left hand points to his raised foot, signifying refuge and deliverance. Mushalagan, the dwarf demon of ignorance and illusion, lies prostrate below. Chola-period craftsmen are considered outstanding in the history of the world. The three-dimensional animation and plasticity of the sculpture attests to this well-deserved rank. This figure of a woman wears a long skirt, known as a sarong, which has been wrapped around her waist and tied at the front. Additional folds of cloth fall in the center of the skirt in a stylized pattern that is often called a fish-tail motif. The lines incised under her breasts were considered a sign of beauty. These three bronze fittings—most likely used to embellish a wooden palanquin for the court or aristocracy—are each made of a shell-like section topped with a stylized flower, probably a lotus. Two of the fittings have hooks that resemble the stalks and leaves of the lotus. Comparison with other objects of this type suggests that these hooks may once have held rings. The lack of volume in the floral decoration found on these fittings parallels the linearity found on twelfth-century sculptures; these pieces follow the style of decoration displayed on the famous Cambodian temple mountain of Angkor Wat.

The third section, “Transmission of Buddhism,” contains fantastic beings from the three forms of Buddhism, exemplifying the complexity of the representation of Buddhist deities among these traditions across Asia. A large cast image of the Bodhisattva Maitreya is considered to be one of the world’s finest examples of eighth-century Southeast Asian bronze sculpture. Buddha images created in the service of Vajrayana or Esoteric Buddhism, such as this piece, are sometimes shown crowned and jeweled. It is one of four spectacular carved Pala-period sculptures in the Asia Society Museum Collection. Among other things, these adornments emphasize the Buddha’s role as a universal sovereign. In this depiction, an ornamented Buddha is surrounded by four smaller images of himself, each of which represents an important scene from his life. The inscription, translated by Dr. B.N. Mukerjee, reads: “The dharma which is produced by the cause and the reason of all the causes and their cessation are said by Tathagata [the Buddha], the great śramana [monk].” In this elaborate sculpture, the Buddha, his hands in the gesture of teaching, is seated on a lotus that rises from water inhabited by serpent deities (nagas). The Buddha’s distinctive costume suggests that the sculpture depicts the consecration of Shakyamuni as king of the Tushita Pure Land, the abode of all buddhas before their final rebirth on earth. The Sanskrit inscription on the base of this important piece lists the donors as Sankarasena, a government official, and Princess Devshira. 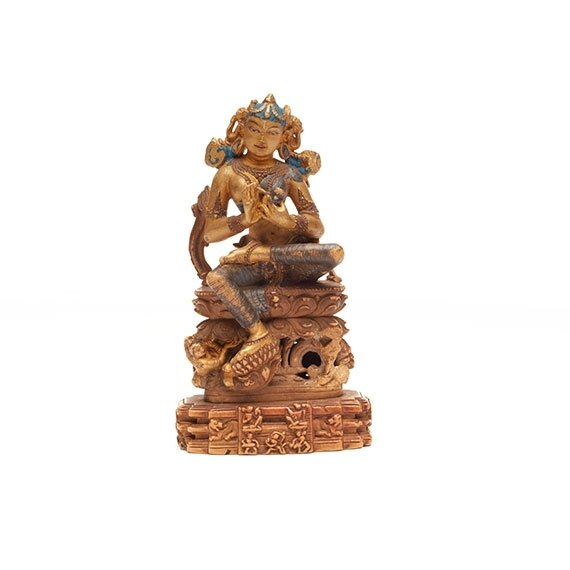 This goddess, depicted making the gesture of teaching, may be a representation of one of the two most important goddesses in Buddhism: Tara and Prajnaparamita. These goddesses can often be distinguished by the different lotuses they hold, but since only fragments of the lotuses remain on this sculpture, the figure’s identity remains uncertain. One potential clue that supports identification of this goddess as Tara is the lotus bud held in her left hand. It is likely that the entire image was once painted. The use of blue pigment in her hair is commonly seen on images that have been worshipped by Tibetan Buddhists. 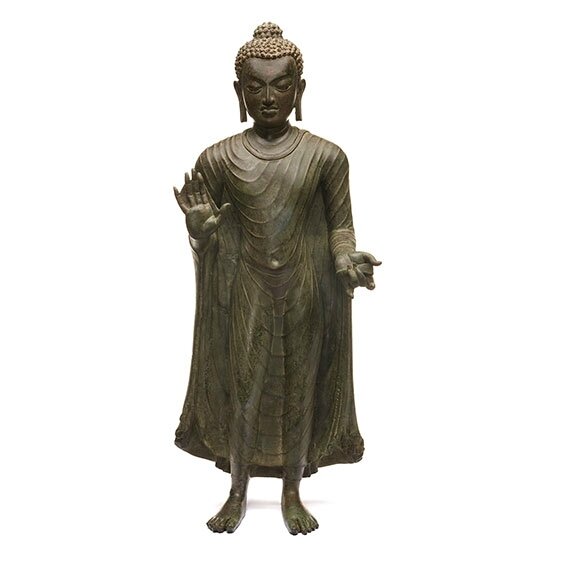 In this rare and important bronze from eastern India, the Buddha raises his right hand in the gesture of reassurance (abhaya mudra) and holds a piece of cloth in his left hand. The style of this Buddha’s nearly transparent robe follows conventions established in Sarnath (east-central India) in the last quarter of the fifth century. The Buddha’s webbed fingers, snail shell–shaped curls, and the bump on top of his head are among the thirty-two auspicious marks (lakshanas) described in Buddhist literature that signify the Buddha’s advanced spiritual enlightenment. This large, cast image of the Bodhisattva Maitreya (the Buddha of the Future, destined to become the next mortal buddha after Shakyamuni) is one of the finest eighth-century Southeast Asian bronze sculptures in the world. The scanty clothing, long matted hair, and lack of jewelry indicate that this image represents Maitreya as an ascetic bodhisattva, a type found throughout Southeast Asia from the seventh through ninth century. Bodhisattvas appealed to and were worshipped along with the Buddha all over South and Southeast Asia. 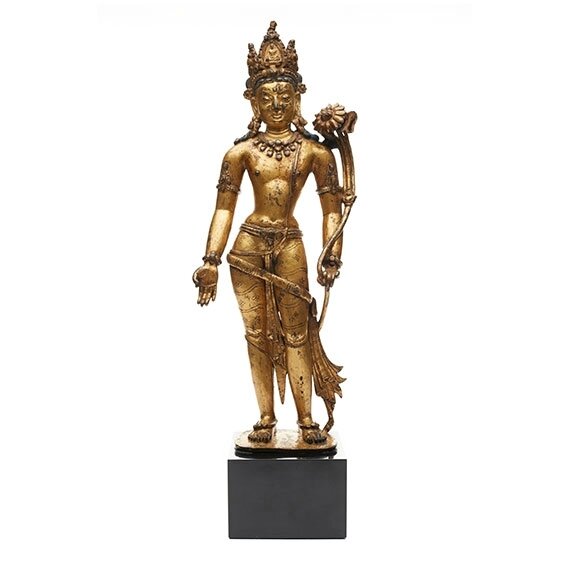 This sculpture depicts a form of Avalokiteshvara that was extremely popular in Nepal. The bodhisattva can be identified by the lotus he holds in his left hand and by the small seated image of the Buddha Amitabha, his spiritual progenitor, in his crown. A large circular loop coming out of the back of the sculpture indicates that this figure was once surrounded by a mandorla (body halo).