OLOGNE.- Galerie Karsten Greve announces Lucio Fontana. Crosses, presenting the first comprehensive exhibition dedicated entirely to a group of crucifixes from the ceramic works of Lucio Fontana, with 20 small-scale sculptures, whose figurative composition draws on motifs of Christian iconography, as its focal point.

For more than 40 years, Galerie Karsten Greve has displayed the works of Lucio Fontana (1899 – 1968). It was in 1977 when Galerie Karsten Greve – at the time in its original Lindenstraße location in Cologne – first exhibited thirty works of seminal importance – found today in some of the most prestigious museums, foundations and collections. Soon after in 1980, the exhibition Plastiken und Bilder 1953-1962 presented a selection of Concetti spaziali, Buchi and Tagli. In 1994, Galerie Karsten Greve Paris extensively displayed Fontana´s sculptural works before dedicating another substantial solo-exhibition titled Io sono uno scultore e non un ceramista to these in 2012, a body of work constituting a central element to the artist’s oeuvre. In its numerous publications the gallery also examines Fontana’s artistic output with academic rigour. The latest publication Crosses, accompanying the most recent exhibition and featuring texts by Choghakate Kazarian, Musée d´Art Moderne de la Ville de Paris, and Prof. Ugo Perone, Humboldt-University, Berlin, provides a detailed overview of the range of depictions of cross-motifs in Fontana´s work. Lucio Fontana´s primary concern concentrates on three-dimensionality and spatial questions, substantiating his artistic self-conception as a sculptor. Influenced by his father’s profession as a stonemason and sculptor specialized in producing headstones and after temporarily working in his studio, Fontana began creating ceramic works in 1935. In 1936 he collaborated with the Sèvres manufacture to produce porcelain works. Fontana described his conception of ceramics as “the endeavour to create pure art – shape, colour and oscillating light – anti-decorative, if one assumes decorative art to be decadent.”

Fontana’s early chromatic aniline paintings, whose composition is not only determined by the application of colour but mainly through actual interference with the integrity of the surface of the image carrier, were a means for him to explore concepts of three-dimensionality. The way in which Fontana lacerates the traditional canvas is firmly anchored in a revolutionary understanding of art in keeping with the spirit of the post-war age, which, being informed by Futurist ideals, turns towards a radical dynamism after 1947. Already in 1946, Fontana underlines in his Manifesto bianco the need to eradicate all art that is static, to overcome the fixed and inert, advocating instead for the primacy of time and movement within space. This new aesthetic was defined by “seizing the space by disengaging with the earth and the horizon, two elements which for millennia had constituted the basis of aestheticism and proportion.”(Lucio Fontana) A group of Milanese artists, among whom Fontana played a leading role, founded the movement of Spazialismo in 1946, gaining wider recognition during the 1948 Venice Biennale. With the traditional painting or image carrier deemed as “old fashioned” by the artists and therefore obsolete, their objective was to abate the “virtual”, illusory space of pure depiction and establish the spatial experience in concordance with scientific findings in a synergy of time, direction, sound and light at its apex.

Upon realizing that natural elements such as particles, rays or electrons impact surfaces uncontrollably and with great force, Fontana – in a dynamic execution of this knowledge and in order to achieve a distinctive plasticity – began piercing “old” canvases with cuts and holes. Led by this ambition to challenge painting in its flatness and thereby the ability of the representative image to transcend beyond itself, Fontana’s revolutionary gestures precipitate the permeability of the canvas, illustrating its interaction with space as a „continuum that unfolds freely und endlessly“, at the same time dissolving the line between painting and sculpture, as both media culminate in a consummate, an absolute Concetto spaziale. Concurrent with innovations to promote spatial and purely abstract art within Spazialismo, Fontana created figurative works, which were - for the most part - crosses and crucifixions. In them, he applied the spatial concept of the Concetto spaziale to thematically bound works. Fontana created most crosses and crucifixions during the height of his preoccupation with spatial concepts between 1947 and the mid-1950s. Lucio Fontana’s material contribution to the 1948 Venice Biennale was a set of four sculptures, among them the work Crocifissione (1948), also displayed in this exhibition. The appropriation of the space through expressive and dynamic gestures is visible in the upward movements of the figures, in the surging loincloth of Christ and in the expansive folding of the garments on his figures. Here Fontana attempted a “complete annihilation of volume” to allow for the opening and expansion of space in an almost baroque style: the configurations are, with the exception of the distinctive silhouette of the cross, dissolved in a turbulent structure, transformed into unadultered, aerodynamic fluctuation and speed, to then be abstracted as an expression of the “drama of movement.”

The works exhibited in Crosses are therefore Fontana‘s expression of a new space-consuming approach to art and at the same time exist within a tradition of iconography that includes crucifixions, the deposition from the cross, ascent into heaven and Madonna with child. They exude a captivating energy as Fontana’s spatial concept becomes accessible in a tantalisingly sensual way. Their surface lustre and iridescent colouration, the voluptuous crescendo of expanding shapes, incorporating the airy surroundings of the figurines – acts as an embodiment of the atmospheric Ambienti spaziali, in which the fast-paced and spontaneous manipulation of the clay is visibly inscribed into the works through cuts and gashes. Transient technique takes the place of intricate moulding, visualising the process of creation and the encroachment of space itself. 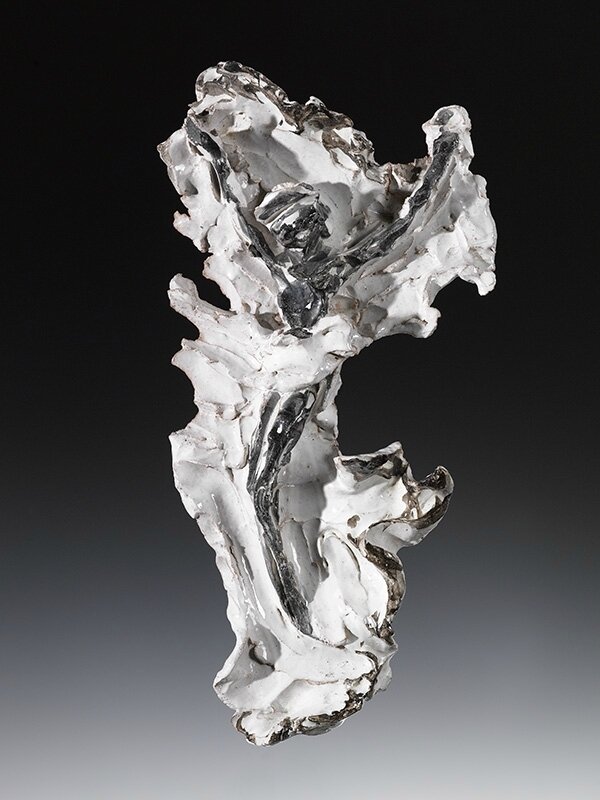