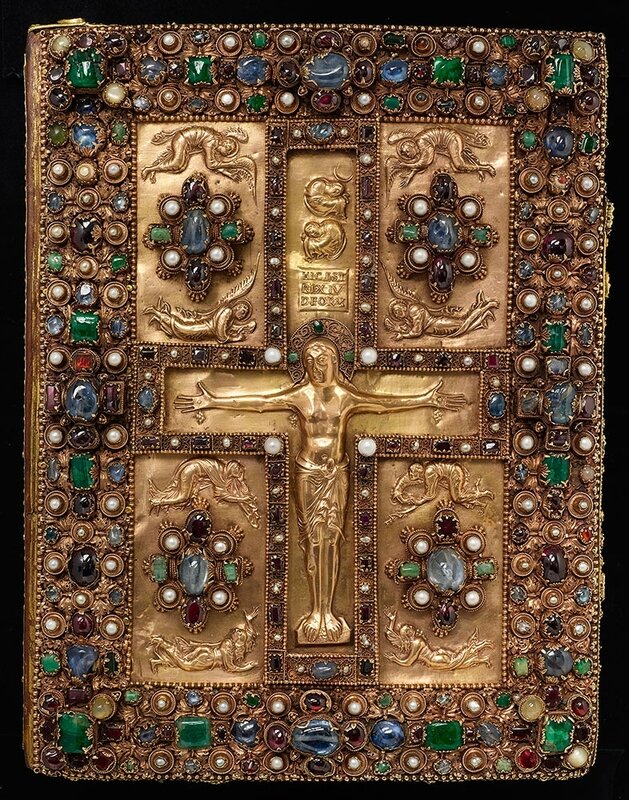 Jeweled Cover of the Lindau Gospels, France, ca. 875. Gold repoussé Crucifixion and ten mourning figures, including personifications of the sun and moon. Workshop of Charles the Bald, grandson of Charlemagne. On: The Lindau Gospels, in Latin Switzerland, Abbey of St. Gall, between 880 and 899. Manuscript on vellum. Purchased by J. Pierpont Morgan, 1901.

NEW YORK, NY.- Pierpont Morgan, the founding benefactor of the Morgan Library & Museum, was drawn to the beauty of gems. He acquired and later gave away large collections of valuable stones, including the legendary Star Sapphire of India to New York’s American Museum of Natural History. He also became fascinated with medieval manuscripts bound in jewel-laden covers.

Magnificent Gems: Medieval Treasure Bindings brings together for the first time the Morgan’s finest examples of these extraordinary works. During the Middle Ages, treasure bindings were considered extreme luxuries, replete with symbolism. On a spiritual level they were valued because their preciousness both venerated and embellished the sacred texts held within. But the bindings were also meaningful on a more material level, as the sapphires, diamonds, emeralds, pearls, and garnets from which they were made served as evidence of their owner’s wealth and status.

Magnificent Gems features such masterpieces as the Lindau Gospels (ca. 875), arguably the finest surviving Carolingian treasure binding. Also on display is the thirteenth-century Berthold Sacramentary, the most luxurious German manuscript of its time. In total, nine jeweled medieval works are presented, along with a number of Renaissance illuminated manuscripts and printed books in which artists elaborately depict “imagined” gems. On view through January 7, 2018, the exhibition is installed in the Morgan’s intimate Clare Eddy Thaw Gallery, evoking the atmosphere of a medieval treasury.

“Pierpont Morgan’s collecting was shaped by three key concepts, an object’s beauty, its craftsmanship, and its historical importance,” said Colin B. Bailey, director of the Morgan Library & Museum. “Medieval treasure bindings meet these criteria in consummate fashion. The Morgan is fortunate to hold some of the world’s finest examples of these works, and we are especially pleased to bring them together in one gallery for the very first time.”

The centerpiece of Magnificent Gems is the unparalleled Lindau Gospels. The first jeweled binding acquired by Pierpont Morgan, it was made in the court workshop of Charles the Bald, grandson of Charlemagne.

The dominant feature of its front cover is a gold repoussé Crucifixion, with ten mourning figures surrounding Christ. The architectural features of the border allude to the Heavenly Jerusalem, the city made possible by Christ’s sacrifice. The raised stones in the borders and the tiny footstools protect the delicate repoussé work when the book is open.

Judith of Flanders (d. 1094) was powerful, wealthy, and pious. In 1051 she went to England with her husband Tostig, where the pair made donations to various religious establishments and she commissioned several Gospel Books which are in the Morgan’s collections.

The manuscript was probably made in Canterbury around 1060, but its binding (left) with its silver-gilt repoussé figures of Christ in Majesty and symbols of the four evangelists is likely Continental work of the last third of the eleventh century. Many of the gems, especially those with foil behind them, are nineteenth-century replacements added after the manuscript was acquired by the Earl of Leicester.

Jeweled Cover of the Lindau Gospels, France, ca. 875. Gold repoussé Crucifixion and ten mourning figures, including personifications of the sun and moon. Workshop of Charles the Bald, grandson of Charlemagne. On: The Lindau Gospels, in Latin; Switzerland, Abbey of St. Gall, between 880 and 899. Manuscript on vellum. Purchased by J. Pierpont Morgan, 1901.

Another highlight in the collection is the silver-gilt binding with an ivory plaque of St. Theodore (right), which is more splendid than the manuscript within. The book, however, was regarded as an important religious relic, presumably having belonged to two eleventh-century saints: Dominic Loricatus, a hermit monk (d. 1060), and Peter Damian (d. 1072), his biographer. The central medallion at the top represents the Etimasia (preparation), signified as an empty throne with a book, symbolizing Christ’s Second Coming; it is flanked by two others with the Archangels Raphael and Gabriel. The other medallions, moving clockwise, show St. Paul, St. Luke, Archangel Michael (with kneeling donor), St. Mark, and St. Peter. The twelfth-century binding may have been made by Greek artists working in Ravenna. The Abbey of Weingarten in what is now Germany flourished under Abbot Berthold (r. 1200–32). He commissioned this early thirteenth-century Sacramentary—the most luxurious German manuscript of its time—as well as its splendid jeweled binding. At the center is a depiction of the Virgin and Child, reflecting her important cult at Weingarten. The twelve surrounding figures are identified by inscriptions. In the corners are the evangelists and their symbols. The other figures, arranged in pairs from top to bottom, are archangels Michael and Gabriel, the virtues Virginity and Humility, St. Oswald and St. Martin (the abbey’s patrons), and Abbot Berthold and St. Nicholas. The cover has nearly one hundred gems, although many are replacements. The exhibition includes a number of manuscripts and printed books with splendid illuminated depictions of gems that speak to the stones’ transformative powers and to their associations with saints and important historical figures.

A miniature by Maius from the Beatus of Liébana (ca. 945)— one of the Morgan’s greatest medieval treasures— shows John’s vision of the heavenly Jerusalem. According to Revelations (21:2–22), the city was laid out following the ideal square plan. It was made of pure gold with walls of jasper. There were three gates on each side, attended by an angel and the name of one of the tribes of Israel. Each of its twelve foundations had the name of an apostle and was adorned with a precious stone. The idea was based on the breastplate of Aaron, Moses’s brother, which was embedded with twelve gems each inscribed with the name of one of the tribes of Israel. The stones were subsequently associated with the zodiac and the months, ultimately leading to the concept of birthstones. Although Beatus in his work did not specify which gems were associated with the various apostles, they are paired in the illustration.

Girolamo da Cremona was one of the greatest illuminators of the fifteenth century and his last dated work, a two-volume printed Aristotle of 1483, shows him at his peak. In addition to clusters of jewels, there are now remarkable trompe-l’oeil effects, as in his frontispiece for that work. Clusters of gems seem to dangle in front of the page, while the illusion of torn edges reveals an architectural monument behind the page. The inscription on the monument’s base proclaims the role of patron Peter Ugelheimer, who “brought this Aristotle to the world.” Ugelheimer was a Frankfurt nobleman and businessman. At the top of the frontispiece, Aristotle converses with Averroës, his Muslim commentator; at the bottom, satyrs conjure classical antiquity. The volume has been called “the most magnificent book in the world.” 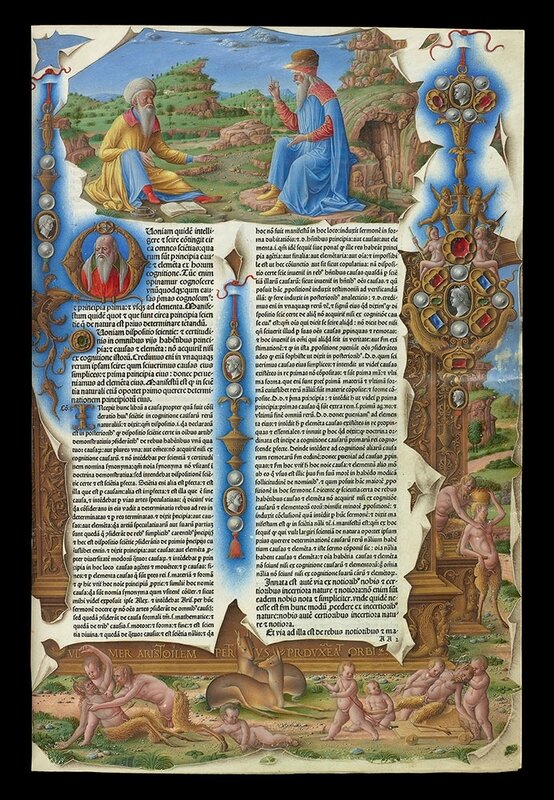 Although trompe-l’oeil borders depicting realistic cut flowers that cast shadows became popular in Flemish manuscripts about 1470, depictions of gems, pendants, and brooches were introduced later. Numerous examples of these occur in manuscripts illuminated by Simon Bening (1483/4–1561), the last great Flemish illuminator. It is not clear if they carry any symbolic meaning; they may just provide a bejeweled frame for this miniature of St. Luke writing his Gospel (ca. 1515). Luke, unusually, sits on his symbol, the ox. He became the patron of painters’ guilds in the fifteenth century and supposedly painted a portrait of the Virgin and Child, the subject of the scene in the rear room. 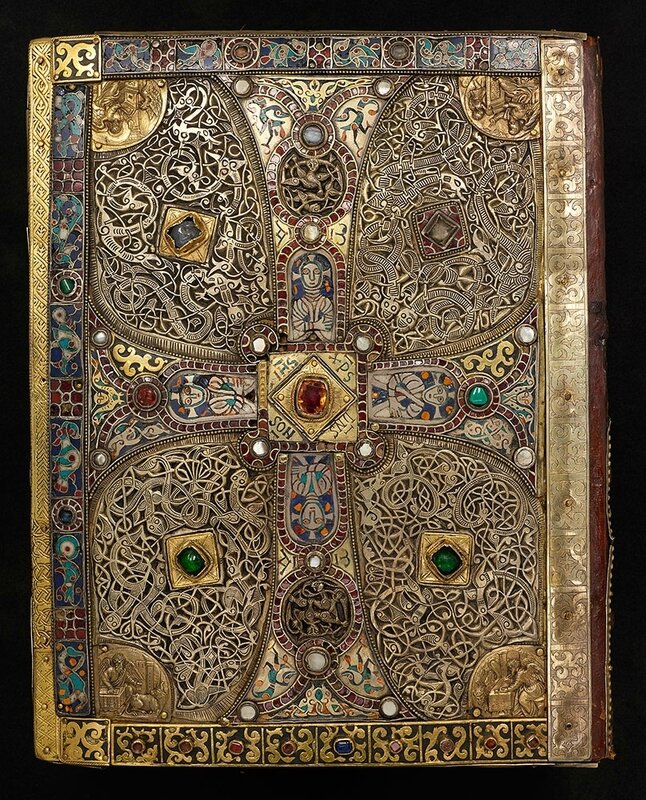 Jeweled Cover of the Lindau Gospels, possibly Salzburg, last quarter eighth century. On: The Lindau Gospels, in Latin Switzerland, Abbey of St. Gall, between 880 and 899. Manuscript on vellum. Purchased by J. Pierpont Morgan, 1901. Jeweled cover with cast figures of Christ in Majesty and the Crucifixion set against a silver-gilt filigree background with gems. Continental, perhaps Germanic, last third of the eleventh century. On: Gospels of Judith of Flanders, in Latin, England, between 1051 and 1064, for Judith of Flanders (1032–1094). Manuscript on vellum. Purchased by J. P. Morgan, 1926.

Jeweled cover of the Berthold Sacramentary, with statuette of the Virgin and Child in the center, the four evangelists in the corners, and eight other figures, including abbot Berthold himself. On: The Berthold Sacramentary, in Latin, Weingarten Abbey, Germany, ca. 1215-1217 , for Berthold, abbot from 1200 to 1232. Manuscript on vellum. Purchased by J. P. Morgan, 1926. Silver-repoussé and enamel cover with the Presentation of Jesus in the Temple, a small Annunciation at the bottom, and busts of the 24 prophets in niches, produced in the Kayseri silversmith workshop, ca. 1700. On: Gospel Book, in Armenian, Tokat, Turkey, 23 March 1700, written by Georg (Mik'ayel's son) for Hrip 'sime, who commissioned it in memory of her parents. Manuscript on paper. Purchased on the L. W. Frohlich Charitable Trust, in memory of L. W. Frohlich and Thomas R. Burns, in recognition of their interest and contributions to the art of the written word, 1998.