Alice M. Kaplan (1903-1995) is remembered for her generosity and devotion to the world of art and design in New York City. A student of fine art with an interest and passion for history, Kaplan pursued academia well into her adult life, which intimately informed the trajectory of her collecting habits. Her collection was of modest size, spanning various regions, periods and styles. Whether it was at auction or from galleries, she had a stellar eye for important examples of art.

Kaplan’s rich life story began in Budapest, Hungary in 1903. Her parents moved to New York early in her life, a city in which she thrived. She attended Teachers College at Columbia University and later studied under and alongside many American artists at the Art Students League in the 1920s. She took time to establish her family before returning to her artistic and academic endeavors in 1958, when she became involved with the American Federation of Arts where she held positions as trustee, vice president, and president. She returned to Columbia University to pursue her master’s degrees in art history, which she received in 1963. In her “last chapter,” as she referred to it, she began collecting more diligently to compliment her curiosity and growing knowledge of the arts, which strongly defined her public persona.

Kaplan is also well known for her lasting impact on institutions such as The New School, Cooper Hewitt, Smithsonian Design Museum, American Folk Art Museum, Carnegie Hall, Metropolitan Museum of Art, the Philadelphia Museum of Art, the Newark Museum, and the Yale University Art Gallery, among others. She received an honorary degree from Cedar Crest College in Pennsylvania, was published in Art Bulletin, and sat on numerous boards across different institutions. She aided in establishing funds and fellowships, proving herself to be a great advocate of students and artists, particularly in New York City. She also had a hand in reorienting the way art, and subsequently art history, was implemented in secondary education; her involvement with The Art of Seeing afforded a half million dollar grant from the Ford Foundation to produce a video series to be used in public schools to encourage a visual education of art.

Although Kaplan was known for her adoration of American Folk Art, as evidenced by her collection, she also acquired works from a variety of cultures, including pre-Columbian and Asian arts. As she learned more about different genres and cultures of art, so grew her desire to collect beautiful objects. She never ceased learning, even until reaching the age of 92.

Christie's sale of The Ideal Image: Eight Masterpieces of Indian and Southeast Asian Art in 2008 offered two exquisite sculptures from the collection, a south Indian granite figure of Venugopala and a Khmer figure of Uma. Christie’s is honored again to present this Gandharan gray schist figure of Buddha from the Alice M. Kaplan Collection. 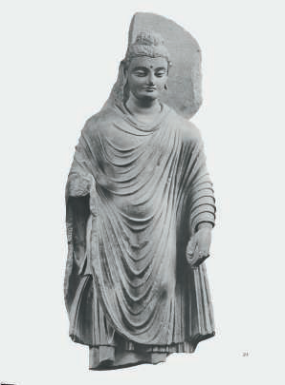 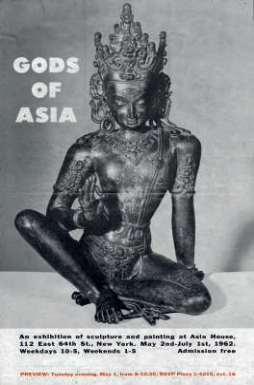 Note: This masterfully carved figure of Buddha embodies an idealized transcendent male form. Based on Greco-Roman prototypes, his thin sanghati delicately models his muscular shoulders, torso, soft belly and rounded thighs. His elegant neck is slightly elongated and his left knee bends in preparation to step forward. This subtle gesture along with the undulating folds of his robe allows one to imagine the fabric fluttering as he moves. The dynamism of the drapery contrasts with and emphasizes his serene expression. Heavy eyelids frame his almond-shaped eyes, his forehead remains perfectly uncreased, and there is no tension in his rosebud mouth. While activated with energy, movement and life, the Buddha is simultaneously in a state of otherworldly tranquility.

The skillful modeling of the body beneath the thin drapery elevates this figure above similar Gandharan works. Compare with a work from the Peshawar Museum (see H. Ingholt, Gandharan Art in Pakistan, 1957, p.111, fig.207) in which the body is modeled with thicker contours as seen in the deep folds of the robe and stocky form beneath. In the present work, the drapery is softer, allowing the body’s slender shape and elegant posture to emerge, and enhancing the meditative mood. The sculptor has also skillfully referenced Buddha’s earlier history as Prince Siddhartha by carving openings in the elongated earlobes where, as a prince, he would have worn heavy jewelry. This detail reminds the viewer that, while the Prince’s past was centered on excess, the absence of material goods – jewelry and fine clothing – emphasizes the Buddha’s renunciation of worldly attachments.

Compare the face of the Kaplan Buddha with that of another, also in the Peshawar Museum (see H. Ingholt, Gandharan Art in Pakistan,1957, p.113, fig.223). In both examples, the artist has skillfully carved and polished the stone to transform it into human skin and finely woven cloth. While the face of the published image has been carved in a rather formulaic manner, the present work has been carved by a master of naturalism. The softly rounded cheeks give way to hollows on either side of the skin, the upper and lower lids are nearly spherical to emphasize the eyes, and the pupils are carved. The quiet contours and gentle shadows model the flawless structure of the face, encapsulating the eternal youthfulness of the Buddha. Almost androgynous in appearance, the Buddha transcends gender, embodying the perfect balance of masculinity and femininity.

No sooner had the work been acquired by Alice M. Kaplan than she was asked to loan it for the Gods of Asia exhibition at the Asia House Gallery in New York (see illustration, below). This 1962 exhibition was envisioned by George Montgomery, then director of the Asia House Gallery, as a celebration of Asian art, highlighting masterpieces handpicked from important collections nationwide. The Kaplan Buddha was in good company alongside works from distinguished collectors such as Samuel Eilenberg and Nasli Heeramaneck. Notable participating museums included the Metropolitan Museum of Art, the Philadelphia Museum of Art, the Nelson-Atkins Museum, the Fogg Museum of Art and the Seattle Art Museum. To accompany the exhibition, Dr. Jane Gaston Mahler gave a lecture on 13 June 1962 entitled Gods of Asia; Origins and Aspects, associate professor of Fine Arts of Barnard College at Columbia University.

The Kaplan Buddha has a high aesthetic value, illustrious provenance and exhibition history, and is in a beautifully preserved condition. It is an important and rare masterpiece of Gandharan art.