The diamond, certified as D color, Internally Flawless and classified as Type IIa, meaning that it has been recognised as the most chemically pure and with exceptional optical transparency, sold to a private US buyer.

Susan Abeles, Head of Jewelry, Bonhams US, says: "This is one of the finest examples of a diamond there is given its rarity, color, cut, clarity and transparency. It was admired widely during our previews in New York, LA, Geneva and Hong Kong and the diamond is extraordinarily charming."

The auction also featured a number of Kashmir sapphires and sale highlights included:

- A sapphire and diamond ring by Stephen Russell. Featuring a cabochon sapphire, weighing 5.33 carats, set within a frame of old European cut diamonds, this sold to an online buyer for $235,000 (£174,000). The sapphire is certified as Classic Kashmir and has no indications of heat or clarity enhancement. 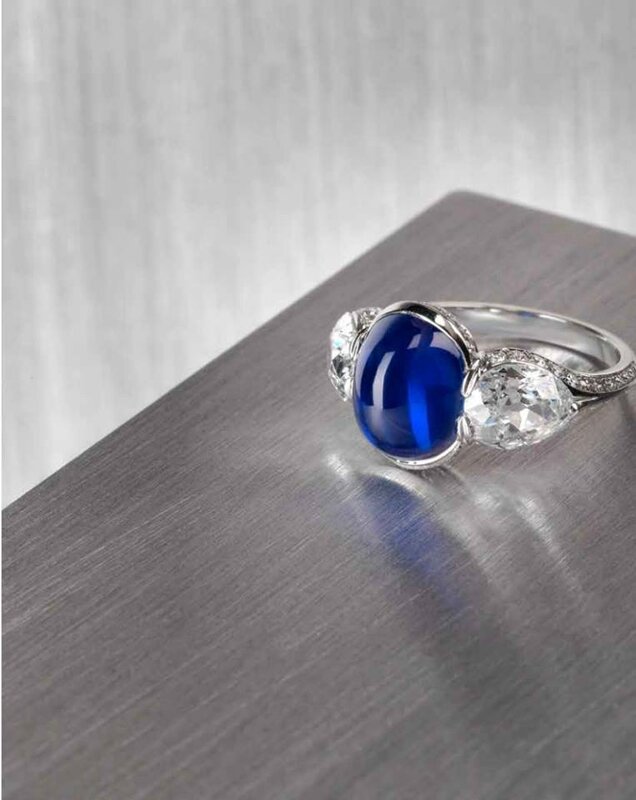 - An Art Deco Diamond Brooch by Raymond Templier, circa 1930. This spectacular brooch is of geometric design and features dramatic curvings, creating a three dimensional, sculptural effect. It is set throughout with old mine-cut diamonds and sold for $50,000 (£37,000).

- A sapphire and diamond clip brooch by Oscar Heyman, 1955. The brooch centers on a rectangular-shaped emerald cut 'no heat' Sri Lankan sapphire, weighing 13.03 carats, and is set within a radiating spray of tapered baguette and round brilliant-cut diamonds. It sold for double its pre-sale estimate with the hammer finally coming down at $87,500 (£65,000).

- A diamond necklace by Cartier. The riviere necklace, with an estimated diamond weight of 55 carats, is designed as a double row of graduated round brilliant-cut diamonds, accented with baguette-cut diamond spacers. It sold for $106,000 (£79,000).

- An enamel and glass Medusa pendant by René Lalique, circa 1905, went under the hammer for $69,000 (£51,000), more than double its pre-sale low estimate. Lalique was known for portraying women in an ethereal profile with undulating hair, specifically Medusa, who is represented in this piece.

Fine jewelry from the personal collection of Gigi Guggenheim Danziger, wife of the former owner of Cartier Paris, also featured in the auction and its fascinating provenance proved popular with buyers around the globe.

The collection, featuring 32 pieces of fine jewelry, with the earliest piece dating back to 1957, included a number of signed Cartier pieces from the 1960s and 1970s. Highlights included:

- A ruby and diamond brooch by Cartier. This centers a rectangular-shaped step-cut diamond, weighing 4.24 carats, within a cluster of pear-shaped rubies, accented by marquise-shaped diamonds. This was given to Gigi Guggenheim Danziger as an anniversary present and Gigi wore it to the London premiere of The Godfather. It sold for $46,000 (£34,000).

- A sapphire and diamond brooch by Cartier. This centers a cushion-shaped modified step-cut, weighing approximately 7.10 carats, within a cluster of marquise and pear-shaped diamonds. Gigi was given this brooch by her husband in the South of France during a family vacation. It sold for $37,500 (£28,000).

Lot 121. From the personal collection of Gigi Guggenheim Danziger, wife of the former owner of Cartier Paris. A 7.10 carats Ceylon sapphire and diamond brooch by Cartier. Sold for $37,500 (£28,000). Photo Bonhams.

Susan Abeles, Head of Jewelry for Bonhams US, says: "We had a really interesting sale this September which featured the best diamonds you could buy, several Kashmir sapphires and some wonderful and extremely rare pieces of jewelry from the Art Noveau and Art Deco period. These all performed very strongly at the auction along with signed jewelry from names such as Cartier, Oscar Heyman and Raymond Templier.

"It was notable to see that collectors from all over the world participated in the auction."

And finally....the $8 garage sale brooch that's hitting the headline around the world

All eyes at the sale were on A diamond, emerald and ruby brooch, circa 1900, which was purchased at a garage sale in Ohio five years ago for just $8.00. The owner of the brooch gave it to her daughter to wear to church but she placed it in the bottom of her handbag and forgot about it.

On a chance visit to a jeweler many months later, she pulled out the brooch and was sharing the story about how she acquired it.

To her complete surprise, she was told the brooch was not costume as the diamonds were real. Bonhams was then approached and the Fine Jewelry team undertook some further detective work and confirmed to the client that the not only were the diamonds real, so were the emeralds and rubies – and they were gem quality.

Susan Abeles added: "Discoveries like these don't happen very often so we were delighted to offer this at auction where the actual value of the piece was finally realized."

Bonhams sells more jewelry lots each year than any other international house and has more dedicated jewelry auctions annually.