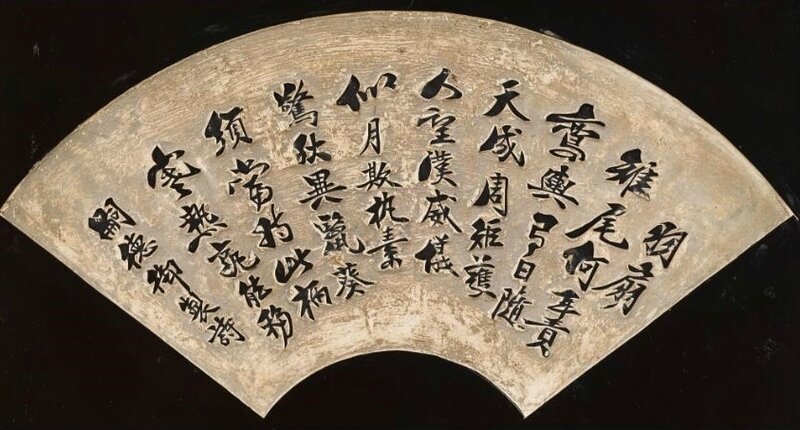 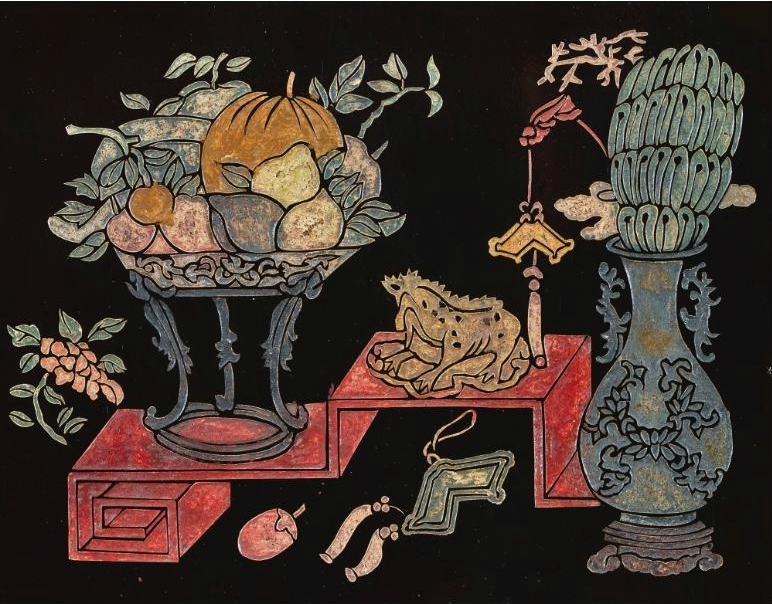 Note: With the founding contributions of the French painters Joseph Inguimberty, Victor Tardieu and Evarist Jonchère, alongside French-trained Vietnamese artists such as Nguyen Vạn Thọ and Nguyen Gia Tri, the Maison des Beaux-Arts de L’Indochine (MBAI) was instrumental in elevating lacquer painting to a novel artistic language unique to Vietnam. The school trained generations of artists acclaimed for their high level of technical ability. As a result of the École’s emphasis on creating a new cultural identity grafted from French modernist techniques, many students synthesized European aesthetic styles and indigenous craft sources to inaugurate a hybrid artistic vocabulary that continues to influence the nation’s art scene to this day. Many lacquer works fashioned by École student-painters are highly prized for this mesmerizing blend.

The present lot stands out as a particularly illustrious demonstration of the Vietnamese lacquer technique. Evincing a sense of grandeur and imperial nostalgia, the front side of the screen depicts a scene of the procession of the last emperor of Vietnam, Bao Dai, who is surrounded by bevy of soldiers, civil mandarins and servants, as they leave the Imperial Palace in Hue. The people standing in the sprawling palatial grounds dutifully face towards the emperor--the focal point of the work.

Drawing on the Western technique of fixed-point perspective, the artists capture the architectural splendour of the Imperial Citadel in extraordinary detail while remaining faithful to the layout of the palace. From an elevated perspective the screen shows the ornate timber roof and lacquered columns of Ngo Mon Gate (Moon Gate), the picturesque lotus-filled waters of Thai Dich Lake and the vast expanse before Thai Hoa Palace, where the Đại Nam emperors met with dignitaries and ministers.

The ceremonial spectacle portrayed pulsates with liveliness. The crowds and sheer volume of royal insignia, such as the massive Imperial flags fluttering in the wind, the gilded parasol and plaques shielding the emperor, as well as the richly ornamented court elephants, all lend the work a sense of opulence.

A rare and commanding ten-panel screen, this work is a testament to the MBIA school’s finesse in lacquer etching or engraving. Other comparable coromandel lacquer screens from the same period, included a screen created by the artist Nguyen Ben Bai currently in the collection of the Hanoi Museum of Fine Arts, as well as a piece that was offered to the Emperor Bao Dai and Empress Nam Phuong in 1937 that is in the Museum of the Imperial City of Hue.

Exemplary of the coromandel lacquer technique, the production of this work is characterized by a labour-intensive process demanding both dexterity and patience. The wooden screens are first coated in dark lacquer and meticulously incised with sharp tools, before being painted in with a dazzling array of colours and embellished with gold, mother-of-pearl and precious stones, ultimately resulting in a detailed image that is crisp and linear. Bathed in a remarkable variety of colours—from the traditional enameled roofs in vermilions and maroons to the shrubbery and palms lined with olive green and golden hues—this work is the fruit of the artists’ experimentations with a wide range of materials, including powdered eggshells, mother-of-pearl, charcoal powder and plant-based dyes, to produce a distinctive colour palette.

The reverse side of the screen features an ensemble of fourteen Vietnamese poems dating from the 19th century (mostly dating from the reign of the Emperor Tự Đức (1847-1883). All of the poems are  rendered in Chữ Nôm characters (Classical Chinese characters) etched in two distinctive calligraphic styles—the flowing semi-cursive script (hành thư) and the more formalist seal script (triện thư). They are elegiac verses describing the majesty of the emperor and the charming landscapes of Annam.

This is the first time that poems of Imperial origins were displayed in Vietnamese lacquer screen art. The poems not only give the overall work an added lyricism and historical provenance, it shows the endeavors of the École to achieve a harmonious balance within Asian artistic practice that balance between image and text.

This enormous screen is also lined by a border of classical coromandel patterns, traditional Vietnamese floral motifs, scholars carrying their symbolic fruit as well as other ritualistic objects.  Numerous “still life” designs illustrating fruits, peonies, vases, small animals and vines, are carved onto dark lacquer. These variegated motifs add a nice contrast to the detailed rendering of the imperial court scene and ultimately imbue the overall work with a sense of balance as well as symbolic meaning. 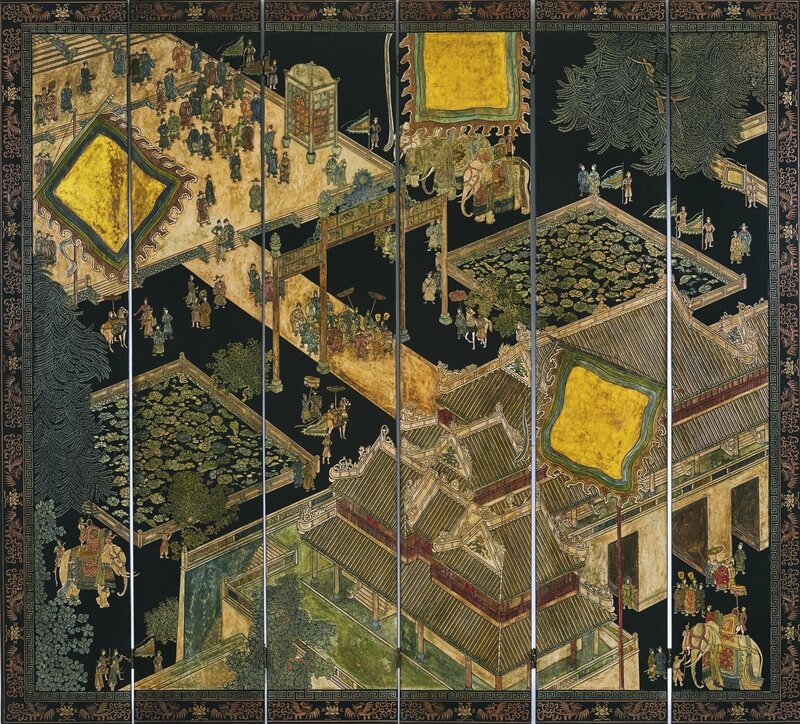 Maison des Beaux Arts de L’Indochine, The Departure Ceremony of the Emperor of Annam and the Procession of his Followers at the Impérial Palace at Hue (An Important Coromandel Lacquer Screen). Sold at Sotheby’s Hong Kong, 5 October 2015, Lot 306, for 1,500,000 HKD (193,543 USD) © Sotheby’s