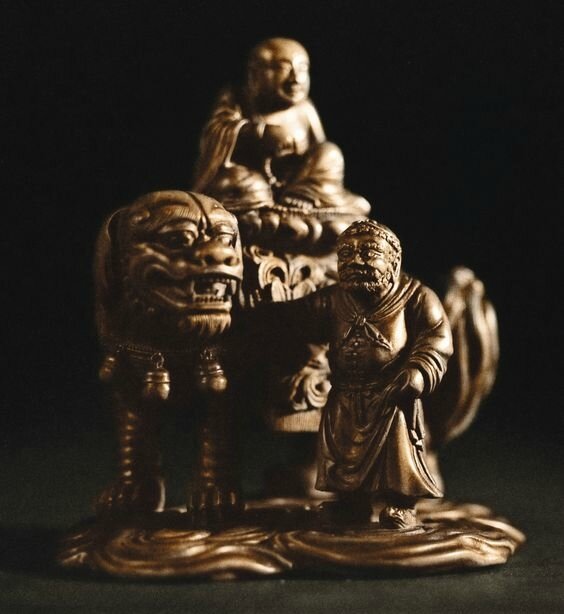 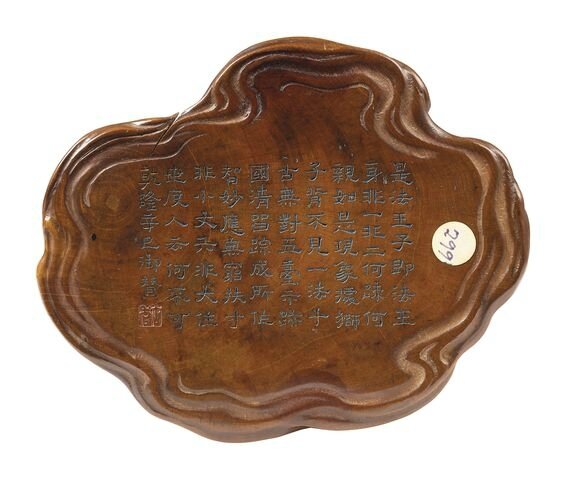 exquisitely carved to depict Manjushri seated in rajalilasana atop a lotus-form saddle on the fringed caparison of a lion, the tonsured bodhisattva portrayed with a serene expression and dressed in loose robes and holding a string of prayer beads in the right hand, the mythical beast rendered standing foursquare with the head turned to the left, further decorated with a bushy mane and tail detailed with fine incisions, the group with a standing foreign attendant with one hand on the collar of the beast, the figure depicted with curly hair and beard and clad in loose robes tied with a long sash at the front, all atop an irregular base decorated with cloud scrolls, the base inscribed with an imperial poem with traces of blue pigment identifying the deity as Manjushri, dated to the xinsi year of the Qianlong period (in accordance with 1761), followed by a red seal mark reading guxiang ('ancient fragrance'), the wood with a rich reddish-brown patina, wood stand

Note: Exquisitely carved to the smallest details, the present boxwood figure is modelled as a bodhisattva with a serene face and compassionate gaze, seated in rajalilasana and dressed in a robe draped over one shoulder. The lion, with alert eyes and sharp fangs, is caparisoned with a lotus-adorned saddle and decorated further with tasselled harness. Standing by the side guiding the lion is a foreigner with curly hair, with his long-sleeved shirt buttoned up and the lower robe hanging. The base is further decorated with fluent scrolls, creating the illusion of the bodhisattva on lion back elevated by sacred clouds. The finely carved Buddhist figure is inscribed with a long poetic inscription in clerical script, dated and concluded with a seal.

The poetic inscription on the base can be translated as:

This is the Prince of the Dharma, that is, the body of the Dharma King, which is never just one [has manifold phenomenological manifestations] nor yet can it be two [is only one in essence], so there is no question as to whether this is a distant or close likeness!  In such a phenomenological manifestation as this apprehended as perched on a lion’s back we do not see a true manifestation, for throughout ancient and modern times never has a true equivalent ever been made! However, this particular one was made after a manifestation that appeared at Wutaishan [Five Terrace Mountain, Shanxi] and one that took form and was handed down at the Guoqing Temple [Mount Tiantai, Zhejiang]. What the marvel of cognition can make of such manifestations is infinite in scope. Though only four fingers wide, it is not too small, and for a transformation body the height of a hand’s span, it is not too tall, so how can people who live just in this world reckon that it is not done well!

We can identify the bodhisattva as Manjushri based on the inscription as well as the lion that he was riding on. Manjushri is an idealisation of wisdom, with manju meaning beautiful, and shri good fortune, virtue, majesty, lord, an epithet of a god. As guardian of wisdom his image is often placed in the temple hall on the left of Shakyamuni, with Samantabhadra on the right as guardian of law, the latter holding the Dharma, the former the wisdom or exposition of it. Manjushri is looked on as the chief of the bodhisattvas and represents them, as the chief disciple of the Buddha, or as his son. Although depicted seated on a lion emblematic of its stern majesty as usual, that the present boxwood figure is carved without the five hair curls or a sword is noteworthy, since Manjushri is often represented with the curls to indicate the five wisdom peaks and the sword to symbolise wisdom.

Tibetans traditionally addressed Manchu leaders as ‘Manjushri Great Emperors’, due to the similarity in pronunciations of ‘Manchu’ and ‘Manjushri’; see Agui et al., Qinding Manzhou yuanliu kao [Researches on Manchu origins], Qinding Siku Quanshu ed., juan 1, pp. 3-4. The Qianlong Emperor, a devoted believer of Buddhism, not only proudly accepted this sacred title, but also proclaimed himself to be the reincarnated bodhisattva Manjushri, as evidenced in the Tibetan inscription at the lotus pedestal on a thangka painting of the Qianlong Emperor, illustrated in Classics of the Forbidden City: Tanka paintings in the collection of the Palace Museum, Beijing, 2011, no. 36. The Qianlong Emperor was also a frequent pilgrim to Buddhist temples and a devoted patron for such buildings, especially those designated to the worship of Manjushri. In the 26th year (1761), for example, it was recorded that the Emperor was in awe of the image of Manjushri in Shuxiangsi (‘Temple of the figure of Manjushri’) at Wutaishan, the legendary residence of the bodhisattva. Once he returned to the Forbidden City, the Emperor traced the image of the deity from his memory and ordered Ding Guanpeng to perfect the image with colours. The painting is now preserved in the National Palace Museum, Taipei, included in Illustrated catalogue of paintings and calligraphy in the National Palace Museum, Taipei, Taiwan, vol. 13, Taipei, 1994, pp. 127-128. The Emperor also commanded, for the newly built temple Baoxiangsi on Xiangshan (‘fragrant hill’), a stone carving to be made according to the painting. In the 39th year (1774), he built another Shuxiangsi designated to Manjushri in the Summer Palace, Chengde.

A large quantity of Buddhist figures of various materials was made by imperial order to be worshipped in palace temples and Buddhist halls. It is recorded that the Qianlong Emperor adhered to a high standard in the production of these figures. According to Qinggong neiwufu zaobanchu dang'an zonghui [General collection of archival records from the Qing imperial household department workshop], the Qianlong Emperor repeatedly demanded the department to make adjustments to the details of the Buddhist figures. In the 38th year (1773), for instance, the Emperor ordered that all the Buddhist animals produced thereafter have to “turn the heads to their tails”. Since the present figure was likely made earlier than the 38th year, the posture of the lion was not subject to this rule.

Apart from patronising and directly supervising the production of Buddhist images, the Qianlong Emperor had also written extensively on these religious artefacts. For example, the poetic inscription engraved on the current figure, titled Muke Wenshu xiang zan [On the carved wood Manjushri], was written to present his faith and devotion to the deity. The text was included in Qing Gaozong yuzhiwen chu ji [Anthology of imperial Qianlong texts, vol. 1], juan 30, p. 13, next to a related poetic text Muke Guanyin xiang zan [On the carved wood Avalokiteshvara], ibid.; both appeared to have been written between the 25th (1760) and 26th years of the Qianlong period (fig. 1). A chenxiangmu carved figure of a bodhisattva in the collection of the Palace Museum, Beijing, is very similarly modelled with the deity seated in rajalilasana, depicted riding on a lion led by a foreigner, inscribed with the same text on the base, and published in Zhongguo meishu fenlei quanji. Zhongguo zhu mu ya jiao qi quanji [The complete collection of Chinese bamboo, wood, ivory and rhinoceros horn], vol. 2: Mudiaoqi [wood carvings], pt. 1, no. 68. The Palace Museum figure, perhaps slightly larger than the present one, however, is identified in the catalogue as Maitreya according to his hairstyle and emblem, p. 23.

A related chenxiangmu figure of Avalokiteshvara (height 12.6 cm), engraved on the base with the Guanyin poetic text mentioned above, is included ibid., no. 69, and again illustrated in Classics of the Forbidden City: Guanyin in the collection of the Palace Museum, Beijing, 2012, no. 202. According to Qinggong neiwufu zaobanchu dang'an zonghui, a carved fragrant wood figure of Avalokiteshvara (with yellow robe and gold decorated wood pedestal), together with a painted wood altar cabinet, were presented to the Emperor in the 27th year of the Qianlong period (1762). This pedestalled chenxiangmu figure, with a tailor-made hexagonal shrine, was later placed in Qingliangchanku of Jingmingyuan. The Avalokiteshvara figure in the Palace Museum, Beijing, might be similar to the one mentioned in the record and have originally been placed in an imperial hall for adoration.