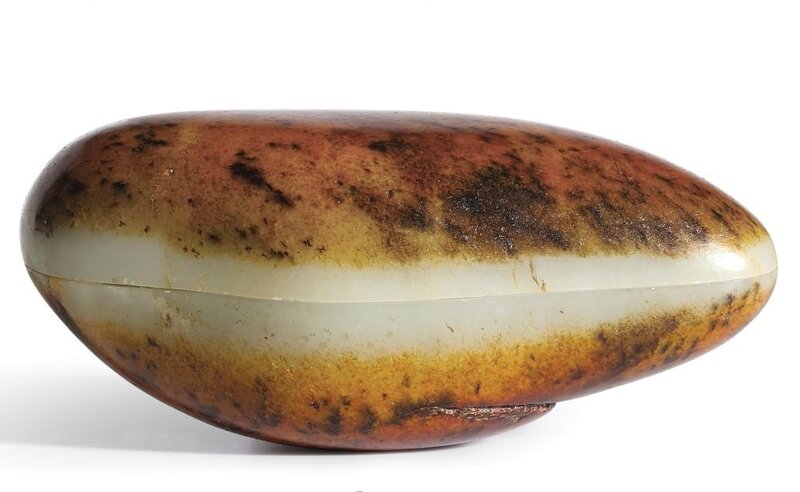 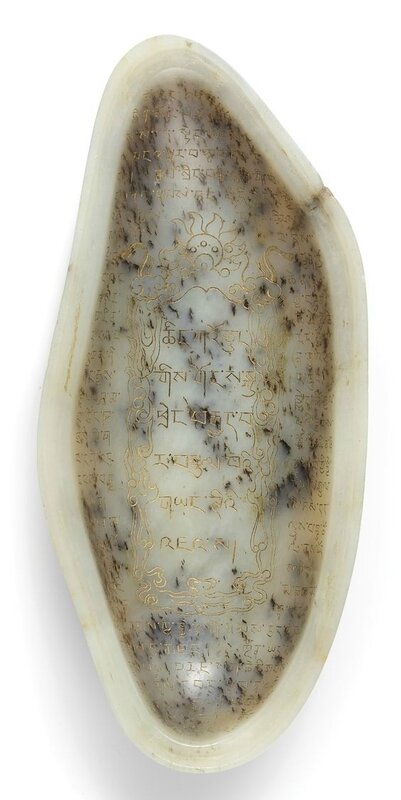 of irregular pebble form, skilfully worked and hollowed into a box and cover, the exterior preserving the original pebble-form and attractive russet skin with dark brown and black speckles, the interior of the box intricately inscribed in gilt with an extensive inscription in Tibetan, the interior of the cover centred with a central cartouche recording how the Qianlong Emperor bestowed an imperial 'Edict of Jade' to the eighth Dalai Lama, all framed by lingzhi scrollwork, flames and a lotus bloom, later soapstone stand.

Note: This extraordinary artefact, a natural jade pebble skilfully worked into a box and cover, and intricately inscribed in gilt in Tibetan text, is an object of superlative historical importance.

It was bestowed by the Qianlong Emperor to the eighth Dalai Lama of Tibet at the peak of China’s golden age, at the height of its wealth and territorial power, together with a jade seal and set of jade album leaves. The album leaves, comprising a certificate of appointment inscribed in Han, Tibetan, Manchu and Mongolian with precisely the same inscription as on the current lot, are recorded as having been conferred in 1783. Originally in the collection of the Potala Palace, the seal and album leaves are now preserved in the Tibet Museum, Lhasa. All three jade artefacts are mentioned in the biography of the eighth Dalai Lama, written in Tibetan by the tutor of the ninth Dalai Lama and regent of Tibet, where the current lot is described as a ‘a golden decree having the outward appearance of a precious gem’.

The long inscription can be translated as:

This is a decree (bka’) from the Emperor (hung ti = huangdi) who exercises his rule over the whole hearth owing to the almighty power of long-living heaven. All the good fortune of more than one hundred inner outer and middle kingdoms, the joy and happiness, and all living creatures without exception are steered by law. Whence the precious teaching of the great Master Tsongkhapa’s yellow hats, devotion, and religion have greatly flourished and are praised far and wide. Thou, the Dalai Lama, are the foremost spiritual heir of the victorious Tsongkhapa and the eighth successive incarnation of Gendün Drup. All the wisdom and good virtues without exception were brought to absolute perfection in the course of innumerable lifetimes, relying entirely on superior pure intention. They acted as the lord protector of all beings from the central and outlying [regions of Tibet]. In the past, at the time of the ancestral sovereign A baraja sag che, the Fifth Dalai Lama, having met the Emperor in the distant Empire [of China] was bestowed great awards. Hitherto, during four successive existences, all the rewards of the state were obtained. Where to find peace of mind? As a result of pursuing great kindness and affection, the teaching of the yellow hats expanded and spread. Thou, the Dalai Lama, are the great lama holder of the teaching of the yellow hats. During many human lives, you have set out to have all creatures of the earth reach higher realms and ultimate liberation, acting in a perfect manner on many amazing occasions; hence, for sure, the numerous merits of the state and festival of spiritual deeds. Lama, thy virtuous achievements have been brought to perfection, spreading and accomplishing the supreme and precious doctrine of the Buddha. I very much rejoice and thus present you the most excellent Edict of Jade (g.yang Ti’i ’ja’ sa) and a seal (tham ka). Lama, as they are owned by thee, honour them in the Potala at all times. The state would be delighted when there is practical cause for you to use this seal in your official statements (zhu yig). Otherwise, use the old seal for less important matters and correspondence (bskur yig). Having earnestly accepted the gifts, there is favourable ground for the thought of governance. You have made arrangements for the dissemination of the teaching of the yellow hats and for the glory of all beings’ felicity, and so forth, in accordance with the tradition of the Dalai Lama’s previous incarnations. This was put down with the purpose of perpetually augmenting the manifestation of joy and happiness to the birthplace of Taiji (ta’i chi) whose sway will last ten thousand years owing to your extreme kindness and good aspiration.

In the central cartouche it is recorded how the Qianlong Emperor, referred to by his temple name, Qing Gaozong (ching ka’o cung), bestowed an imperial ‘Edict of jade’ (g.yang Ti’i ‘ja’sa) to the eighth Dalai Lama. The Tibetan term ‘ja’ sa, which has been used in the context of Mongol-Sino-Tibetan relations since the 13th century, designates almost exclusively an ‘imperial’ or ‘legitimising’ decree.

Both the cartouche and the main inscription are written in Tibetan uchen script (dbu chen). It begins inside the lid and continues into the bottom of the case. The Tibetan letters are finely outlined in gold. The drawing of the letters was occasionally made difficult due to the hardness and concave shape of the stone. Some letters are unclear and sketchy; for instance, the letters ‘nga’, ‘da’, and ‘ra’ cannot always be distinguished ( ང་ ད་ ར་ ); other letters were inadvertently inverted like ‘ja’ and ‘za’ ( ཇ་ ཟ་ ) or forgotten, suggesting that the engraver may not have been familiar with Tibetan script. As some formulaic expressions and stock phrases attest, the content of the text, however, conforms to other diplomatic documents issued by the Qing, particularly under the reign of the Qianlong Emperor.

This imperial gift is related to a fascinating, albeit sensitive, historical context, produced during a tumultuous era that has come to divide historians over the political status of Tibet. The eighth Dalai Lama, Jamphel Gyatso (1758-1804), illustrated here (fig. 1) in a thangka of Buddha Nagaraja, sold at Sotheby's New York, 15th October 2001, lot 41, reluctantly accepted the responsibility of the government in 1781. On that occasion, he received several official documents and gifts from the Qianlong Emperor, including a gold seal inscribed in four languages (gser tham zhal ris skad bzhi shan sbyar), as well as a golden imperial proclamation (bka’i gser yig) having the outward appearance of jade (g.yang Ti’i dpyad pa). Yet, the involvement of the Dalai Lama in the affairs of the state seems to have been minimal. In fact, Ngawang Tsultrim (1721-1791), who had been appointed Regent of Tibet (srid skyong) by the Qianlong Emperor in 1770, remained in office until 1786 at the behest of the eighth Dalai Lama. Jamphel Gyatso eventually ruled Tibet on his own for a period of four years, from 1786 to 1790. From the content of the inscription, it is clear that the Dalai Lama had not yet taken full control of the government. As such, he is requested “to reflect upon the possibility of leading” Tibet (ded kyi dgongs pa dang mthun sa). For that purpose, he was granted the Edict of Jade (g.yang Ti’i ‘ja’ sa) and a seal (tham ka). These are now preserved in the Tibet Museum, Lhasa, illustrated in The Witness of History. A Collection of Cultural Relics Concerning the Successive Central Governments Governing Tibet Preserved in Tibet Museum, Chengdu, 2015, pp. 138-141. Furthermore, the Dalai Lama was instructed to use the new seal in all official matters and to revert to the use of the old seal only for minor decisions. A similar event is discussed by the Chinese historian Wang Jiawei in The Historical Status of China’s Tibet, 2nd ed., Beijing, 2000, p. 628.

The author maintains that the eighth Dalai Lama was granted “a jade certificate of appointment and a jade seal of authority” by the Qianlong Emperor in 1783, quoting a Chinese source that closely follows the Tibetan text under review:

You, the Dalai Lama, are the legal descendent of Zongkapa … you are hereby granted the jade certificate of appointment and the jade seal of authority, which you may enshrine in the monastery of the Potala (namely the Potala Palace) to guard the gate of Buddhism for ever. Documents sent for the country’s important ceremonies should be stamped with this seal, with all other reports stamped with the original seal. Since you enjoy such favour, you need to redouble your efforts to promote self-cultivation and study and propagate Buddhist classics, and assist me in promoting Buddhism and goodness of the previous generation of the Dalai Lama for the people and also for thelong life of our country… (Records of the Qing Emperor Gaozong, vol. 1186, p. 9).

It is well known that the Qianlong Emperor made Manchu mandatory for all military and political correspondence, while simultaneously establishing an ‘Office Dedicated to the Study of Tibetan’ (Tanggute xue si). The role of Tibetan translators for diplomatic correspondence within the Manchu Empire, as well as the question of which document prevailed between an original and a translation have not yet been fully studied. However, a reference in the eighth Dalai Lama’s biography, written by the tutor of the ninth Dalai Lama and regent of Tibet, would seem to clarify Wang Jiawei’s reference and enables an identification of the current jade pebble. The passage describes events taking place during the celebrations organised for the Dalai Lama’s birthday in the Water-Tiger Year 1782/3.

The Great Emperor Manjushri presented a golden edict and a seal which auspiciously arrived through his attendant Bayer Khenpo. A pleasant proclamation and a golden decree having the outward appearance of a precious gem, silk garments, and many other presents in large quantity were received.

This passage is of the utmost importance. It establishes that an imperial declaration written in golden letters had the shape of a precious stone or gem. The fact that the Tibetan inscription on the current lot matches that of the 1783 imperial document made of jade strongly suggests that this is the very piece. The Tibetan and Chinese sources succinctly presented here are supportive of the year 1783. This ‘gem case’ would have been offered as some kind of memorabilia and a duplicate of the Jade Edict.

In the 8th month [of the Water-Tiger Year], the lamas and officials of Sera Monastery prepared summer fumigation along the main avenue to pay their respect. All the monks and lay functionaries of the government, the [monks from] Namgyal Monastic College, myself the [8th] Demo from Tengye Ling, the lower officials from the Surkhang Family, and the religious dignitaries of Drepung Monastery were in charge of the fivefold offering celebration. The Muslim community of Lhasa presented a great variety of food and fruits towards the summer audience. Thereupon, an innumerable amount of lay and monastic onlookers spread along the road to rip the benefits of liberation by sight, while travelling to the Potala Palace. The ritual ceremonies for His Holiness were bestowed as usual. About five thousand two hundred lamas, officials, and members of the monastic congregation of Palden Drepung, and about four thousand eight hundred lamas, official, and monks from Sera Thekchen Ling routinely carried out the rituals and prayers. The Great Emperor Mañjuśrī presented a golden edict and a seal which auspiciously arrived through his attendant Bayer Khenpo. A pleasant proclamation and a golden decree having the outward appearance of a precious gem, silk garments, and many other presents in large quantity were received.

Sotheby’s is extremely grateful for the assistance of Yannick Laurent, Wolfson College, Oxford University, in translating the Tibetan and providing the research for this lot.