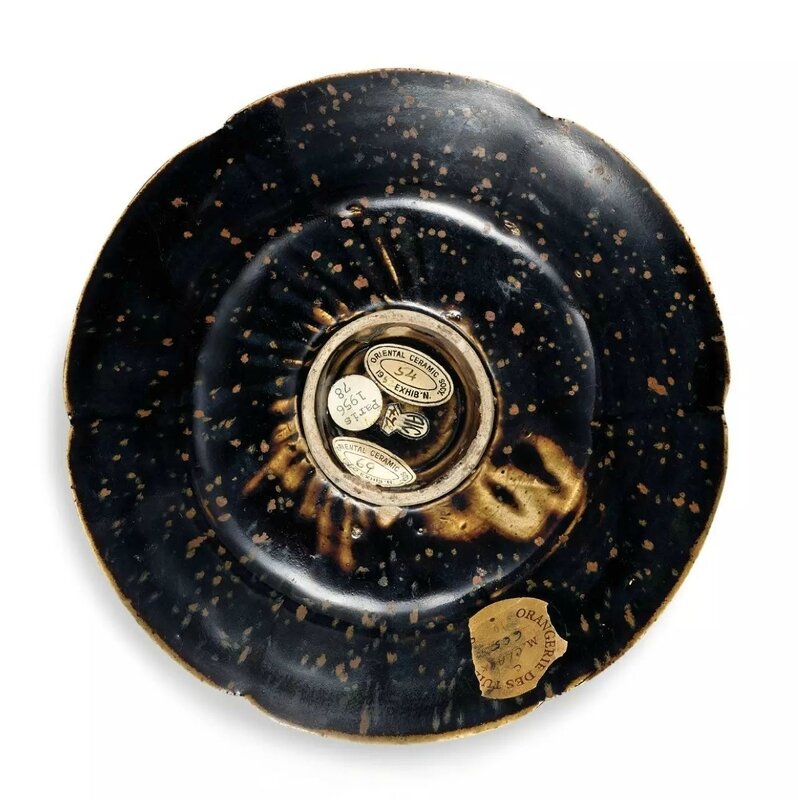 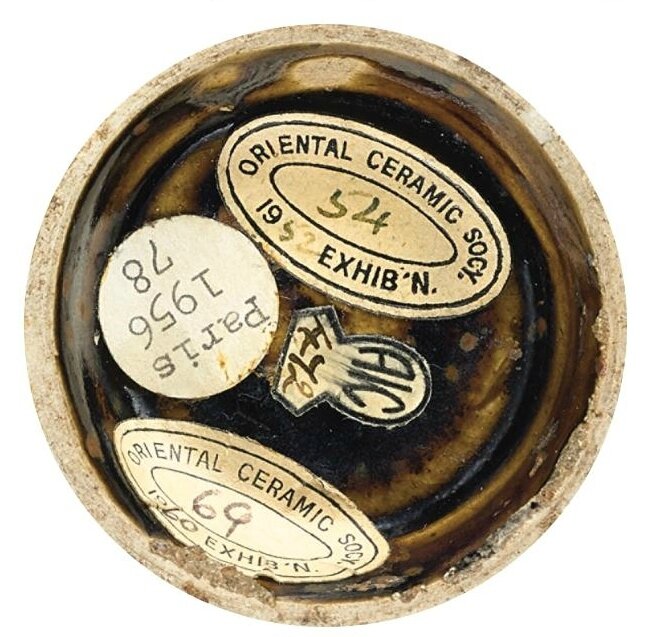 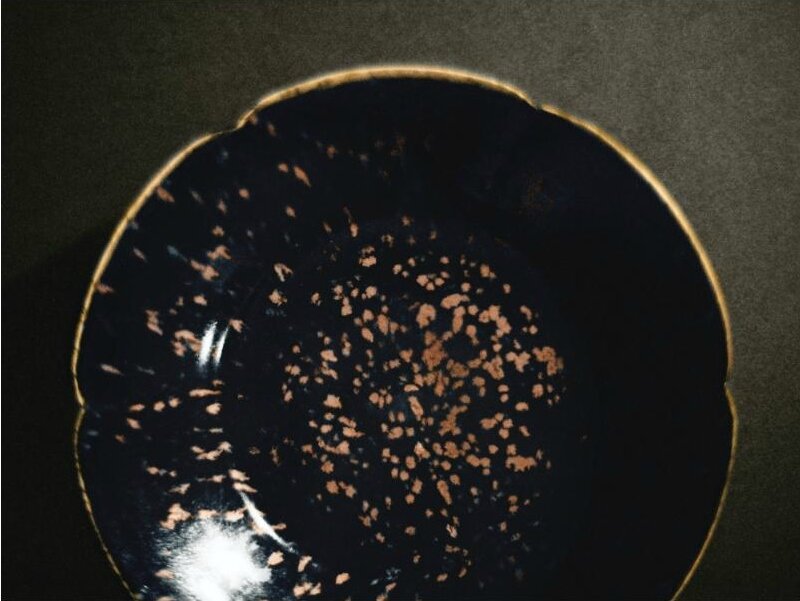 well potted with flaring sides rising to a six-lobed rim, all supported on a flattened base raised on a slightly splayed foot, covered overall save for the footring with a glossy black glaze liberally flecked with small irregular russet 'partridge feather' mottles, the glaze thinning to a pale mushroom colour along the rim and partially revealing the pale greyish-white body.

Highly impressive, with its captivating brown markings on a rich black glaze, yet elegant and graceful, its generous shape daringly raised on a narrow foot, this superb dish is unique. Although the six-lobed shape is not immediately associated with any particular bloom, this vessel evokes flowers of rare beauty such as the black hibiscus. Of exceptional quality, it is one of those exceedingly scarce Song (960-1279) black wares, that do not need to shy comparison with the finest contemporary white and green wares. This dish is so individual in style and execution that its precise attribution provides a challenge. Black wares were made by most north-Chinese kilns, but they often represented a minor by-product of a manufactory that was famous for a different production line, as was the case, for example, at the Ru kilns of Baofeng in Henan province. Only the Ding manufactories of Quyang in Hebei province are known to have devoted particular care to their black wares, and this was duly noted by connoisseurs like Cao Zhao, who records in the Ge gu yao lun [Essential criteria of antiquities], first published in 1388, “There are also purple Ting [Ding] and ink Ting wares, the latter as black as lacquer. Their paste, however, is white. Like white Ting pieces, they were also produced at Ting-chou, but are more expensive.” (Sir Percival David, Chinese Connoisseurship: The Ko Ku Yao Lun: The Essential Criteria of Antiquities, London, 1971, p. 141 and p. 306). Ding wares are the only northern black wares he mentions.

The present dish is extremely finely potted, its six-lobed flower shape, reminiscent of contemporary lacquer, created by cutting small triangular indents from the rim and generating faint radiating grooves outside (for a lacquer comparison see fig. 1, a dish from the collection of Sakamoto Gorō, sold in these rooms, 8th October 2013, lot 141). In ceramics, six-lobed dishes of this deep angled form have been recovered from the Zhanggongxiang kilns in Ru county, Henan, the only kilns known to have created pieces on a par and similar to Ru ware, but of which almost no examples are extant (see Ruyao yu Zhanggongxiangyao chutu ciqi/Ceramic Art Unearthed from the Ru Kiln Site and Zhanggongxiang Kiln Site, Beijing, 2009, pp. 87 and 100-102; and Lu Minghua, ‘Liang Song guanyao youguan wenti yanjiu [Research on questions relating to the official wares of both Song periods], Nan Song guanyao wenji/A Collection of Essays on Southern Song Dynasty Guan Kiln, Beijing, 2004, pp. 149, figs 8-12). 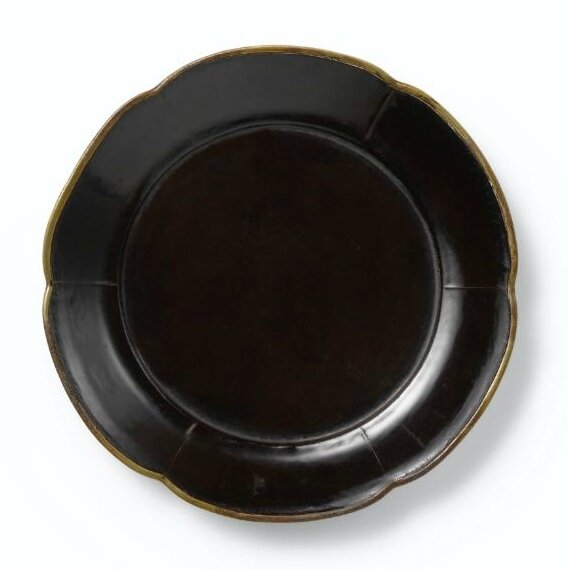 Although the six-lobed flower shape is well known from white and brown-glazed (‘purple’) Ding wares, most of these have a flat base without a foot (Ding ci ya ji. Gugong Bowuyuan zhencang ji chutu Dingyao ciqi huicui/Selection of Ding Ware. The Palace Museum’s Collection and Archaeological Excavation, Palace Museum, Beijing, 2012, pls 73 and 89). Those that do show this elegant angled shape, raised on a fairly narrow foot, have an unglazed rim on which they were fired (Ding yao bai ci tezhan tulu/Catalogue of the Special Exhibition of Ting Ware White Porcelain, National Palace Museum, Taipei, 1987, cat. nos 77 and 78). Nigel Wood writes about the present “fine northern blackware bowl” … “The non-vitrifying northern clays allowed more extreme forms than were possible with southern porcelains – such as this imitation of a lacquer dish, with its wide overhang above its foot. A similar form was used for some contemporary Ding wares, but these were fired rim down.” (Nigel Wood, Chinese Glazes. Their Origin, Chemistry and Recreation, London, 1999, p. 142). On the present dish the difference in diameter between the very small foot and the wide rim is more pronounced than on white Ding counterparts, or on similar shapes from southern kilns. One related persimmon-glazed dish was included together with the present dish in the exhibition Sōdai no tōji/Sung Ceramics, Idemitsu Museum of Arts, Tokyo, 1979, cat. no. 76.

No piece closely comparable to the present dish appears to have been published and vessels related in style and quality are not known from any ceramic workshops other than the Ding kiln group in Quyang. Of the already small number of black sherds excavated or recovered from the Ding kiln site, only very few are patterned with brown splashes, all apparently belonging to conical bowls. One fragmentary conical bowl shows a deep black glaze with similar brown markings as the present piece, but the glaze has been wiped away above the foot, which may be the reason it was rejected (fig. 2, Ding ci ya ji. Gugong Bowuyuan zhencang ji chutu Dingyao ciqi huicui/Selection of Ding Ware. The Palace Museum’s Collection and Archaeological Excavation, Palace Museum, Beijing, 2012, pl. 97, and Teiyō. Yūgu naru haku no sekai: Yōshi hakkutsu seika/Ding Ware. The World of White Elegance: Recent Archaeological Findings, Museum of Oriental Ceramics, Osaka, 2013, cat. no. 38). 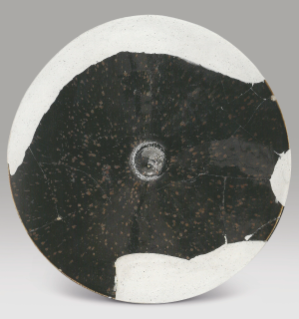 Sherds of another brown-splashed black-glazed bowl excavated at Quyang show larger dot-shaped markings, and a fragment of a conical bowl of lower proportion, closer to the present piece, but without lobes, is covered with a black glaze only (Zhongguo gu ciyao daxi. Zhongguo Dingyao/Series of China’s Ancient Porcelain Kiln Sites: Ding Kiln of China, Beijing, 2012, pls 129 and 128). Otherwise only a few smaller black sherds with brown splashes appear to have been published from the Ding kiln sites (Gugong Bowuyuan cang Zhongguo gudai yaozhi biaoben [Specimens from ancient Chinese kiln sites in the collection of the Palace Museum], vol. 2: Hebei juan [Hebei volume], Beijing, 2006, pl. 208).

Attributed to the Ding kilns has been a brown-splashed black bowl from the Eugene Bernat collection and later in the Manno Art Museum, Osaka, included in the Oriental Ceramic Society Jubilee Exhibition The Ceramic Art of China, London, 1971, cat. no. 71, pl. 48, and sold in our New York rooms, 7th November 1980, lot 91, and at Christie’s Hong Kong, 28th October 2002, lot 515 and illustrated on the cover; and another in the Arthur M. Sackler Museum, Harvard, Cambridge, included in the exhibition Hare’s Fur, Tortoiseshell, and Partridge Feathers: Chinese Brown- and Black-glazed Ceramics, 400-1400, Harvard University Art Museums, Cambridge, Mass., 1996, cat. no. 16.

A similar brown-splashed black bowl with a metal mount hiding the rim, in the National Palace Museum, Taipei, was included in the Museum’s exhibition Qianxi nian Songdai wenwu dazhan/China at the Inception of the Second Millennium: Art and Culture of the Sung Dynasty, 960-1279, Taipei, 2000, cat. no. IV-34, without attribution to any particular kiln.

Like Ding ware, the present dish is made from a near-white body material that shines through at the rim, where the dark glaze has drained to a transparent layer. Although the above pieces seem to be similar in material, they generally show a foot that is more neatly wiped free of glaze. No other major kiln centre is recorded to have created such wares but, like with most important Song manufactories, various kilns located around the type site – in this case Quyang – produced very similar wares, here, for example, the Jingxing kilns further south in Hebei. They equally made mainly ‘Ding’ white wares, but also a small number of black pieces, some with brown spots (‘Hebei Jingxingyao Hedongpo yaoqu/The Hedongpo Section of the Jingxing Kiln Site in Hebei’, 1998 Zhongguo zhongyao kaogu fujue/Major Archaeological Discoveries in China in 1998, Beijing, 2000, pp.87-92; and Gugong Bowuyuan cang Zhongguo gudai yaozhi biaoben, op.cit., pls 222-226).

Related bowls, clearly made in imitation of Ding and with the foot similarly wiped free of glaze, are also attributed to the Cizhou kiln group further south in Hebei province, see Hare’s Fur, Tortoiseshell, and Partridge Feathers, op.cit., cat. nos 34 and 35; but on these, the glaze seems to be more opaque, hiding the paler body also at the rim.

The present dish thus remains very difficult to attribute. Its body material clearly identifies it as a piece from a northern kiln, where at present the Ding kilns at Quyang or a related kiln nearby, represent the most likely origin. In the Southern Song period (1127-1279), this ‘partridge feather’ glaze pattern became a very popular decoration style at the Jizhou kilns in Jiangxi province, where the surface, however, was generally much less glossy. An unusually fine example of this type is the meiping from the same collection, also included in this sale, lot 15.

For around four decades, if not more, this dish belonged to Mr and Mrs Alfred Clark of Fulmer in Berkshire, England, west of London. The Clarks formed their fabled collection mainly between the 1920s and 1940s, before Alfred Clark’s death in 1950. Besides being active supporters of the Oriental Ceramic Society, Alfred Clark was directly involved in the preparation of the 1935/6 exhibition in London to which he lent five dozen pieces. Asked whose collection Sir Percival David considered most highly, Lady David in an interview in 1992 replied “I think the Clark’s”, “The collection, I would say, was one of the finest. It was small, formed by two people with extremely good taste…. They… had a little room upstairs in which they kept their Song pieces in showcases around the walls …” (Anthony Lin Hua-Tien, ‘An Interview with Lady David’, Orientations April 1992, pp. 56-63). The following decades the dish spent in no less elated company, in the fabled collection of the Idemitsu Museum of Arts, Tokyo, before entering the choice assembly of Song ceramics formed by the Portuguese collector Francisco Capelo.