BERLIN.- China and Europe are linked by a long tradition of reciprocal cultural exchange. These transactions were particularly intensive during the Qing dynasty (1644–1911), which is regarded as one of the key phases of Chinese cultural and political history. Exquisite gifts were exchanged. European envoys attempted to establish official trade relations with China. But their efforts were in vain, as the Chinese established trade barriers, with the exception of the port of Canton – although they were very much interested in European science, art, and culture.

The exhibition illustrates the richly varied nature of this mutual fascination in objects ranging in date between 1669 and 1907. Many of the almost one hundred pieces could be classified as Chinoiserie or so-called Europerie: they provide us with information about early modern European images of China and also allow us to trace the predominant images of Europe in China.

Highlights of the exhibition include impressive paintings, exquisite porcelain objects, a door from a wood-paneled room, as well as large-format photographs and copper engravings. The photographs and engravings show the ‘European palaces’ which Emperor Qianlong, who reigned from 1736 to 1795, had built in one of his parks. Today, only their ruins exist: British and French troops burned down the palaces and destroyed the extensive gardens during their 1860 Chinese campaign. Surprisingly, however, in this way they created a visual subject that was much-loved by European photographers after 1870.

Until now, the reciprocity – and sheer variety – of cultural exchange between China and Europe has hardly been appreciated or shown in an exhibition setting. The chosen objects offer impressive testimony to a longlived and mutual interest between the two cultures. In addition, they can help us understand how Europe’s conception of China and China’s conception of Europe changed over the course of 250 years. 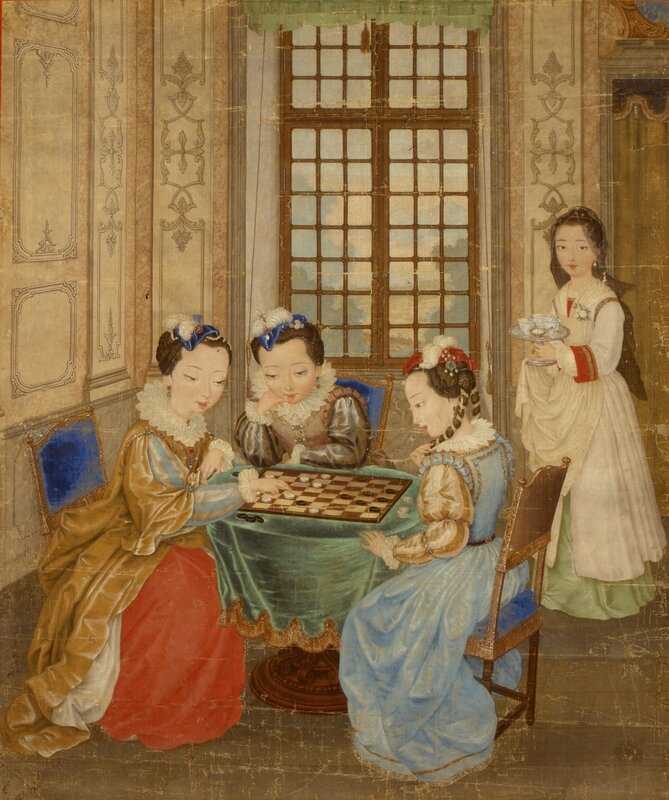 Exchanging Gazes
Particularly in the 18th century, it was not only Europe looking to China’s art production but also China looking to that of Europe. The fact that these exchanging gazes are to be taken quite literally and that they were cast back and forth now and again is demonstrated by the Chinese production of porcelain: around 1700, European missionaries living at the imperial court contributed to the development of the so-called foreign colours (yangcai). The chinaware that was subsequently decorated with the new shades of red and pink (famille rose) became so popular that it developed into an export hit and hence also had a lasting impact on European dining culture.

An exported plate, which was produced in China and shows two pilgrims on their way to Cythera, the island of love, allows the term ‘exchange of gazes’ to be connected more closely to the 18th century. In the European love discourse of that time, this term is connected with the concept of the love of souls. This type of love enables an encounter between lovers at eye level, yet it also involves the danger of unilateral self-reflection. Certainly this metaphor of love cannot be transferred unmitigatedly to the cooperation of cultures. Nevertheless, it points at two contradictory foundations of cultural exchange: such an exchange is only possible if, apart from differences, common features are recognized, for instance in the characteristics of systems of rule or in courtly cultures. At the same time, ‘exchange of gazes’ can allude to the fact that it is first and foremost one’s own self-interest that is respected in these constellations. 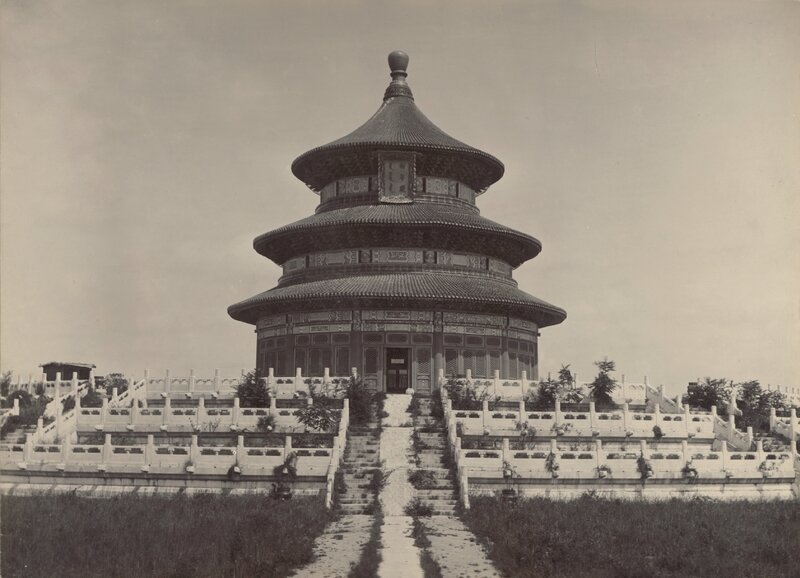 Between China and Europe
Due to political and economic changes, China and Europe had to repeatedly reconsider themselves, which means they had to come to a kind of self-understanding as well as set themselves in relation to each other. This becomes particularly evident when looking at objects called Chinoiseries, as they reflect the European image of China prevalent throughout the 18th century. Chinoiseries can be juxtaposed with the so-called Europeries, which were produced in China and give insight into the Chinese image of Europe. In order to present the foreign as alien, it had to be at least partially adapted to the familiar, which is why the objects exhibited here can be esthetically classed in-between China and Europe. Many objects can additionally be found ‘between’ China and Europe because they circulated as export goods, diplomatic gifts or as possessions acquired abroad, all in order to develop an altered effect in their respective new repositories. It is furthermore evident that motifs and techniques migrated not only between these cultures but also between genres and materials. Prints, for example, became built architecture and vice versa. The exhibition, moreover, offers the rare occasion to simultaneously view Chinoseries and Europeries, which are usually stored in different collections. This therefore allows the gaze to wander back and forth and, in so doing, to comprehend that China and Europe share a common history. Even though there are hardly definite dates that mark the history of exchange between China and Europe, the years in the exhibition’s title indicate two important stages in the European production of images of China. In 1669, Johan Nieuhof’s travelogue was published. Nieuhof had joined the first Dutch delegation of the United East India Company travelling to China in order to intensify the trade relationship with the empire that increasingly isolated itself – a venture which failed. From a historic point of view, the journey’s true success was Nieuhof’s richly illustrated travelogue that was published in large numbers and became one of the most important sources for European knowledge about China.

1907, on the other hand, marks the creation of four architectural photographs by Ernst Boerschmann, who travelled China as an architectural historian and re-established Western knowledge on Chinese architecture. This had become possible only because the major European powers had gradually forced the opening of China beginning in the second half of the 19th century. The objects exhibited here render not only the changing relationship between China and Europe from the late 17th to the early 20th century comprehensible – how and why it shifted in the direction of colonial policy – but also the traditional tendencies which persisted through these changes. Boerschmann, for instance, perpetuated the myth that porcelain was used as construction material, even though this was not his personal view.