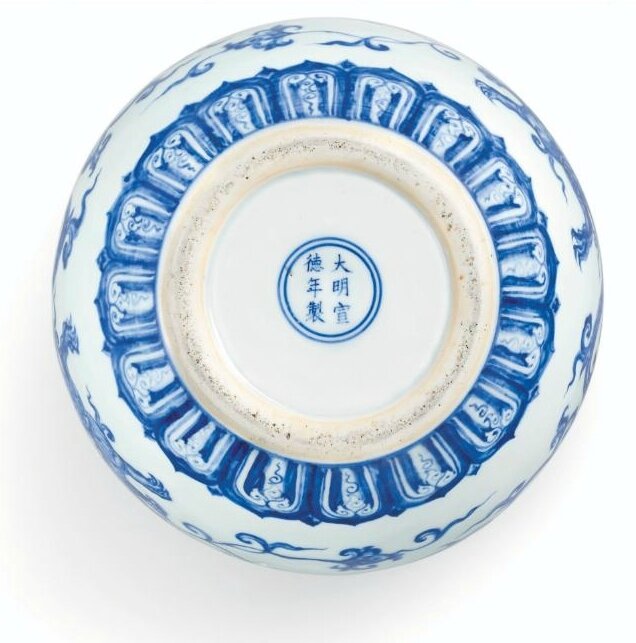 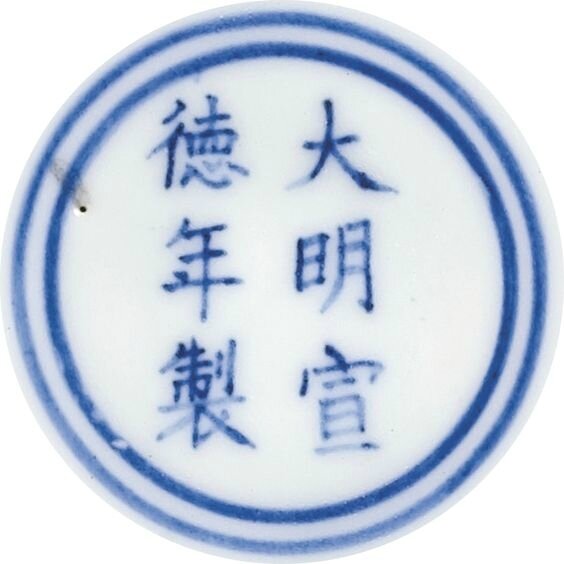 superbly potted with an ovoid body, rising from a low rounded foot to a straight neck and lipped rim, vividly painted in varied shades of cobalt blue, depicting two striding makaras, each with a winged sinuous body and a long bifurcated tail formed from stylised foliate scrolls, the muscular limbs each terminating into three sharp claws, its characteristic trunk-like snout curled upwards with mouth ferociously opened revealing sharp fangs and a pointed tongue issuing foliate blooms of lotus, the shoulder collared by ten leafy florets above a band of ruyi heads, echoed by a stylised band of ruyi enclosing trefoil motifs at the neck, the foot encircled by overlapping lappets, inscribed on the glazed countersunken base with a six-character reign mark within a double circle

An Imperial Jar with a Buddhist Connection
Regina Krahl

Chinese dragons come in a multitude of forms and appearances, of which the kui (or xiangcao, ‘sweet grass’) dragon depicted on the present jar is perhaps the most endearing manifestation. Although in a Buddhist context this motif was very popular in China in the early Ming dynasty (1368-1644), it remained very rare on Chinese porcelain and only four other jars of this type appear to be preserved, only one of them remaining in a private collection, but in a less good state of preservation.

The two dragons on this jar are charging ahead on two lion’s paws, their long trailing tails swirling up and down as they advance, a scrolling sprig of lotus floating ahead, issuing from their curled-up snouts. Dragons of this kind are derived from the Indian makara, a water guardian spirit used particularly as an architectural element to protect gateways. It arrived in China with the propagation of Buddhism just after the Han dynasty (206 BC – AD 220), but for centuries made only rare appearances, generally as a detail on Buddhist sculptures or temples reliefs.

From the Yuan dynasty (1279-1368) onwards, as Tibetan Buddhist iconography became more influential in China, the motif became more prominent and can be found, for example, on the famous reliefs around the gateway of the Cloud Terrace on the Juyongguan mountain pass of the Great Wall, outside Beijing. This platform, which was completed in 1345 and originally supported three white dagobas, is carved with Tibetan Buddhist imagery and inscriptions of sutra texts in six scripts and languages. A pair of makara dragons decorates the gate’s arch (fig. 1). In the reign of the Yongle Emperor (r. 1403-1424), who actively patronised Tibetan Buddhism, the motif was frequently used in thangkas featuring Buddhist deities. The kui dragons appear here in a similar place, in the gateway-like mandorla surrounding the main figure, their curling tails often hard to disentangle from the opulent ornamentation of the overhead arch; see, for example, the multi-coloured dragons on the ‘gate of light’ surrounding a figure of Yamantaka-Vajrabhairava in the famous embroidered silk thangka of this period in the Metropolitan Museum of Art, New York, included in the Museum’s exhibition Defining Yongle. Imperial Art in Early Fifteenth-Century China, New York, 2005, pl. 35, with further details illustrated in the catalogue, p. 60 and p. 87; and in the exhibition Ming. Fifty Years that Changed China, The British Museum, London, 2014, catalogue fig. 210 (fig. 2). 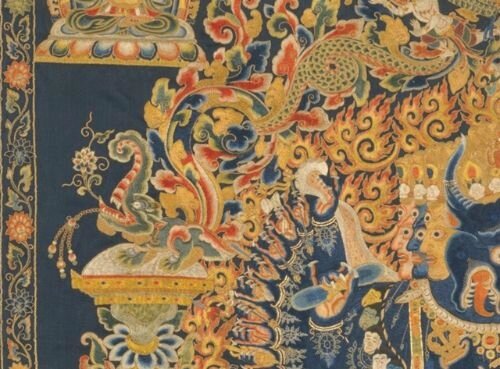 In the Ming dynasty, we see such Buddhist motifs also often on cloisonné enamel wares, although examples that can be dated with confidence to the early fifteenth century are rare. A bowl from the George Walter Vincent Smith Art Museum, Springfield, Mass., with a lotus scroll supporting the Eight Buddhist Emblems on the inside and kui dragons on the outside has been attributed to the early Ming period in the exhibition catalogue Cloisonné. Chinese Enamels from the Yuan, Ming, and Qing Dynasties, Bard Graduate Center, New York, 2011, p. 108, fig. 6.7 and no. 28.

The Xuande Emperor (r. 1426-1435), a diligent and conscientious monarch, whose reign was marked by peace and prosperity, was largely guided by Confucian ideas; yet at the same time he was much influenced by his grandfather, the Yongle Emperor. He thus continued and completed many of the Buddhist causes begun by his forebear, for example, the Da Baoen temple in Nanjing with its porcelain pagoda, whose construction spans both reigns. During his reign, Tibetan Buddhist motifs became more prominent in the repertoire of the imperial porcelain workshops at Jingdezhen, as blue-and-white pieces gradually replaced the monochrome white wares formerly preferred for ritual purposes. In addition to the ubiquitous lotus motifs, in form of floral scrolls or petal borders, we find motifs such as Buddhist lions, the Eight Buddhist Emblems (The Edward T. Chow ‘bajixiang’ bowl, lot 3301), and pearl clusters, Tibetan invocations, as well as Tibetan shapes, such as the monks’ cap ewer, now being produced in blue-and-white porcelain.

While in the Yongle period, large blue-and-white jars (guan) had largely still been made for export to the lands of North Africa, the Near and Middle East and Southeast Asia, in the Xuande reign they were generally inscribed with the reign mark and retained for imperial use or disposal. In China guan jars are known to have been used as wine jars, and three covered jars of similar shape, probably made of gold and raised on red lacquer stands, can be seen on a table laid with golden wine vessels in the handscroll Emperor Xuanzong at Leisure from the collection of the Palace Museum, Beijing, which depicts the Xuande Emperor enjoying performances of various games (see The Edward T. Chow ‘bajixiang’ bowl, lot 3301, fig. 1). The table further shows a wine ewer, a bottle, a covered bowl and a cup and stand, all placed in front of a table screen depicting a misty landscape. Jars of this type with Buddhist motifs may have been used for offering wine.

Blue-and-white porcelains with Buddhist-themed decoration appear, however, to have been manufactured in rather small quantities, and the makara dragon design was rarely used. Only four companion jars appear to have been published: foremost the jar in the Palace Museum, Beijing, which features in most Palace Museum publications, but differs in one peculiar aspect: it has an unglazed base with only the central area, covering the mark, being glazed; see The Complete Collection of Treasures of the Palace Museum. Blue and White Porcelain with Underglazed Red, Shanghai, 2000, vol. 1, pl. 100 (figs 3 and 4); another jar of this design in the National Museum of China, Beijing, is illustrated in Zhongguo Guojia Bowuguan guancang wenwu yanjiu congshu/Studies on the Collections of the National Museum of China. Ciqi juan: Mingdai [Porcelain section: Ming dynasty], Shanghai, 2007, pl. 29; a third piece, with a later cover, from the collections of Wu Lai-hsi, Major Lindsay F. Hay, Soame Jenyns and now in the Fitzwilliam Museum, Cambridge, published in B.S. McElney, ‘The Foliated Dragon’, The Bulletin of the Oriental Ceramic Society of Hong Kong, no. 1, 1975, p. 54, pl. 1, was sold twice in our London rooms, 26th May 1937, lot 37, and 16th June 1939, lot 97; and the fourth, included in An Exhibition of Important Chinese Ceramics from the Robert Chang Collection, Christie’s London, 1993, cat. no. 12, was sold at Christie’s London, 12th December 1988, lot 173. Another very similar unmarked jar was offered in these rooms, 30th October 2000, lot 103. For a variant of this design, unmarked and probably representing a Yongle predecessor, see a larger jar with somewhat different kui dragons and different designs around neck and shoulder, sold in these rooms, 16th May 1989, lot 112. and illustrated in Sotheby’s Hong Kong – Twenty Years, 1973-1993, Hong Kong, 1993, pl. 55; and Sotheby’s. Thirty Years in Hong Kong, Hong Kong, 2003, pl. 211; and another jar of that design but with remains of a Xuande reign mark, reconstructed from sherds discovered at the Ming imperial kiln site at Jingdezhen, illustrated in Gugong Bowuyuan yu Jingdezhen taoci kaogu xin chengguo. Ming Qing yuyao ciqi/The New Achievements on Ceramic Archaeology of the Palace Museum and Jingdezhen. The Porcelain of Imperial Kiln in Ming and Qing Dynasties, Beijing, 2016, pl. 130.

Jars of this form do not seem to be known with matching porcelain covers and may have been used together with covers of a different material. A set of a porcelain stem bowl with a silver stand and a gold cover dated in accordance with 1437 has come to light, for example, in the tomb of Prince Zhuang of Liang and his wife near Zhongxiang, Hubei province, see Liang Zhu, ed., Liang Zhuang wang mu/Mausoleum of Prince Liang Zhuangwang, Beijing, 2007, vol. I, pp. 76-80 and vol. II, pls 80 and 86.

Kui dragons, albeit of a somewhat different manifestation, also appear to have been employed to assure the water supply for the brush of the Xuande Emperor, who was a skilled painter and poet. The motif appears on two fragmentary water droppers recovered from the Ming imperial kiln sites, see Jingdezhen chutu Ming Xuande guanyao ciqi/Xuande Imperial Porcelain excavated at Jingdezhen, Chang Foundation, Taipei, 1998, cat. nos F5 and F6.