LONDON.- This autumn, one of the most celebrated paintings in the National Gallery, Jan van Eyck’s The Arnolfini Portrait, is being exhibited for the first time alongside works by the Pre-Raphaelite Brotherhood and its successors. Focusing on the profound influence this 15th-century masterpiece had on the Pre-Raphaelite Brotherhood, Reflections sheds light on the different ways these young British artists of the 19th century responded to the painting and one of its most distinctive features, the convex mirror.

Featuring key loans from Tate’s Pre-Raphaelite collection, including Sir John Everett Millais’s 'Mariana' (1851), Dante Gabriel Rossetti’s 'The Girlhood of Mary Virgin' (1848–9), William Holman Hunt’s 'The Awakening Conscience' (1853), and William Morris’s 'La Belle Iseult' (1858), the only completed easel painting he produced, this landmark exhibition provides a unique opportunity to view these paintings next to the work that inspired them. Co-curated by Susan Foister, Deputy Director and Curator of Early Netherlandish, German, and British Paintings at the National Gallery and Alison Smith, Lead Curator of British Art to 1900 at Tate, the exhibition shows a wide range of exhibits from public and private collections, including one of the convex mirrors owned by Rossetti (Kelmscott Manor, Gloucestershire, UK), another used by William Orpen (Private Collection), as well as early photographs (Wilson Centre for Photography), drawings, archival exhibits surrounding the acquisition of 'The Arnolfini Portrait', works on paper, and a Victorian reproduction of van Eyck’s masterwork 'The Ghent Altarpiece' by the Arundel Society (1868–71, The Maas Gallery, London).

Acquired in 1842, when the National Gallery was just 18 years old, 'The Arnolfini Portrait' captivated the Victorian audience, as is demonstrated in an article dedicated to the painting in 'The Illustrated London News'. At that time the work was a rare example of Early Netherlandish painting that could be seen in this country – to this day, the National Gallery remains the only UK public collection that holds works by Jan van Eyck. 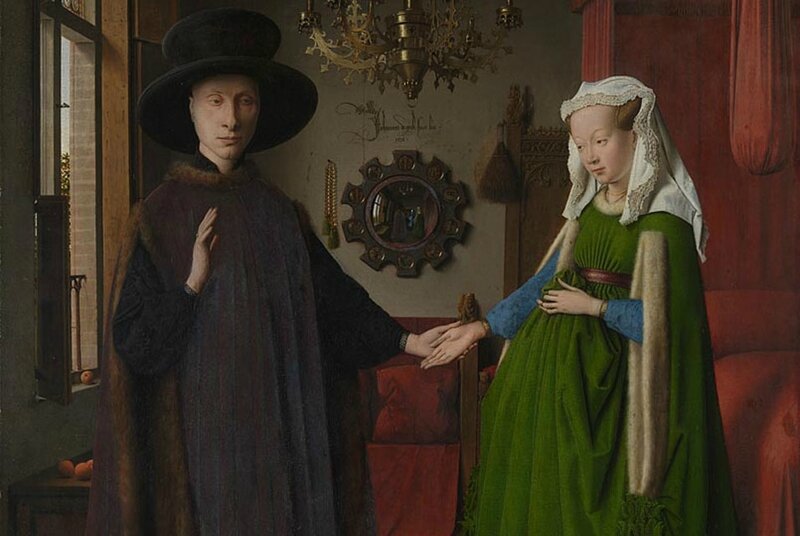 In 1848, disenchanted with the contemporary academic approach to painting they had been taught as students at the Royal Academy School of Art – which was at that time situated in the east wing of the National Gallery building in Trafalgar Square – a group of young artists founded the Pre-Raphaelite Brotherhood. The name reflected their preference for Late Medieval and Early Renaissance art that came ‘before Raphael’.

William Holman Hunt, John Everett Millais, and Dante Gabriel Rossetti all became fascinated with 'The Arnolfini Portrait' which hung just a few rooms away from where they studied. The refined oil painting technique and its use of a mirror inspired these artists to the extent that critics of the day dubbed the Pre-Raphaelites the ‘pre-Van Eycks’ acknowledging the transformative effect the picture had on their art and vision.

The convex mirror, which in 'The Arnolfini Portrait' famously shows a reflection of van Eyck himself, left a lasting impression on the Pre-Raphaelites. They adapted the device as a means of exploring ideas of distortion, doubling, and reflection, but also as a way to convey a complex psychological drama. The exhibition brings together paintings featuring this artistic device, including Hunt’s 'Awakening Conscience' (1853, Tate), which depicts a woman and her lover – here the mirror is used to reflect a view out of the window, an allusion to the woman’s possible redemption from a life of shame. Many of the Pre-Raphaelite Brotherhood’s paintings feature female figures in interior scenes that incorporate the mirror device, such as Rossetti’s 'Lucrezia Borgia' (1860–1, Tate) and Holman Hunt’s 'Il Dolce far Niente' (1866, Private Collection). 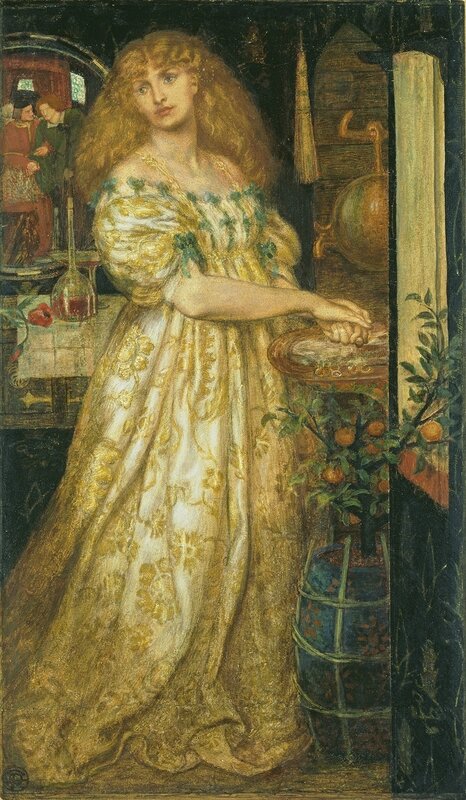 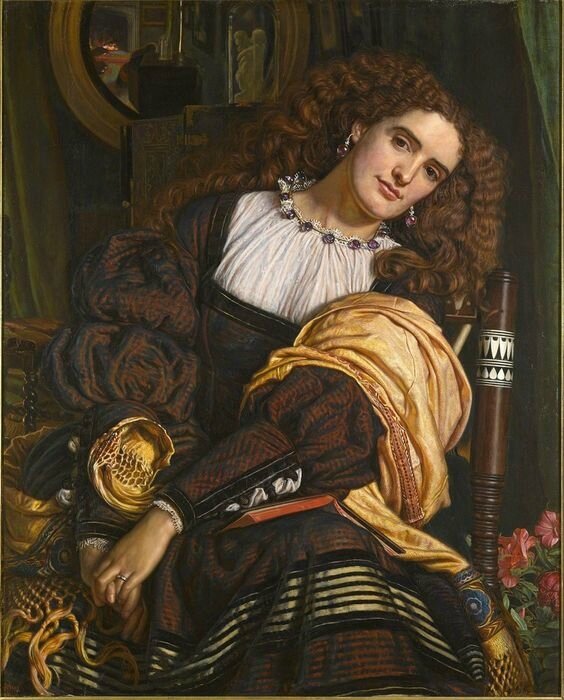 The Arthurian legend of 'The Lady of Shalott' captured the imagination of the Pre-Raphaelite Brotherhood, which became especially popular thanks to the poem of the same title by Alfred, Lord Tennyson. Depictions of the story in which the heroine is cursed to only look upon the outside world through a mirror, were frequent among Pre-Raphaelite painters, and 'Reflections' features interpretations by Hunt (about 1886–1905, Manchester City Art Galleries), John William Waterhouse (1894, Leeds Art Gallery), and Elizabeth Siddall (1853, The Maas Gallery, London). Other motifs from 'The Arnolfini Portrait' appropriated by the Pre-Raphaelites include a pair of pointed slippers in Hunt’s 'The Lady of Shalott' (1886–1905, Manchester City Art Galleries) and the hanging bed drapery and oranges in William Morris’s 'La Belle Iseult' (1858, Tate).

Morris was passionate about Early Netherlandish painting and in particular, van Eyck. He referenced the punning inscription on the frame of van Eyck’s Portrait of a Man (Self Portrait?), a possible self-portrait which entered the National Gallery Collection in 1851 and is displayed in the exhibition, which reads ‘Als Ich Can’ (As I can). Morris adapted this as: If I can and featured it in one of his earliest embroideries and even had it inscribed on the stained-glass window of his home, Red House, in Bexleyheath. In the 17th century 'The Arnolfini Portrait' belonged to the Spanish Royal Collection and is likely to have been seen by Velázquez providing inspiration for his monumental 'Las Meninas' (1656, Museo Nacional del Prado, Madrid). John Phillip’s Partial copy of ‘Las Meninas’, (1862, Royal Academy of Arts, London) depicts a cropped view of the Infanta Margarita and her maid of honour, and hanging above them is a rectangular mirror reflecting a double portrait of the King and Queen of Spain. 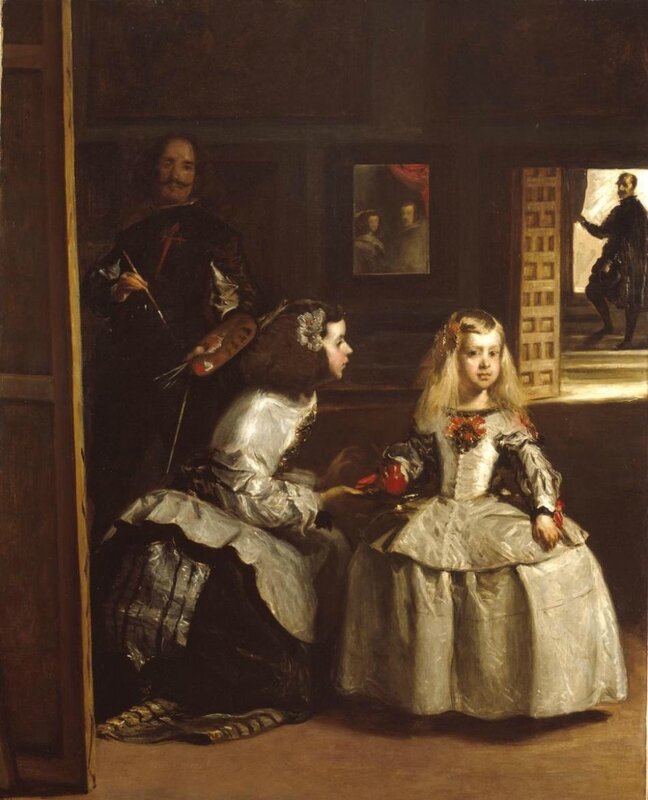 By the 1860s the original Pre-Raphaelite Brotherhood had disbanded as the artists began to diversify their individual interests, some adopting a more painterly style similar to Old Masters such as Velázquez. However, van Eyck’s convex mirror remained an important source of inspiration for the next generation of artists, including Mark Gertler, William Orpen, and Charles Haslewood Shannon. These artists continued to incorporate the mirror into their self-portraits and in domestic interiors well into the early 1900s, as seen in Orpen’s 'The Mirror' (1900, Tate) and Gertler’s 'Still Life with Self-Portrait' (1918, Leeds Art Gallery).

Co-curator of the exhibition Susan Foister says: “This fascinating story has never before been presented in an exhibition and needed extensive collaboration between two institutions, the National Gallery and Tate, to make it happen. It has been a real pleasure to work with co-curator Alison Smith, Lead Curator of British Art to 1900 at Tate, who first proposed the idea for this exhibition.”

Director of the National Gallery, Gabriele Finaldi says: “Van Eyck’s 'The Arnolfini Portrait' had a mesmerising effect on the young Pre-Raphaelites who saw it at the National Gallery. Fascinated by its truth to nature and its elegant symbolism, they brought about a revolution in British painting.” 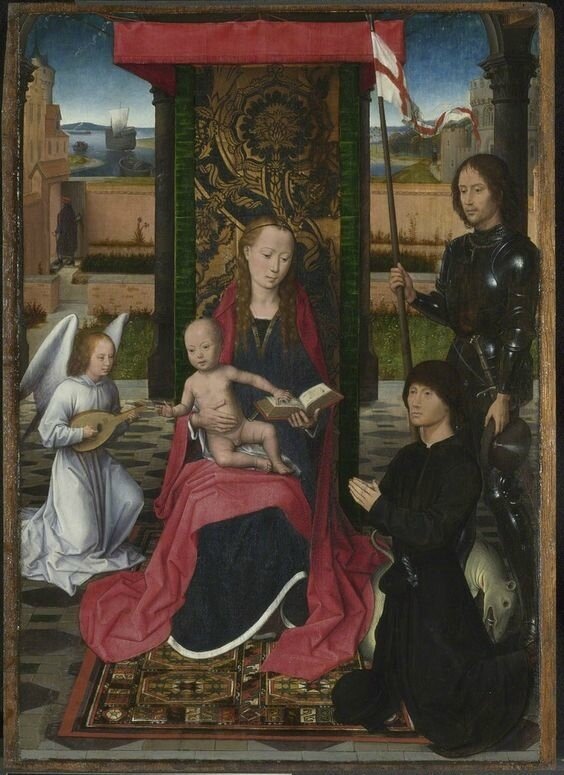