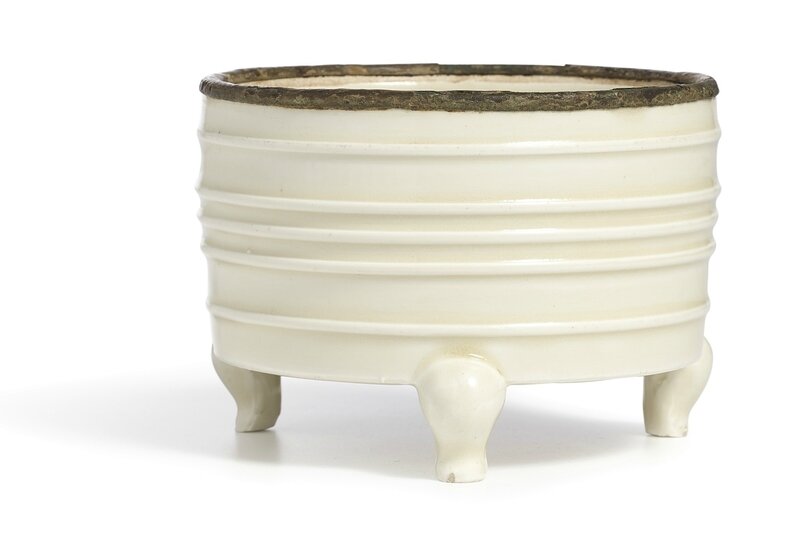 of archaistic lian form, well modelled with a cylindrical body supported on three short cabriole legs, the exterior of the body centred with three raised fillets, all between two further raised ribs, covered overall save for the unglazed rim with a translucent ivory-coloured glaze pooling on the underside, the rim mounted with a copper-coloured metal band with traces of malachite encrustation.

Note: Adapted from an archaic bronze form, this elegant censer reflects the major impact on the arts that resulted from a drastic political shift during the early Song dynasty, from a society ruled by a hereditary aristocracy to one governed by a central bureaucracy of scholar-officials selected through civil service examinations. The resulting rise of Neo-Confucian ideals emphasised the importance of history in the pursuit of virtue. The increased interest in antiquities led to a revival of archaic jade and bronze forms that Song potters adapted into their repertoire. The present censer finds its roots in gilt bronze tripod wine vessels (zun) of the Han dynasty (206 BC – AD 220), generally supported on bear-shaped feet, fitted with ring handles and supplied with a cover, such as an example decorated with animals, that is engraved with an inscription identifying it as a wine vessel (jiu zun) and dating it in accordance with the year 26 BC, illustrated in Li Xueqin, ed., Zhongguo meishu quanji: Gongyi meishu bian [Complete series on Chinese art: Arts and crafts section], 5: Qingtong qi[Bronzes], vol. 2, Beijing, 1986, pl. 217, together with another gilt-bronze wine zun with matching tripod stand in the Palace Museum, Beijing, pl. 236, which is decorated with a triple raised band in the centre and single bands at rim and base, not unlike the present piece, and attributed to the reign of Guangwudi, AD 25-57.

For ceramic incense burners, this shape was popular from the Song dynasty right through to modern times, and this Ding version with simple raised ribs, became a classic. Five similar Ding examples, in various shapes and proportions and with different arrangements of raised ribs, were included in the exhibition Gugong lidai xiangju tulu/A Special Exhibition of Incense Burners and Perfumers Throughout the Dynasties, National Palace Museum, Taipei, 1994, cat. nos 35-39, together with a roughly contemporary Jingdezhen copy, cat. no. 44, a later Dehua copy, cat. no. 67, and a ‘Guang ware’ copy, probably from Guangzhou, cat. no. 71, all from the collection of the National Palace Museum. Three of the five Ding censers in Taipei were also included in the exhibition Dingzhou hua ci. Yuan zang Dingyaoxi baici tezhan/Decorated Porcelains of Dingzhou. White Ding wares from the collection of the National Palace Museum, National Palace Museum, Taipei, 2014, cat. no. II-5.6.7, all with fitted wooden covers with Yuan (1279-1368) or Ming (1368-1644) jade carvings as knobs, a type known to have been commissioned by the Yongzheng Emperor (r. 1723-1735) from the palace workshops.

Another censer of this size, with two ribs near the mouth and also with a metal rim mount, from the Carl Kempe collection and illustrated in Bo Gyllensvärd, Chinese Ceramics in the Carl Kempe Collection, Stockholm, 1964, pl. 447, was sold in our London rooms, 14th May 2008, lot 238; another is illustrated in Hsien-ch’i Tseng & Robert Paul Dart, The Charles B. Hoyt Collection in the Museum of Fine Arts: Boston, vol. II, Boston, 1972, pl. 29; a larger example, in the Palace Museum, Beijing, is published in Selection of Ding Ware. The Palace Museum Collection and Archaeological Excavation, Beijing, 2012, pl. 41, together with a slightly smaller version excavated from Tomb 1 in Yangjiawan, Changsha, Hunan province, and now in the Hunan Provincial Museum, pl. 40; and another in the Tianjin City Art Museum, Tianjin, is published in Tianjin Shi Yishu Bowuguan cang ci/Porcelains from the Tianjin Municipal Museum, Hong Kong, 1993, pl. 26. Compare also a much smaller fragmentary example recovered from the Ding kiln site in Quyang, Hebei province, illustrated in Zhongguo gu ciyao daxi. Zhongguo Dingyao/Series of China’s Ancient Porcelain Kiln Sites: Ding Kiln of China, Beijing, 2012, pl. 108.

This ribbed tripod form was also adopted at other official kilns that produced wares for the court, for example, the Ru kilns in Baofeng, Henan province, see Wang Qingzheng, Fan Dongqing & Zhou Lili, Ruyao de faxian/The Discovery of Ru Kiln, Hong Kong, 1991, pls 59 and 66, for a piece from the collection of Sir Percival David, now in the British Museum, London, and one from the Palace Museum, Beijing; and at the Hangzhou guan (‘official’) kilns, see a piece in the National Palace Museum, Taipei, included in the Museum’s exhibition Gui si chenxing. Qing gong chuanshi 12 zhi 14 shiji qingci tezhan/Precious as the Morning Star. 12th-14th Century Celadons in the Qing Court Collection, National Palace Museum, Taipei, 2016, cat. no. II-2, where the author mentions, p. 67, related examples excavated from both the Laohudong and the Jiaotanxia kiln sites in Hangzhou.