seated in dhyanasana, the hands held in dhyanamudra set with a pricket formerly supporting a vase which is now missing, the face and body applied with a faint wash of iron-red enamel, the deity with serene facial expression and lowered eyes, the hair enamelled blue and falling over the shoulders in two curled tassels, the rest swept into a high topknot and secured by an ornamental jewel worn behind the five-leaf crown, further adorned with jewelled necklaces, armbands, bracelets, anklets and foot accessories, the shoulders draped with a billowing olive-green shawl wrapped around the lower arms, the dhoti with an outer layer decorated with gilt floral scrolls on an iron-red ground covering the back, revealing the bright yellow inner layer with red floral roundels, the underside of the figure inscribed with the number ten (shi), supported on a separately potted triangular lotus pedestal enamelled in pink with two tiers of stylised lotus petals against a turquoise ground, with the tips of the scarf falling over the front, the interior of the base inscribed with the number two (er).

Note: This finely carved figure can be identified as Amitayus, the deity invoked to cure illness and upon death for the hope of being transported to the world of Amitabha who resides in the Western Paradise. The adoration of brightly coloured deities has a very long tradition in Tibetan Buddhism and the wide colour range available in the famille-rose palette made porcelain an ideal medium to create such Buddhist figures. However, the making of such figures required the highest level of workmanship due to the complicated modelling and repeated firing necessary to achieve the perfect result. Hence the number of figures produced remained small and were mainly for the temples of the imperial palace precincts.

The adoration of brightly coloured deities has a long tradition in Tibetan Buddhism and the wide colour range available in the famille-rose palette made porcelain an ideal medium to create such Buddhist figures. Nevertheless, these figures remain extremely rare and it is likely that they were made on special commission.

It is rare to find these devotional figures with naturalistically toned flesh rather than gilt. There is an identically modelled and painted figure of slightly smaller size in the British Museum dated to the eighteenth century and donated to the museum in the nineteenth century by Sir Augustus Wollaston Franks (1826-1897). A closely related example was sold in these rooms, 29th October 2001, lot 606. Compare also a gilt-decorated figure, sold in our Paris rooms, 16th December 2010, lot 196. 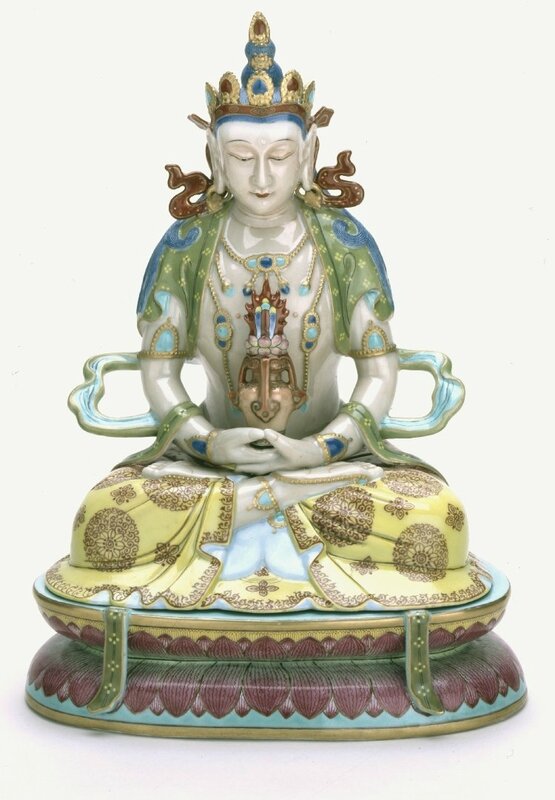