Note: The Fatimids mastered the carving of rock crystal in the tenth century, owing to their Caliphs’ abundant wealth which provided the means to commission such refined works. An impressive, although limited, corpus of remaining works which include ewers, flasks and chess pieces exhibits the exemplary skill of Fatimid craftsmen. This king or queen demonstrates both their affluence and the superior position they granted to the game of chess at this time.

The stylised, uneven foliate design separated by an etched border that decorate a chess piece in the Victoria and Albert Museum collections are remarkably similar to the designs of this present piece.  Furthermore, the first of two larger crystal chess sets are located in the Al-Sabah Collection, Kuwait (inv. no. LNS I Has-j, and published in Jenkins 1983, p.60). It comprises two kings or viziers, two bishops, two knights, a rook and three pawns from the renowned Ager chess set. The second, consisting of eight rock crystal chess pieces, is now in the Diocesan Museum in Orense, Spain. 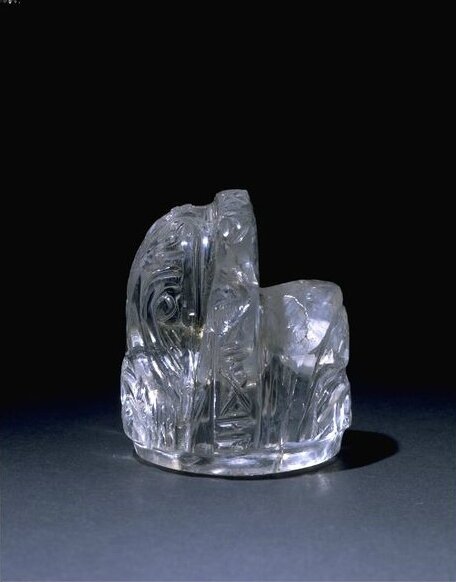 Rock crystal chess piece cut in form of two unequal lobes, curved at one end and flat at the other. The piece has a hole on top of the protuberance and was probably used as a reliquary. It is carved with the representation of two birds confronting one another, a band diapered with crosses and opposed scrolls. From the smaller lobe arises a pointed stem with projections resembling the stem of a lopped tree. On top of the object, there is a small hole about 0.5 cm deep.

This piece of rock crystal is carved as a chess piece, probably a king. In the Middle East the king originally showed the monarch riding on an elephant in full state. However, the shape soon became highly stylised, and its main distinguishing feature is its lack of symmetry front and back. This piece has a low, plain, recessed oval base. The main body has a rounded top and has been carved as three separate elements. A high band with a decorated upper surface separates two faces that curve outwards. The front shows a pair of birds confronting one another. They make a pattern that looks a little like an elephant's face. The back is much lower and is decorated with a pattern of leafy scrolls. It was damaged when a hole was drilled in the top. This may have happened when the king was re-used as a reliquary (a container for holy relics) in a Christian context. At some stage it was fitted with a tiny crystal finial in the shape of a lopped tree (not shown).