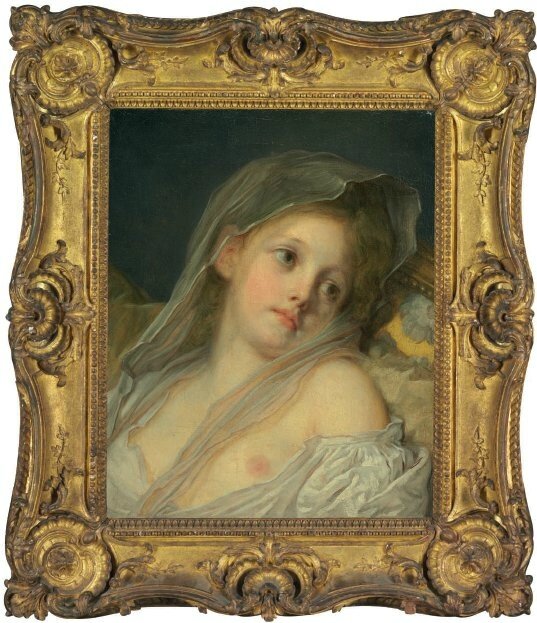 Note: This sensual image is one of several erotic depictions by Greuze of languorous and loosely clad young women reclining distractedly on daybeds which have since the 19th century acquired the title ‘The Dreamer’; others include an openly carnal image of the artist’s beautiful wife, Anne-Gabrielle Babuti that is known in two painted versions (one, private collection, Paris fig. 1; the other, the State Hermitage, St. Petersburg) and a red-chalk drawing (private collection, Paris). The present painting is more gently charged in its eroticism, however, and Greuze has depicted his lovely model in a more decorous state of rapture. Indeed, as Edgar Munhall first observed (op. cit.), the present painting is freely inspired by Rubens’s huge canvas depicting The Birth of Louis XIII (1622), part of the great cycle of paintings made for Marie de’Medici; now in the Louvre, the series was still installed in the Luxembourg Palace when Greuze (and his friend Johann George Wille) made copies of it in July 1760. Greuze transformed Rubens’s tender depiction of the queen gazing with maternal affection on her infant son, the future King Louis XIII, into, as Munhall noted, a more ambiguous “mixture of voluptuousness and reflection with which Greuze excited both his contemporaries and late-nineteenth-century collectors.”

Judging from its style – the creamy and subtly blended flesh tones and diaphanous gauze veil contrasting with the thicker, quicker strokes of paint employed to evoke the model’s draperies – the present painting probably dates from the mid- to late 1760s. It is not known for whom it was painted, but its first recorded owner was illustrious indeed: the Comtesse du Barry (1743-1793), official mistress of Louis XV and one of the most voracious art collectors of the day. The picture is clearly described in each of two sales of her collections organized after the death of the king and her exile from Versailles, and held to pay off her staggering debts. In the catalogue of the first sale of 22 December 1775 – which was cancelled before it took place – the present painting appears with an unidentified pendant, also by Greuze, of a girl in profile, as lot 22, where it was catalogued by Pierre Rémy as of a pretty girl, “seen in ¾ view, carelessly posed on a daffodil-colored canape, she has a gauze veil over her head and is wearing a chemise. The two paintings are very interesting; they are on canvas and measure 14 x 11 pouces.” In the second du Barry sale of 17 February 1777, catalogued by Alexandre Paillet, the painting appears – again with a pendant, though with the offer that they could be bought together or separately, as the buyer wished – where it is given the same dimensions and greatly praised as “a study, finished with a clever touch and the most beautiful color; it depicts a pretty girl, carelessly lying on a ‘lit de repos’, her head covered in a veil and her throat nearly bare."

Had Madame du Barry recognized in this refined and beautiful painting its debt to Rubens’s famous depiction of Marie de' Medici, a celebrated queen, she would have been delighted. The former milliner’s assistant who won the undying loyalty of Louis XV, Jeanne Bécu, Comtesse du Barry was installed at court for only five years (1769-1774), but it was during this period, with the royal coffers at her disposal, that she nearly bankrupted the crown, buying such a fabulous number and array of jewels, dresses, paintings, sculptures, and porcelains that Madame Vigée Le Brun observed that “seeing this opulence one might easily think she had been the mistress of a great many kings…”. The countess famously commissioned Fragonard to execute the series of paintings known as ‘The Progress of Love’ (The Frick Collection, New York) for her pavilion at Louveciennes, only to mysteriously reject it soon after its completion. However, her fondness for the paintings of Greuze was beyond dispute, and she commissioned or bought many of his finest works: apart from the present painting, and the sensitive portrait he painted of her (private collection), Du Barry owned at one time or another, La cruche cassée (1772-73, Louvre), Child Playing with a Dog (1769, Upton House, England) and Le Matelot Napolitain (1757, The Wallace Collection, London), among others. Her predilection for artworks that embodied love, eternal youth and fidelity was surely a projection of her own personality.

The painting passed to subsequent owners of equal esteem throughout the 18th century, having been acquired in the 1777 Du Barry sale by Charles-Louis de Beauchamp, the Comte de Merle (1723-1793), an Avignonnais aristocrat, diplomat, and French ambassador to Portugal, who was Joseph Vernet’s earliest patron; then to Joseph-Hyacinthe-François de Paule de Rigaud, Comte de Vaudreuil (1740-1817). Vaudreuil, son of a wealthy plantation owner in the French Antilles, secured his place in the French court through his love affair with the queen’s favorite, the Duchesse de Polignac, and his close friendship with the king’s youngest brother, the Comte d’Artois. He was the principal private patron of Vigée Le Brun – her portrait of him is one of the artist’s masterpieces (1784, Virginia Museum of Fine Arts, Richmond) – and commissioned important works from Vernet, Hubert Robert, and Jacques-Louis David (a reduced repetition of The Oath of the Horatii, today in the Toledo Museum of Art).