Provenance: With Grosvenor Antiques Ltd., London;
Acquired at the Grosvenor House Antiques Fair, London by the present owner in April 1972.

The Déjeuner des peintres Flamands conceived in 1818 was designed by Jean-Charles-François Leloy in his first years at Sèvres. A pencil and watercolour drawing design for one of the déjeuner’s cups survives in the Musée National de Céramique, Sèvres (fig. 1). The design, signed and dated 1818, shows that Leloy gave a choice of different motifs for the final ground pattern. It is interesting to note that the lozenge of artist’s tools shown in the design was omitted from the finished piece and is incorporated into the crested lip of the milk jug. 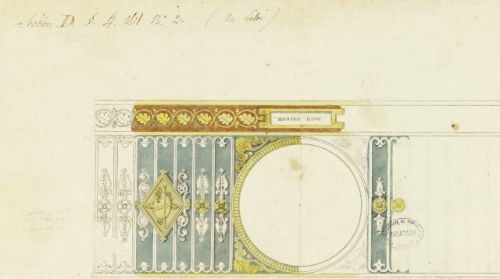 According to Van der Tuin letters from Sèvres were sent to the Comte de Forbin, Director of the Musée Royal, requesting permission for porcelain painters to study paintings in the Royal Collection.v Paintings were also sometimes lent to Sèvres for artists to copy. The study of Old Masters was well established by the 18th century, see F. B. Morse's painting Gallery of the Louvre, 1831-33, which shows a female painter working on a small-sized work. She sits in front of Rubens' Suzanne Fourment, which features on the sugar bowl of the present service (fig. 3). Works by the Flemish Masters were also copied onto large porcelain plaques including Van Eyck’s Virgin by Sophie de Bon in 1818, Carel Dujardin’s Wooded Grove by Pierre Robert in 1821 and Gerrit Dou’s Dropsical Woman by Jean Georget in 1822. The gilding of this déjeuner was completed by Charles Christian Marie Durosey (active 1800-30). Durosey also gilded the vases "Clodion" de Monsieur, one of the first models designed by Leloy at Sèvres.vi The Louvre exhibition.
In 1814 Alexander Brongniart obtained authorisation to reintroduce the annual exhibitions of the factory's latest products. They had been established at Versailles by Louis XV and continued by Louis XVI. When reinstated the exhibitions took place in the Galerie d’Apollon on the first floor of the Louvre, then known as the Musée Royal, and also included other luxury goods from de tapisseries des Gobelins, de Beauvais, des tapis de la Savonnerie, and de mosaïque de Paris faite. The déjeuner entered the sales inventory on 22nd December 1821,vii with a sale price of 3365 Francs. It was one of three déjeuner that were exhibited in the annual New Year’s L'Exposition des Manufactures Royales in 1822. As seen in the exhibition floorplan the present déjeuner was displayed in one of the window bays overlooking the Seine (fig.2).viii Brongniart and Leloy appear to have had a turbulent working relationship. In a letter dated 15th February 1844 Brongniart writes to the designer "You make too many small sketches of little significance which take you too long, that make the cost of executing your drawings too high… You use too much icy precision in drawings that should not have the dryness and exactitude of mechanical drawing."ix In spite of this Leloy was responsible for some of the most luxurious objects designed at Sèvres. His work attracted royal patronage; one of his earliest designs was a snuffbox casket for Louis XVIII (coffret de la tabatière du Roi), now in the Louvre Museum, INV.MS 214.x

According to Van Der Tuin’s article, a tray (plateau ovale) of the first size may have originally been intended to accompany the déjeuner. The author writes that it was painted by Fanny Charrin depicting Gerrit Dou’s Le Joueur de trompette sur fond de festin.xi Due to difficulties with the ground colour it was not delivered until later in 1822.xii It is interesting to consider this, as the cup in the present service depicting Gerrit Dou’s self-portrait was also painted by Charrin, suggesting artists specialised in, or preferred to copy particular Masters. It is possible  that the tray mentioned is the example which survives in the collection of the Musée national de Céramique, Sèvres.xiii

Platinum
Silver decoration was rarely used at Sèvres during the late eighteenth century,xiv however it soon oxidized and tarnished. To resolve this problem the factory sought a material which would keep its lustre. The first service using platinum decoration, reserved on a simulated black lacquer ground, ‘fond noir’, was ordered on 6th May 1791, described in factory records as ‘fond noir Chinois en ors de couleurs et platine, fleurs, émailés.’xv Particularly successful and early uses of platinum as a ground colour can be seen on the déjeuner painted with medallions simulating cameo, circa 1813, decorated by Antoine Béranger (active 1808-48), and Jean François Philippine (1771-1840) in the National Museum of Stockholm;xvi and the pair of vases fuseaux, circa 1814, decorated in the same manner by Béranger, in the Musée du Louvre.

The painters of this extraordinary déjeuner have imitated details in the portraits of the Louvre which would have only been visible to them as they sat in front of the paintings copying them, which would not have appeared on a print. This exceptional déjeuner marries the technical advances in design and pays homage to the skill of the painter, both past and present.

[i] In 1834 Ducluzeau painted this portrait again on a large porcelain plaque now in the collection of the Musée national de Céramique, Sèvres, collection no. MNC769.

[iii] According to Van Der Tuin’s article the cup depicting Ferdinand Bol’s portrait of the Mathematician, though unsigned, was also painted by Victorine Treveret.

[vi] The pair was included in the Exhibition of Manufactory works in 1818 and named so as they were acquired by Louis XVIII as a gift for his brother the Comte d’Artois. They are now in the collection of the Musée du Louvre, inv. nos. OA 11340, OA 11341.

[viii] A Sèvres porcelain guéridon painted by Moïsse Jacobber from the exhibition (no. 8 from the catalogue) was sold in Sotheby’s New York, 1st February 2013, lot 3. This guéridon flanked the Henri IV guéridon (now in the MNC, Sèvres), at the far end of the gallery.