NEW YORK – Just in time for the holidays, Sotheby’s Magnificent Jewels and Fine Jewels auctions will be held in New York on 5 & 7 December 2017. Both sales feature a wonderful variety of vintage and contemporary pieces by renowned houses including Van Cleef & Arpels, Tiffany & Co., JAR, and Harry Winston alongside significant gemstones of superlative quality. The Magnificent Jewels sale is led by an exquisite 5.69-Carat Fancy Vivid Blue Diamond Ring (estimate $12/15 million) and an extremely rare 110.92-Carat Round Diamond - the largest round diamond ever to be offered at auction (estimate $4.2/6.2 million). All works from both sales will be on public exhibition in our York Avenue galleries from 30 November – 7 December, highlighting our inaugural A Life of Luxury auction series. We welcome seasoned and aspiring collectors to visit us, speak with a specialist, and try on the entire selection. 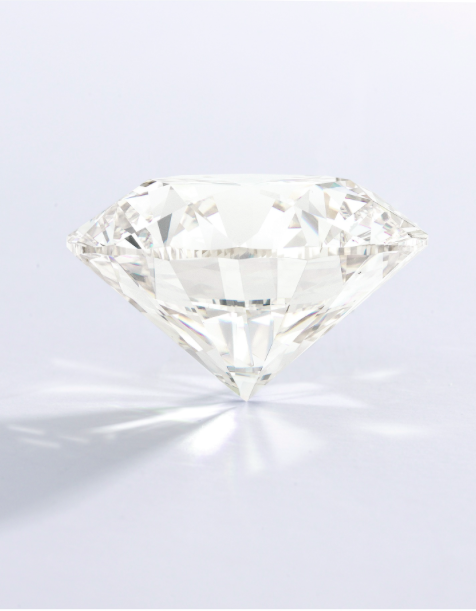 Accompanied by GIA report no. 2173606811 stating that the diamond is L, Faint Brown Color, VS1 clarity, with Excellent Polish, Cut and Symmetry.

Gary Schuler, Chairman of Sotheby’s Jewelry Division, Americas commented: “We’re thrilled to present supreme examples of the world’s most sought-after jewels and gemstones this season, led by the stunning Fancy Vivid Blue Diamond Ring and the 110.92-carat Round Diamond. Greatly admired for their rarity, these are gems that are enthusiastically pursued by collectors and connoisseurs.” Accompanied by GIA report no. 1186536856 stating that the diamond is Fancy Intense Orangy Pink, Natural Color, VS2 clarity. 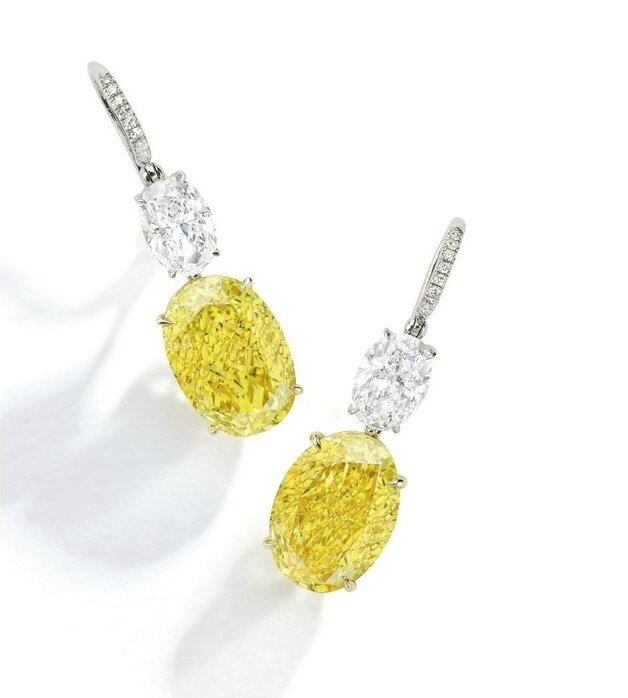 For those looking to add impressive colored stones to their collections, the Magnificent Jewels sale offers a variety of vibrant rubies, emeralds and sapphires, including an important group of sapphire jewels by Harry Winston and Van Cleef & Arpels from a Distinguished Family Collection. The bracelet by Van Cleef & Arpels, set with five spectacular sugarloaf cabochon sapphires, is a particular standout, with Art Deco pieces of this caliber being exceedingly rare. Further highlights from this incredible Collection include a rare pair of Burmese sapphire and diamond earclips by Harry Winston weighing 20+ carats each, a dazzling sapphire and diamond necklace-bracelet combination by Harry Winston and a 23.38-carat sugarloaf cabochon sapphire ring by Van Cleef & Arpels. 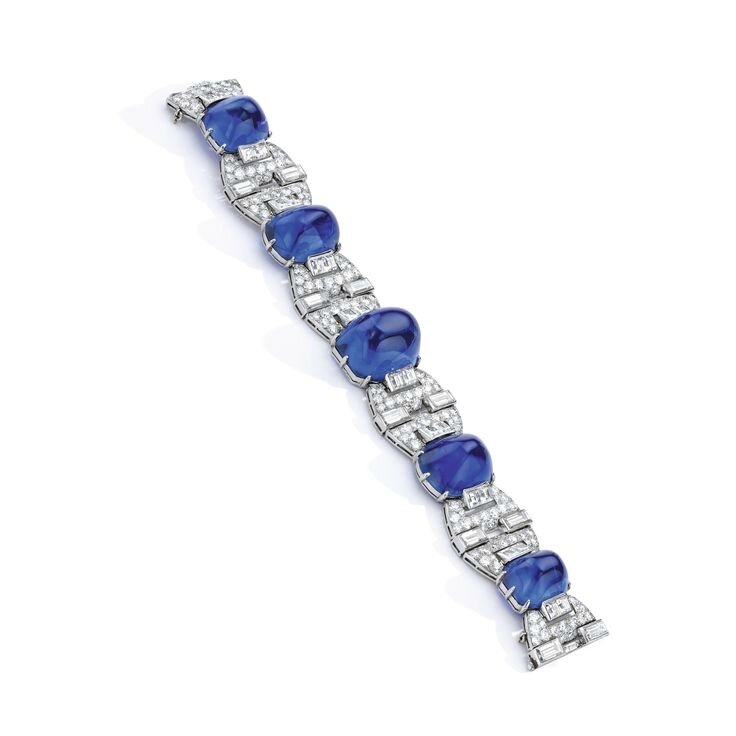 Accompanied by AGL report no. 1084702 A and B stating that the sapphires are of Classic Burmese origin, with no indications of heating. Of flexible, slightly graduating design, set with seven emerald-cut sapphires weighing a total of approximately 123.13 carats, completed by round and pear-shaped diamonds, length 16 inches, with maker's mark for François Tavernier, numbered A2383, the front detaches for wear as a bracelet, length 7¼ inches, with another detachable section, length 1½ inches, for variety of wear. With signed and fitted box. Accompanied by Gübelin report no. 17092008 stating that the ruby is of Burmese origin, with no indications of heating.

Accompanied by AGL report no. 1087600 stating that the ruby is of Burmese origin, with no indications of heating. Accompanied by AGL report no. 1087478 stating that the emerald is of Classic Colombian origin, clarity enhancement: minor, type: traditional.

Accompanied by Gübelin report no. 17092009 stating that the emerald is of Colombian origin, with indications of minor clarity enhancement.

ICONS: A CELEBRATION OF THE WORLD’S MOST COVETED JEWELS.

Catharine Becket, Head of Magnificent Jewels, New York commented: “This December, we’re pleased to present the inaugural Icons series in our Magnificent Jewels sale. The pieces to be featured possess a compelling variety of characteristics: rarity, authorship, provenance and, above all, iconic design. It is an ideal collection of our very own creation, one that represents connoisseurship and celebrates the best jewels and jewelers from the early twentieth century to today. Highlights include a classic double-headed diamond and onyx-studded panther bracelet by Cartier, a vintage ‘Serpenti’ watch by Bulgari, and masterfully-rendered brooch by JAR.” Note: Exotic, elegant, and powerful, the panther motif utilized by Cartier is perhaps one of the most easily spotted jewelry designs of all time. It was under Jeanne Toussaint’s leadership as creative director that the panther became a hallmark subject for the house in 1918. ‘Panthère’ would later become Toussaint’s own nickname, dubbed so by Louis Cartier himself. Toussaint’s chic and contemporary style helped the feline-inspired creations to flourish, with legendary jewelry collectors such as the Duchess of Windsor, Barbara Hutton and Princess Nina Aga Khan commissioning custom cats of their own.

Today the panther has become fully entrenched within the Cartier brand, with the felines themselves even making appearances alongside their jeweled counterparts in advertisements for the firm. The panther jewels display Cartier’s unmatched craftsmanship, with many of them moving with the distinct neatness of panthers in the wild. The bracelet offered here, for example, sleekly swivels to be placed on the wrist. Cartier has consistently evolved and reinvented the panther over the last 100 years, proving that icons can stand the test of time. Designed as a coiled serpent, the scales composed of gold tubogas links, the head and tail highlighted by round and marquise-shaped diamonds, further accented by marquise-shaped emeralds, with cabochon emerald eyes, the mouth opening to reveal a watch dial with baton indicators, mechanical movement, internal circumference 5½ inches, expandable, the dial signed Bulgari and Jaeger-LeCoultre, the caseback signed Bulgari, numbered 146634, with French assay and workshop marks; circa 1960s. With signed box.

This watch is similar in design to one in Elizabeth Taylor's Collection. Taylor's Serpenti watch is illustrated on the cover of Bulgari: Serpenti Collection by Marion Fasel.

As one of the oldest Italian jewelry houses dating back to 1884, Bulgari has a longstanding tradition of creating jewelry with the highest quality craftsmanship, utilizing the finest gemstones available.   During the middle of the 20th century Bulgari embraced the post-war dichotomy within Italian society – the desire to embrace a new, modern way of life as well as stay connected to Italy’s deep classical roots.  This ideal has carried forward to present day with Bulgari’s jewelry capturing the essence of Italian glamour for the contemporary woman.  In a 1963 article in Connaissance des Arts, art historian Evelyne Schlumberger affirms, “A Bulgari jewel is as recognizable as a Chanel suit.”

One of the most recognizable designs which Bulgari first introduced in the 1940s, is the tubogas “gas pipe” technique, which later developed into literal interpretations of the serpent in the 1960s.  Lot 312 is an exemplary serpenti bracelet-watch which highlights a serpent’s head perched atop the snake’s coiling body, opening to reveal a watch dial.   This piece captures the spirit and essence of the sophisticated and stylish jewelry collector, which Bulgari has long striven to embody.

Whether gifting to yourself or a loved one, our Fine Jewels sale has fashionable baubles for every price point, style and occasion. Featuring classic diamond rings, whimsical brooches and elegant dress sets by highly coveted makers such as Cartier, David Webb, Van Cleef & Arpels and Schlumberger, the sale truly has something for everyone on your list this holiday season. Notable lots include a 12.92 carat Diamond Ring mounted by Cartier (left, estimate $100/150,000), a Pair of Emerald and Diamond Earclips from the collection of Sir Sean and Lady Michelle Connery (estimate $50/70,000), and a Sapphire and Diamond Bracelet from Oscar Heyman & Brothers (estimate $35/55,000).

A LIFE OF LUXURY AT SOTHEBY’S NEW YORK

Following the launch of our exclusive Luxury & Lifestyle Division this past spring, Sotheby’s New York is holding an inaugural week of sales and events from 30 November to 7 December, during which we will offer the very best examples of Jewelry, Watches, Cars, Wine and Fashion.