DUBAI.- Tonight Sotheby's Boundless: Dubai sale achieved a total of $3.6m / £2.8m / €3.1m (pre-sale est. $2.6m – 3.6m) and a sell-through rate of 80%. Bidders in the room, on the phone and online competed to buy works spanning 20th Century and Contemporary Middle Eastern and International art, Design, Photography, Jewellery, Books & Manuscripts and Arts of the Islamic World. The sale offering attracted a broad span of regional and international participation, with 30% from the UAE alone. The top lot of tonight's sale was Ali Banisadr’s captivatingly explosive canvas In Media Res, an intoxicating mix of colour and exuberant brushstrokes inspired by elaborate Persian miniatures, was chased in an extended bidding battle by no less than six bidders to a final sum of $459,000 (est. $200,000-300,000).

Edward Gibbs, Sotheby’s Chairman for the Middle East said, ‘Tonight's strong sale result is testament to the exciting evolution of the market here in the UAE and the international focus that has reached an all-time high. The sale's offering was sourced internationally and united by the common thread of the appeal and influence of the Middle East across artistic disciplines and eras. Having seen the number of our UAE clients buying in our sales increase by over 80% in the last five years, tonight's sale here in Dubai saw us take the next step: as much as 30% of participants in sale were from the UAE. But of equal importance is our contribution to the market here by drawing international buyers, reflecting just how engaged the art world is with the region, as well as the extraordinary quality of the works.’

Ashkan Baghestani, Head of Sale said, ‘As part of this momentous week for the region, the enthusiasm that we experienced in the lead up to the sale for the range and quality of the works offered translated to strong participation. We saw as many as six bidders spanning the globe competing for a single work. This auction has been a voyage of discovery on a number of levels: for our clients in the region who have been introduced to international artists and new categories, and the connections we made with new collectors as a result of the sale's appeal globally, across generations and at all price points.’

Spending a considerable amount of time with the Bedouin people of the Algerian desert, Dubuffet became fascinated with rituals that reached outside the mainstream of the European art historical tradition. A rare example from the body of early works executed on his travels, Palmiers aux Bedouins was pursued by five bidders and sold above high estimate for $137,500 (est. $60,000-80,000). Painted in vivid colours, de Lempicka’s idealised portrait of a man wearing a white turban and traditional gold-rimmed robe, Indian with a Turban soared above estimate to bring $150,000 (est. $70,000-90,000). One of the most influential Italian artists of the twentieth century, Alighiero Boetti’s work engaged with the changing geopolitical situation of his time, much of it made on travels to Afghanistan where he began to work with local craftswomen to create colourful embroideries. Fuso ma non confuse from 1988, a jewel-like example of this project, sold for $31,250 (est. $18,000-25,000). 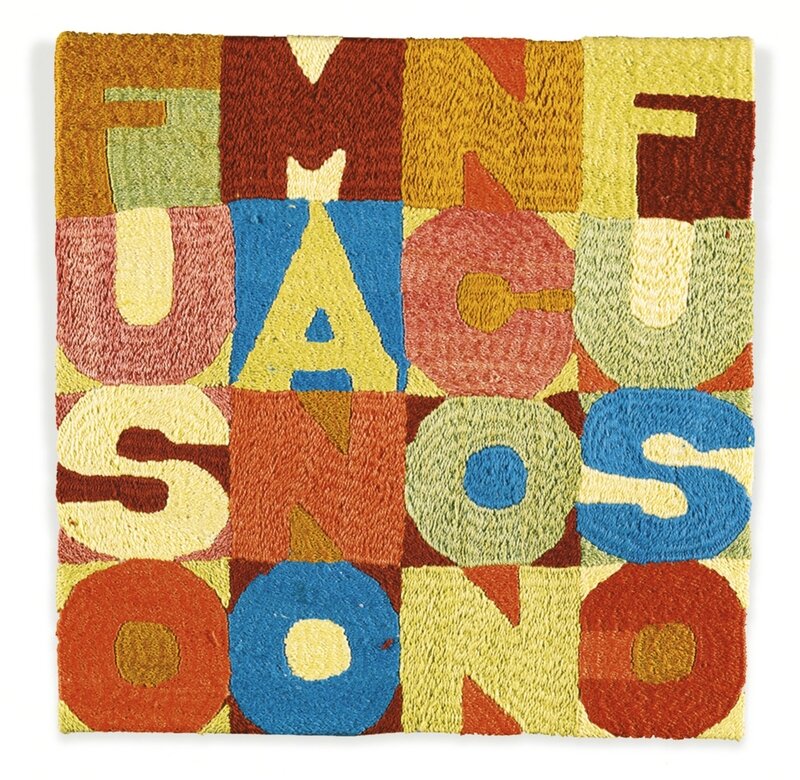 DESIGN
Testament to the growth of collecting as a way of life, the sale offered examples of the cutting-edge and timeless in 20th century and Contemporary Design. Zaha Hadid’s voluptuous and highly expressive Prototype Aqua Table from the 2005 Principal Collection (est. $7,000-10,000) met competition from four bidders, selling for double its pre-sale high estimate for $21,240 (est. $7,000-10,000). Three pieces by François-Xavier Lalanne from a prestigious private collection all exceeded their pre-sale estimates, to bring a combined total of $57,500 (est. $27,000-33,500). Cultivating the idea that art and aesthetic pleasure ought to be a part of everyday life, he married the fine and decorative arts whilst infusing his objects with his fixation with birds. The group was led by an avant-garde and whimsical take on a rocking chair, as Oiseau d’Argent, A Rocking Chair sold for $30,000 (est. $18,000-20,000). KHALIL GIBRAN
The last major collection of its kind, a previously unknown series of letters and works on paper by Khalil Gibran – one of the greatest novelists of modern Arab and American literature – was hotly contested and soared to a combined total of $183,750, three times the pre-sale high estimate (est. $42,000-54,000). Testament to his importance, each of these extremely rare objects sparked bidding battles and surpassed their estimates – led by a collection of thirty three letters written to his friend and patron Madame Marie Azeez El-Khoury, that fetched a sum more than three times the pre-sale high estimate, $100,000 (est. $24,000-28,000).

MODERN & CONTEMPORARY ARAB & IRANIAN ART
A seminal work by pioneering poet and painter Bahman Mohasses, a haunting and powerful painting of a contorted figure from 1966 sold above estimate for $375,000 (est. 80,000-250,000). Iranian American abstract expressionist Manoucher Yektai’s Portrait of Mrs Homa Vakil Mansour – one of the earliest portraits by the artist to appear at auction, depicting the wife of the Ambassador of Iran to the United Nations and the Vatican –sold for $81,250 (est. $65,000-80,000).

One of the earliest works by Mayo ever to appear at auction, the luminous Ismailia – an amalgamation of the artist’s Egyptian origins merged with the French style of the 1930s – soared above estimate and sold for a record price for the artist of $100,000 (est. $30,000-40,000). • The first lot of the sale was sought after by six determined bidders and soared to over four times its pre-sale high estimate. English-speaking footage of the pilgrimage to Mecca, from a documentary directed by Marcel Ichac in 1948 opened the sale to sell for $62,500 (est. $10,000-15,000).

• Ahmed Mater’s Artificial Light (From the Desert of Pharan series) sold for $65,000 (est. $30,000-40,000). Shedding light on urban life in Saudi Arabia, his work chronicles how globalization has transformed the holy city. 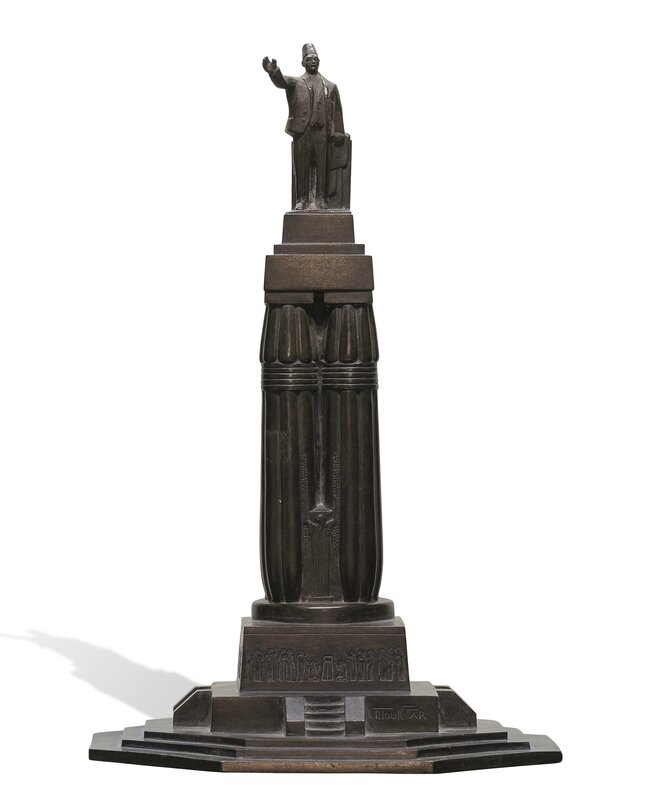 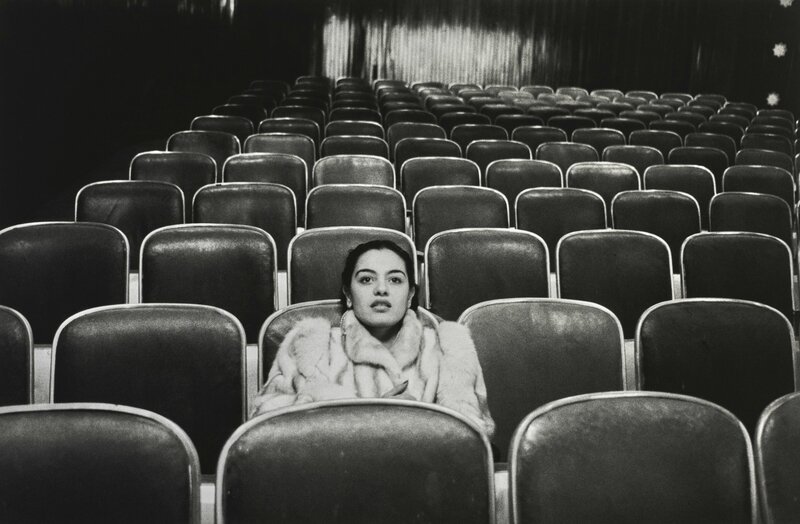 • Appearing at auction for the first time, a benchmark price was achieved for Milad Mousavi when his Against Procrastination fetched $1,375 (est. $1,000-2,000).