Duchess of Berry's Colombian emerald and diamond necklace and a pair of earrings, first half of the 19th century

Duchess of Berry's Colombian emerald and diamond necklace and a pair of earrings, first half of the 19th century Note: The Duchess of Berry is one of the most famous and fascinating aristocrat figures of the 19th century, who led an adventurous and courageous life in the turmoil of French politics. 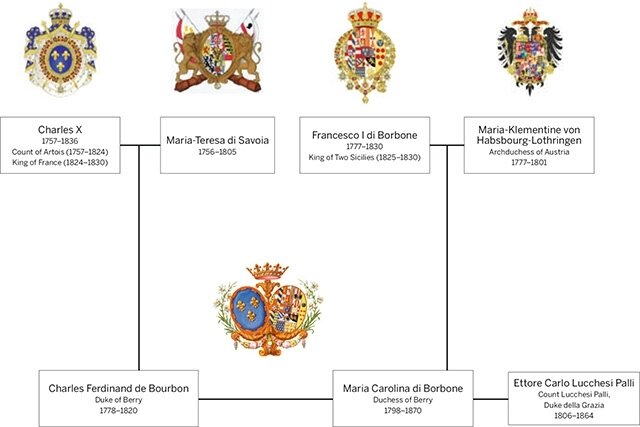 Family tree of the Duchess of Berry. Courtesy Sotheby's.

Born Marie-Caroline of Bourbon-Two Sicilies (5 November 1798 – 17 April 1870), the eldest child of Prince Ferdinand, the future King Francis I of the Two Sicilies, and Archduchess Maria Clementina of Austria, she married on 24 April 1816 in Naples, Charles Ferdinand, Duke of Berry, King Louis XVIII of France’s nephew, son of the future King Charles X, great grandson of King Louis XV. The Duke and Duchess of Berry lived at the Elysée Palace in Paris and had four children, only two of them survived: Louise Marie Thérèse, future Duchess of Parma, and Henri.

The Duke was assassinated in 1820 while the Duchess was pregnant with their fourth child, Henri, Count of Chambord (1820-1883), dubbed the ‘miracle child’, as his birth continued the direct Bourbon line of King Louis XIV of France. He became the heir to the Throne of France and his mother was an important figure in the politics of the Bourbon Restoration.

In 1824, Louis XVIII died and was succeeded by his brother, Charles X, the widow Duchess’s father-in-law.

In the July Revolution of 1830, Charles X was overthrown. Both Charles X and his elder son abdicated. Their cousin, Louis-Philippe d’Orléans, allowed the National Assembly to declare him king and he became ‘King of the French’. The Duchess of Berry did not accept her son’s exclusion from the Throne of France and she declared her son to be the legitimate King of France and herself regent. In 1831, she returned to her family in Naples. There, with the help of the Viscount de Saint-Priest, she brought about a legitimist rebellion to restore her son Henri to the throne.

On 14 December 1831, she secretly married Ettore Carlo Lucchesi-Palli, Count Lucchesi-Palli, Duke della Grazia (1806-1864), son of Antonio Lucchesi Palli, Prince di Campofranco, Duke della Grazia, and Maria Francesca Pignatelli. In June 1832, in Vendée and Brittany, she succeeded in instigating a brief but abortive insurrection. She was betrayed to the government in November 1832 and imprisoned in the Château of Blaye. During her incarceration, she gave birth to a daughter and her marriage was revealed. She thus lost the sympathies of the Legitimists and because of her remarriage to an Italian aristocrat, she was ineligible to serve as a regent of France. She was no longer an object of fear to the French government which released her in June 1833.

In 1844, the Duchess purchased the beautiful palazzo Ca’ Vendramin Calergi, on the Grand Canal in Venice.

As a patron of the arts, she was an enthusiastic collector, with passions for music, botany, garden design and literature – her library in the Château de Rosny was legendary. She was also known to patronise Sèvres porcelain, and commissioned numerous notable works throughout her life.

Commentaires sur Duchess of Berry's Colombian emerald and diamond necklace and a pair of earrings, first half of the 19th century