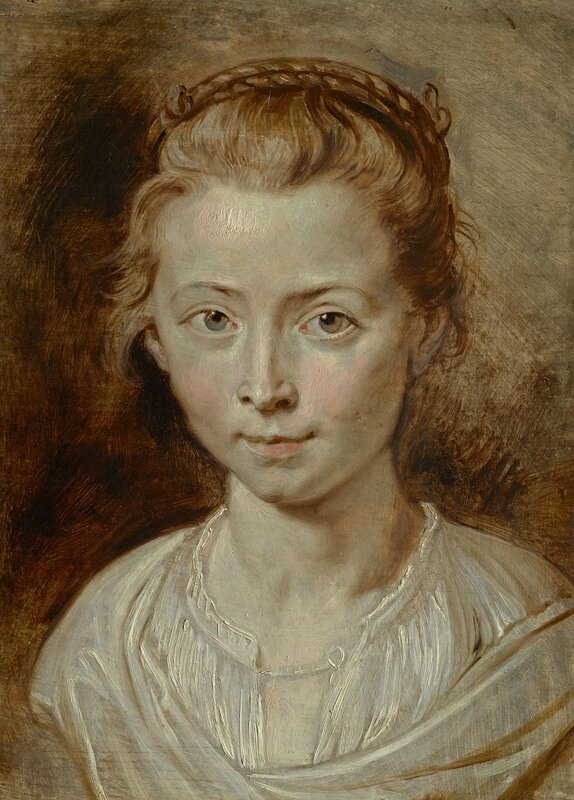 EDINBURGH.- A beautiful and intimate family portrait by one of the greatest of all seventeenth-century artists is on display at the Scottish National Gallery in Edinburgh this winter. Portrait of the Artist’s Daughter, Clara Serena by Sir Peter Paul Rubens (1577-1640) was probably painted about 1623, not long before the sitter’s tragically early death at the age of 12. This charming painting, which, after cleaning, has only recently been unanimously accepted as being by Rubens, has never before been shown in the UK.

Rubens was an extraordinarily talented artist, scholar and diplomat, who enjoyed a long, prolific and internationally successful career. He is renowned for painting allegories, Biblical subjects and scenes from classical mythology on a grand scale, employing many assistants to meet the intense demand for his work. However, he also created smaller self-portraits, and portraits of friends and family, sometimes using his wife and children as models for figures that appear in his grand narrative pictures.

Clara Serena was the eldest daughter of Rubens and his first wife Isabella Brant, to whom he was deeply devoted. Little is known about her short life: she was baptised in Antwerp on 21 March 1611, and we can deduce that she must have died in the autumn of 1623, as one of Rubens’ friends wrote a letter of condolence on 25 October of that year.

Until 2013 Portrait of the Artist’s Daughter, Clara Serena was in the collection of the Metropolitan Museum of Art in New York, where it was believed to have been by a follower of Rubens. It was de-accessioned by the Museum and subsequently sold at auction to a private collector. Following the removal of layers of discoloured varnish and overpaint, experts are now convinced that this tender portrait, with its carefully painted head and more sketchily painted chemise and background, is indeed by Rubens.

The artist had painted a famous and very touching portrait of Clara Serena at the age of five (now in the Liechtenstein Collection, Vienna), in which the disarmingly direct gaze of the child suggests a close and loving relationship to her father. Experts now agree that the portrait on show in Edinburgh shows the same child some years older, most likely around the age of twelve. The freshness and immediacy of the girl’s likeness suggests that Rubens painted this deeply personal picture from life, not long before his daughter died.

Isabella Brant survived her daughter by a mere three years. In 1630, Rubens married Helena Fourment. The artist continued to portray his family members and to use them as models for his figure paintings. For the two months of this display, Clara Serena will appear close to an image of her younger, half-brother Frans, who features as a servant-boy in the magnificent ‘Feast of Herod’, hanging nearby.

Portrait of the Artist’s Daughter, Clara Serena was one of the stars of Rubens in Private, an exhibition at the Rubenshuis in Antwerp in 2015, which examined the significance of the artist’s portraits of his family. The painting is currently on long-term loan from a private collection to the Rubenshuis and has been generously loaned to the National Galleries of Scotland for this short while.

Speaking of the display, Tico Seifert, Senior Curator for Northern European Art, said, “We are delighted to present Portrait of the Artist’s Daughter, Clara Serena, one of the most intimate and enigmatic portraits Rubens painted of a family member. This deeply personal picture is likely to have been painted ‘from life’, not too long before Clara Serena died. I am sure this little gem will resonate with our visitors and inspire their imagination. The portrait has never been shown in Scotland before and we are grateful to the owner for generously lending it to the National Galleries".
Posté par : Alain Truong à 20:56 - Art du XVIIème siècle/17th century art - Commentaires [0] - Permalien [#]
Tags : about 1623, Portrait of the Artist’s Daughter Clara Serena, Sir Peter Paul Rubens