Delicately painted in brilliant tones of cobalt blue at the central medallion with gnarled branches of finger citron, pine and plum blossoms, encircled by a ruyi-head border reserved on blue ground with a further similar band below the rim, the exterior inscribed with a poem composed by the Jiaqing Emperor written in kaishu, dated to dingsi year of the Jiaqing's reign with two mock seals of Jia Qing, enclosed by two ruyi-head borders, box.

Note: This Imperial poem was composed by the Jiaqing Emperor in the tenth month of the second year of the Jiaqing's reign corresponding to 1797, and can be translated as follows:

'Fine tea is the first batch of leaves dedicated to the emperor,
the morning drink has to be the moon-shaped (compressed) tea cake.
Adding new fire to the bamboo stove,
it boils like rushing waves.
Tea leaves flutter like fish and crab eyes,
gathering like the shadows of banners and spears.
A bowl of tea clears the mind,
and keeps away the morning chills.'

Followed by the two seal characters 'Jia' and 'Qing'.

While the same poem also appears on other porcelain tea wares of the Jiaqing period such as teapots and tea trays, it is very rare to find a blue and white tea bowl such as the present lot. Compare, however, an iron-red-enamelled tea bowl of the same design, Jiaqing seal mark and of the period, in the Qing Court Collection, illustrated in The Complete Collection of Treasures of the Palace Museum: Miscellaneous Enamelled Porcelains Plain Tricoloured Porcelains, Shanghai, 2009, pl.32; and see another example in the Art Gallery of New South Wales, Sydney, museum no.337.2001. 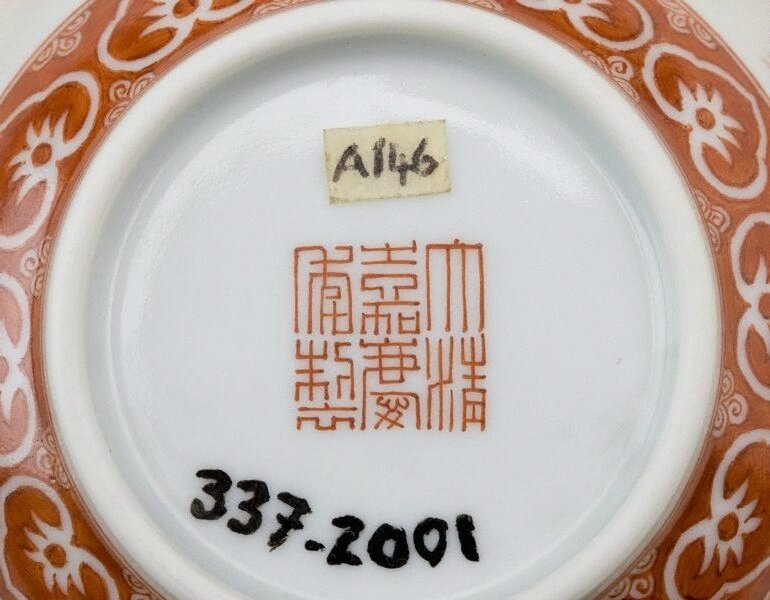 In form and design the tea bowl is in direct continuation from the Qianlong period. During the first four years of the Jiaqing reign, the Jiaqing Emperor was emperor only in name as the Qianlong Emperor, who became a Taishang Huang(the Emperor Supreme), retained the ultimate power until his death in 1799. Therefore, porcelain wares inscribed with a cyclical date of dingsi year of the Jiaqing reign can be considered as a product of the late Qianlong period; see The Far-Reaching Fragrance of Tea: The Art and Culture of Tea in Asia, National Palace Museum, Taipei, 2015, p.174.

The combination of the pine tree, plum blossom and finger citron is known as sanqing (the Three Purities) and is the subject of a poem composed by the Qianlong Emperor in 1746 titled San Qing Cha (Three Purities' tea), which has been copied on tea bowls from which the emperor is said to have drunk sanqing tea. Similar to the present bowl, the Qianlong one is similarly decorated with the Imperial poem bordered by ruyi-heads, with the interior also painted with a medallion consisting of a pine tree, plum blossom and finger citron; see, the National Palace Museum, Taipei, ibid., pp.161-162, pl.I-66.

The Qianlong and Jiaqing Emperors shared a personal enjoyment of tea-drinking, a pleasure which they deemed worthwhile commenting upon and even more so, recording it when commissioning special tea wares decorated with this design. However, the Jiaqing Emperor's poem and tea wares of this design should also be seen in the light of his father's old age and the son's wish to capture a mutual, yet transient, shared delight.

A related pair of famille rose inscribed bowls and covers, Jiaqing dingsi cyclical date corresponding to 1797 and of the period, was sold at Christie's Hong Kong, 30 May 2012, lot 4001.