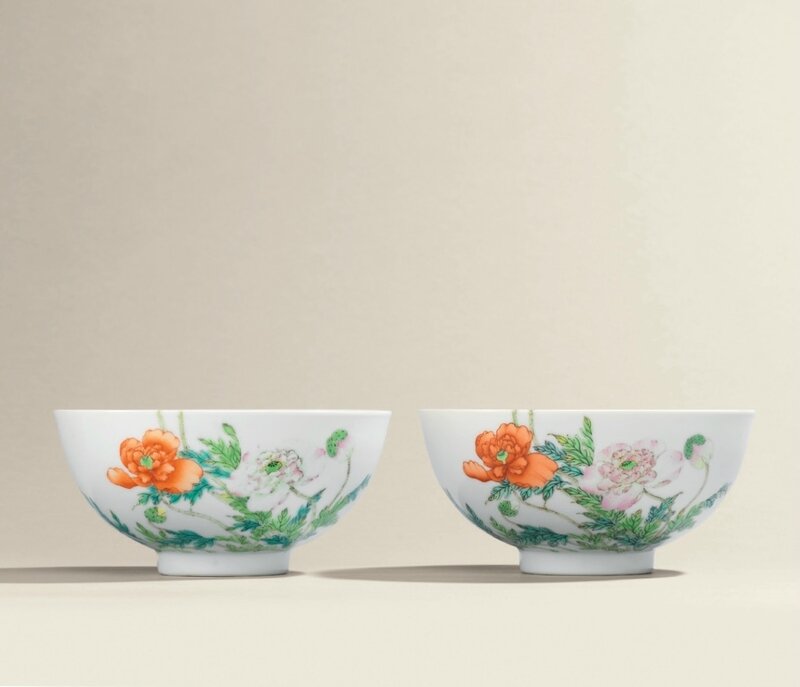 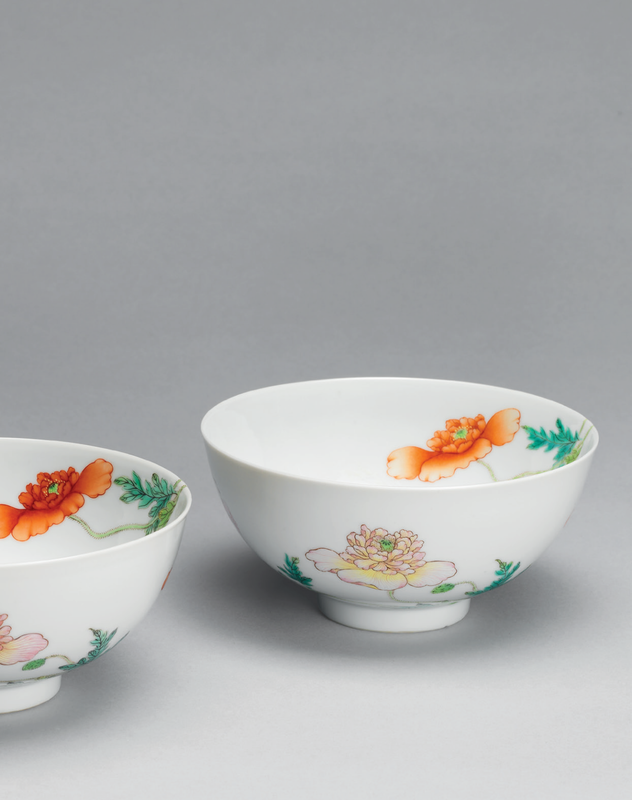 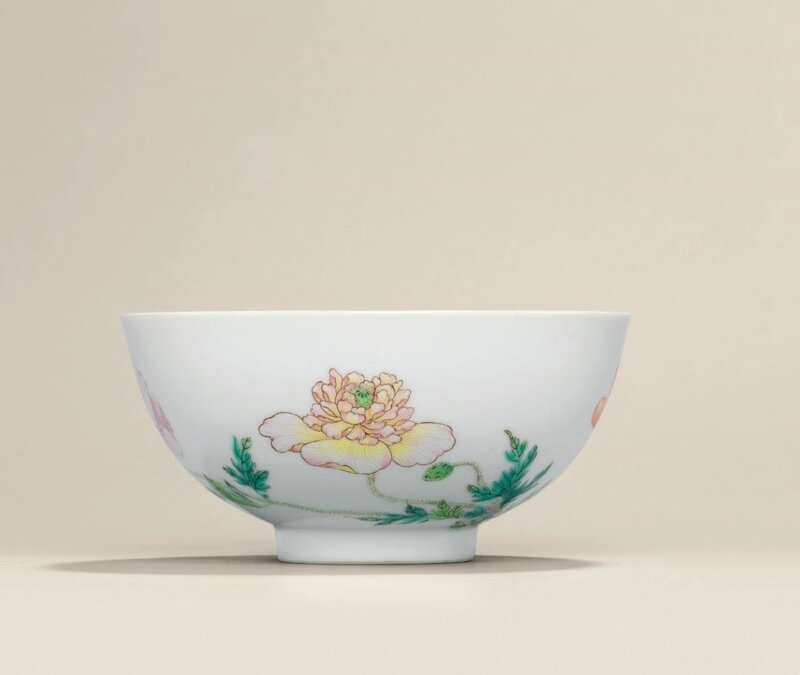 Each bowl is exquisitely enamelled on the exterior with poppies in different stages of bloom, with three shaded in pink and white with finely incised petals, and one in iron red, each borne on slender stems with naturalistically detailed bristles and leaves shaded in tones of bluish-green and yellowish-green. The design continues over the rim to the interior with a further three blooms. It is extremely rare to find imperial Yongzheng bowls of this size decorated with poppies. Even more rare and impressive is the fact that the decoration begins at the foot, continues up the exterior sides, and then extends over the rim to the interior of the vessels. This design concept was known as guozhihua - flowering branch passing over [the rim]. It was a technique which required great skill when depicting tree branches, but which required an even more skilful artist when depicting the slender, slightly angular stems of poppies. This decorative device was also sometimes known as guoqiangzhi (branch passing over the wall), which suggests the sound of the phrase changzhi, which in turn implies long peace under good government. This would provide a compliment to the reigning emperor and a wish for his longevity. On the current bowls this challenging composition has been beautifully conceived and brilliantly executed.

This particular type of decorative scheme, in which a flowering branch or stem was shown continuing from the exterior of a dish or bowl into the interior, first seems to have appeared on Chinese ceramics in the latter years of the Ming dynasty – in the second quarter of the seventeenth century. A blue and white ko-sometsuke bowl with grape vines depicted extending over the rim was published by R. Fujioka and G. Hasebe in Sekai Toji Zenshu, vol. 14, Tokyo, 1976, p. 275, pl. 268. This ko-sometsuke bowl was intended for the Japanese market and the use of the guozhihua design may reflect similar approaches to decoration seen on Japanese wares of the 17th century.

It was not until the Qing dynasty that this style of decoration seems to have gained popularity in China, and specifically appears to have won imperial favour. One of the earliest Qing dynasty examples of guozhihua can be seen in the collection of the Boston Museum of Fine Arts. The Museum has a rare white porcelain bowl, which was formerly in the collection of Paul and Helen Bernat. The bowl, which has been dated to the late seventeenth century, bears the name of the legendary potter, Hao Shijiu and is illustrated by Wu Tung in Earth Transformed - Chinese Ceramics in the Museum of Fine Arts, Boston, Boston, 2001, p. 149. This Boston bowl, which probably dates to the early Kangxi reign, has a subtle white slip design of prunus blossom running up the outside walls and into the interior of the vessel. Guozhihua decoration is, however, generally associated with especially fine famille rose porcelains of the Yongzheng reign, and is usually seen on ‘peach’ dishes, and occasionally ‘peach’ bowls, made for imperial birthdays. It is extremely rare to find this style of decoration with other motifs. Given the difficulty of such decoration it is not surprising that pieces decorated in this way are very closely associated with the emperor, or that the guozhihua essentially disappears after the end of the Yongzheng reign.

Such a decorative device, which involves taking the floral branch(es) or stem(s) from the junction of the wall of the vessel with the foot ring, up the exterior of a vessel, and into the interior, requires consummate skill on the part of the ceramic artist if it is to appear natural, as on the current bowls, rather than contrived. Because of the complexities of the scheme, guozhihua was more often used on dishes, where the more open surfaces made the task of painting it a little easier. Bowls, like the current examples, would have rendered the task more difficult because of the restricted working space, and thus required an artist of exceptional talent.

It is notable that extant smaller Yongzheng bowls decorated with poppies do not have this guozhihua decoration, but instead have scattered petals, nuts and fruit on their interiors. Indeed, two significantly smaller Yongzheng bowls with this type of poppy decoration on the exterior, but with scattered seeds, fruit and petals on the interior, are in the collection of Sir Percival David Foundation, London. While the current bowls have a diameter of 13.4 cm., the David Collection bowls have diameters of 9.1 and 9.3 cm. The latter bowls appear in Illustrated Catalogue of Qing Enamelled Wares in the Percival David Foundation of Chinese Art, Revised Edition, London, 1991, pp. 25 and 41, nos. PDF 821 and 878, with a black and white illustration of PDF 821. PDF 878 is illustrated in colour by Rosemary Scott in Elegant Form and Harmonious Decoration – Four Dynasties of Jingdezhen Porcelain, London and Singapore, 1992, p. 138, no. 157. PDF 821, which has gently flaring sides and a barely everted rim, has a six-character Yongzheng mark in underglaze blue within a double circle, while PDF 878, which has more typically rounded sides, has a six-character Yongzheng mark in underglaze blue within a single circle. A bowl from the Robert Chang collection, of similar size, shape and design to the second David Collection bowl was sold by Christie’s Hong Kong 31 October, 2000, lot 808, and again by Christie’s Hong Kong 27 May 2008, lot 1526 (fig. 1). An identical pair of small bowls was sold by Christie’s Hong Kong 3 November 1998, lot 961. The only larger Yongzheng poppy bowl, comparable to the current bowls, which appears to have been published, is in the collection of the British Museum, London (fig. 2). This bowl was donated to the British Museum in 1927 by the Oscar Charles Raphael (1874 – 1941). The diameter of the Raphael bowl is 13.5 cm. It is significant that, like the current bowls, the Raphael bowl has a six-character Yongzheng mark in underglaze blue within a double square on its base. This unusual feature is found on one other group of imperial Yongzheng famille rose porcelains. The finest and most delicate of the Yongzheng peach dishes with guozhihua decoration also usually bear Yongzheng six-character marks within a double square. It seems probable that this was a deliberate reference to the highly esteemed imperial doucai wares of the Chenghua reign, which at the height of their production, in the latter part of the reign, bore six-character reign marks within double squares – similar in style to those on the current bowls and the British Museum bowl. Both the current bowls are decorated with a naturalistic combination of red, pink and white, pink-tipped, poppies with leaves and buds. The extraordinary delicacy and detailed nature of the painting of these flowers is shown with especial clarity in the way that the stems and the pendant buds have been covered in tiny hairs. The petals of the red poppies provide examples of the finest painting in ironred overglaze enamel seen on any imperial famille rose porcelains. The enamel itself has been meticulously prepared, and the painter has applied it in such a way as to achieve delicately shaded colour and the impression of paper-thin petals translucent in the sunlight. The pink and white, pink-tipped, flowers display different, but equally skilled use of finely prepared enamels. On these the ceramic decorator has made full use of the famille rose palette to achieve great subtlety in colour and texture. Layering and mixing of pink, white, yellow and pale green enamels creates both naturalism of colour and a sense of the volume of the curling petals. The painter has not only painted the thread-like veins on some petals in a slightly darker pink enamel, but has also finely incised some of the petal veins, for an even more delicate appearance and texture. The decorator has used the incised veins particularly effective on the white, pink-tipped poppies. The refined Yongzheng palette has also been used to its full potential on the leaves, where shades of green blend from one tone to another, while the tips of the leaves sometimes shade to either a bluer tone or to a delicate yellow. The blossoms themselves were clearly painted by an artist who was either very familiar with these flowers, or was working with the actual flowers in front of him. Each detail is naturalistically shown – from the stamens and carpels in the centre of each blossom, to the typical slight angularity of the stems and the distinctive way in which poppy buds open.

Poppies have numerous names in China, including yumeiren (beautiful woman). One of the traditional names for poppies is jinbeihua -literally ‘brocade quilt flower’, and as such it suggested ‘clothed in brocade’ - a reference to the fact that high officials wore brocade. Poppies were sometimes depicted accompanied by peonies to suggest the wish ‘clothed in brocade and enjoying wealth and honour’. Poppies were also a popular choice among painters on silk and paper in the late 17th and early 18th century. Among the ten album leaves in ink and colour on paper, entitled Flowers and Plants by Yun Shouping (1633-1690), in the collection of the Palace Museum, Beijing, and dated to AD 1685, is a leaf depicting red poppies (illustrated by E. S. Rawski and J. Rawson (eds.) in China – The Three Emperors 1662-1795, London, 2005, p. 330, no. 251). In the collection of the National Palace Museum, Taipei, there are surviving leaves from an album of flower paintings by Zou Yigui (1686-1772). Leaf twelve from this album, which depicts chrysanthemums, bears an inscription which includes the date ‘fourth summer month of the jiayin year of Yongzheng’, equivalent to AD 1734. Leaf eight in this album depicts red, pink, purple and yellow poppies. The album leaf is illustrated in Harmony and Integrity –The Yongzheng Emperor and His Times, Taipei, 2009, p. 300, no. II-108. Interestingly, on this album leaf Zou Yigui was at pains to indicate the delicate veins on the petals and the fine hairs on the stems and buds, and was also careful to indicate the slight angularity of some of the stems - features which can also be seen in the painting on the current bowls.

Poppies were a theme embraced not only by Chinese artists, but also by the European Jesuit artists at the Qing court. The most famous of these, Giuseppe Castiglione (Lang Shining 1688-1766), painted poppies on several occasions. Leaf number five from the album Immortal Blossoms of an Eternal Spring, preserved in the collection of the National Palace Museum, Taipei, depicts a red poppy and a purple iris beside a rock. This album leaf is illustrated in Harmony and Integrity –The Yongzheng Emperor and His Times, op. cit., p. 324, no.II-118. Another leaf from the album, Immortal Blossoms of an Eternal Spring, depicts red, pink, purple and yellow poppies with ragged petals. In both depictions of poppies Castiglione, like Zou Yigui, emphasized the slight angularity of the poppy stems and the pendant buds. However, while the initial inspiration for the depiction of multicoloured poppies on these extremely rare bowls may have come from paintings on silk or paper, the painting on porcelain was innovative and exquisitely executed. The use of guozhihua on the bowls, with its implicit complement to the emperor, has been accomplished with consummate skill.