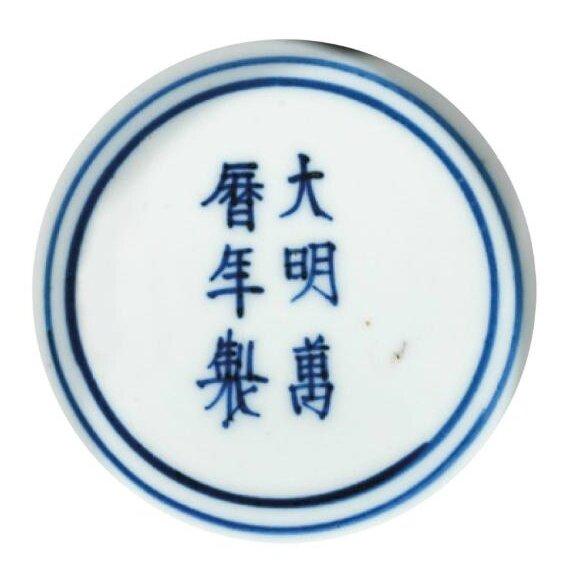 The deep bowl is painted in cobalt of deep sapphire-blue tones with a pair of sinuous five-clawed dragons striding amid clouds in pursuit of flaming pearls, above a band of linked ruyi-heads. The centre of the interior is painted with a double-line roundel enclosing a dragon and a phoenix in flight amid lotus scrolls.

Note: It is very rare to find a bowl in this design and size from the Wanli period. The current bowl was probably made during the early Wanli period as bowls of similar patterns can be found on Longqing-marked examples, such as one of comparable size (22.5 cm. diam.) from the collections of Woodbridge, Mr. and Mrs. Eugene Bernat, and Dr. Ip Yee, sold at Sotheby’s Hong Kong, 19 November 1984, lot 189, and a smaller bowl (12.7 cm. diam.) from the J.M. Hu Collection, sold at Christie’s New York, 20 March 2014, lot 2116, but with a double- and single- dragon roundel on the interior, respectively. Compare also, to a larger (36.5 cm. diam.) Wanli-marked bowl of similar design on the exterior but also a single-dragon roundel on the interior, sold at Christie’s Hong Kong, 29 April 1996, lot 683.