An exceptionally fine and rare copper-red and underglaze-blue amphora, Yongzheng mark and period (1723-1735)

An exceptionally fine and rare copper-red and underglaze-blue amphora, Yongzheng mark and period (1723-1735) The vase is delicately potted with an elongated ovoid body tapering to a recessed base, the sloping shoulder rising to a slender neck encircled by three horizontal raised bands. The shoulders are painted in underglaze blue with a band of bagua trigrams above four yin-yangsymbols around the body, above a register of cresting waves in underglaze red around the base.

Provenance: Acquired in Europe in the 1960s
Sold at Sotheby’s Hong Kong, Eight Treasures From A European Collection, 8 April 2009, lot 1602

The form of this vase is particularly elegant, and its specific proportions and details are rare amongst Yongzheng imperial porcelains. The shape derives from one that was popular among imperial wares of the Kangxi reign – particularly those belonging to the small group of peachbloom-glazed vessels, known as the ba da ma (eight great numbers), which the English scholar John Ayers believes may have been made specifically for the Kangxi Emperor to bestow as gifts on favoured members of the court (see John Ayers, ‘The ‘Peachbloom’ Wares of the Kangxi period (1662- 1722)’, Transactions of the Oriental Ceramic Society, vol. 64, 1999-2000, pp. 31-50). The close association with the imperial family is borne out by a similarly shaped peachbloom vase in the collection of the Walters Art Museum, Baltimore (accession number 49.155), which is reputed to have been owned by the first Prince Yi (1686-1730), thirteenth son of the Kangxi Emperor. John Ayers’ extensive research has led him to the conclusion that such peachbloom vessels were made in the latter part of the Kangxi reign, which would explain the transfer of the form into the Yongzheng period. 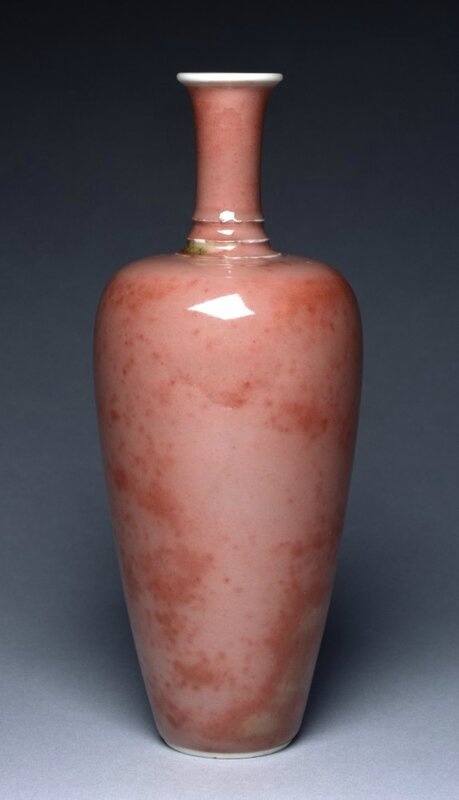 It is interesting to note, however, that the proportions of the vase were subtly altered in the Yongzheng reign. While it retains the three fine raised rings around the base of the neck, which has led to the Kangxi peachbloom shape sometimes being called san xian ping (three-string vase), the Yongzheng vase has a neck and mouth which are somewhat wider and in more harmonious proportion to the body of the vessel. The body of the Yongzheng vase also has less square shoulders than the Kangxi form, while the mouth is more everted, giving it a softer and more graceful profile. This shape is listed as a laifuping – radish [shaped] vase – by Geng Baochang in his discussion of Yongzheng shapes in Ming and Qing Porcelain on Inspection, Beijing, 1993, p. 234, fig. 400, no. 11, whereas Geng describes the Kangxi version of this form as a laifuzun radish [shaped] wine vessel in the same volume p. 193, fig. 344 left, and fig. 387 top left. A Yongzheng vase of this form, but decorated entirely in underglaze copper red with a design of dragons in clouds above waves, formerly in the collection of Sir Harry and Lady Garner, is now in the Victoria and Albert Museum (illustrated by Rose Kerr (ed.), The T.T. Tsui Gallery of Chinese Art – Chinese Art and Design, London, 1991, p. 193). A similar Yongzheng copper red decorated vase is also in the collection of the Metropolitan Museum, New York (illustrated in S. G. Valenstein, Handbook of Chinese Ceramics, New York, 1975, colour plate 36). Interestingly, the waves which encircle the lower part of the V and Metropolitan Museum vases are painted in a similar style to those on the current vase. The fine-line – sometimes known as ‘pencilled’ – style, in which the underglaze red waves on the current vase are painted, originated in the Kangxi reign when it was applied to both copper red and cobalt blue underglaze decoration (see Wang Qingzheng (ed.), Kangxi Porcelain Wares from the Shanghai Museum Collection, Shanghai and Hong Kong, 1998, p. 109, no. 72, and p. 61, no. 41, respectively). The style was also adopted by Yongzheng ceramic decorators, but relatively rarely. This is understandable in the case of vessels painted in underglaze copper red, for the difficulty in controlling the copper made its use problematic. When successfully-fired, as on the current vase, however, this fine-line decoration could be extremely effective, especially in the portrayal of movement without heaviness.

In some cases this style of painting was used to create a naturalistic depiction of waves, while in others it is very formal. In contrast to the current vase, a much more mannered, even regimented, depiction of underglaze copper red waves can be seen on a Yongzheng meiping in the collection of the Palace Museum, Beijing (illustrated in Blue and White Porcelain with Underglaze Red (III), The Complete Collection of Treasures of the Palace Museum 36, Hong Kong, 2010, p. 187, no. 171). While successfully fired, the waves on this vase, which provide a background for one large and one small carved dragon, reserved in white, are very uniform and appear more like a background pattern than naturalistic waves. The difficulty of firing such precise undulating wave designs in underglaze copper red can be seen on a lidded vase in the collection of the National Palace Museum Taipei, which is also decorated with carved dragons reserved in white against a background of underglaze red waves (illustrated in Harmony and Integrity – The Yongzheng Emperor and His Times, Taipei, 2000, p. 175, no. II-8) in similar style to those on the Beijing meiping. The copper red on the Taipei vase has both spreadwithin the glaze and, in some areas, broken through the glaze. The result is that the fine lines of the waves are significantly obscured and the overall impression is much heavier than was the ceramic artist’s intention. Interestingly, this vase was nevertheless preserved in the imperial collection of the Qing court, despite its flaws – a clear indication that the difficulties of this type of decoration were recognised. The preservation of a vase with imperfect copper red wave design also underlines the additional esteem in which a welldefined underglaze copper red wave design, such as that on the current vase, would have been held at the imperial court.

A less constricted style of waves in underglaze copper red can be seen on a Kangxi urn in the collection of the Palace Museum Beijing (illustrated in Blue and White Porcelain with Underglaze Red (III), The Complete Collection of Treasures of the Palace Museum 36, op. cit., p. 208, no. 190). These waves are closer in style to those on the current vase. The waves on the urn are drawn in fine lines, and have both undulating waves with breaking crests, and rolling spume, like those on the current vase. The difference is that the Kangxi urn has small circular bubbles amongst the waves, while the current Yongzheng vase only has them on the tips and upper edge of the waves – highlighting the dynamic form. It is also interesting to note that the extraordinary finesse and control seen in the decoration of this vase is in complete contrast to the somewhat more informal approach to underglaze copper red and cobalt blue decoration seen on vessels such as the Yongzheng double-gourd flask in Ming style in the collection of the Tianjin Municipal Museum (illustrated in Porcelains from the Tianjin Municipal Museum, Hong Kong, 1993, no. 146).

The blue and white decoration on the current vase is also of considerable interest since it comprises the taijitu and the Eight Trigrams. The divided circle known as the taijitu is a symbol representing the ‘great ultimate’ in both its singular and dual manifestations. The whole taijitu is made up of five parts, and the part represented on this vase, which is known either as taijitu or yinyang symbol, is in fact the second part of the whole. (It was the Song dynasty Confucian scholar Zhu Xi ( AD 1130–1200) who described taiji as the alternating principle of yin and yang.) The taiji diagram was introduced by the Song dynasty philosopher Zhou Dunyi (AD 1017–73) in his Taijitu shuo (Explanation of the Diagram of the Supreme Ultimate), which synthesized aspects of Chinese Buddhism and Daoism with metaphysical discussions in the Yijing (The Book of Changes). This became an important aspect of Neo-Confucian cosmology. The diagram is combined with the Eight Trigrams (bagua) and called the ‘River Chart spontaneously generated by Heaven and Earth’. Zhao Huiqian (AD 1351–95) appears to have been the first to introduce the “swirling” variant of the taijitu in the 1370s, in his Liushu benyi. The underglaze blue taiji symbols on the current vase are also combined with the Eight Trigrams, also in underglaze blue. In the Daoist canon compiled during the Ming dynasty there were a number of variants of this taijitu, and it appears to have been the Ming dynasty writer Lai Zhide (AD 1525–1604) who simplified the taijitu into two interlocking spirals.

With the addition of the two contrasting dots in the later Ming period, the symbol became associated with ancient He tu ( Yellow River Map) of antiquity.

The Yongzheng Emperor was known to have been deeply committed to imperial Confucian teachings, enjoyed Confucian political discourse, and justified the policies adopted during his reign through classical allusions. He defended Qing rule in China on the principles of legitimacy drawn from the writings of Mencius. He was also a keen adherent of Chan Buddhism, which also influenced his decisions in government. However, he was additionally interested in Daoism, being an intensely superstitious man, who sought to understand omens and believed in Daoist techniques for longevity. It is not, therefore, so surprising to find the taiji symbols and the Eight Trigrams on this vase.

Yongzheng vases of this form with similar decoration are very rare. A pair of these vases was included in an exhibition of Coloured Chinese Porcelain held by the Burlington Fine Arts Club in 1896, nos. 475 and 476. These vases, which belonged to George R. Davies, were illustrated by W. G. Gulland in Chinese Porcelain, vol. II, London, 1911, no. 655. It seems likely that these vases were sold individually by Sotheby’s Hong Kong in November 1979, lot 224 and November 1980, lot 316, with the vases being sold again by Sotheby’s Hong Kong in May 1994, lot 192, and Sotheby’s New York in March 1998, lot 677. A further similar vase was in the Meiyintang Collection (illustrated in R. Krahl, Chinese Ceramics in the Meiyintang Collection, vol. 4, London, 2010, no. 1707). The current vase was discussed by R. P. Marchant, ‘Some Interesting Pieces of marked Ch’ing Porcelain’, Hong Kong O.C.S. Bulletin, no. 3, 1977-78, figs. 57-59, where the author also mentions a companion vase in the Avery Brundage Foundation.

Comparing the shape and the decoration of this vase to imperial porcelains of the Kangxi reign, it seems likely that the vase was made in the early years of the Yongzheng period. The Yongzheng Emperor was known for his refined tastes and his insistence on perfection, and this exceptional and rare vase reflects many of the finest aspects of porcelain made for this exacting imperial patron. The body material is of the finest quality, the potting is extremely accomplished, the shape is graceful, and the decoration is beautifully painted and skilfully disposed over the vessel to complement the form, to allow each element adequate space and to allow the pure whiteness of the body material to be appreciated.